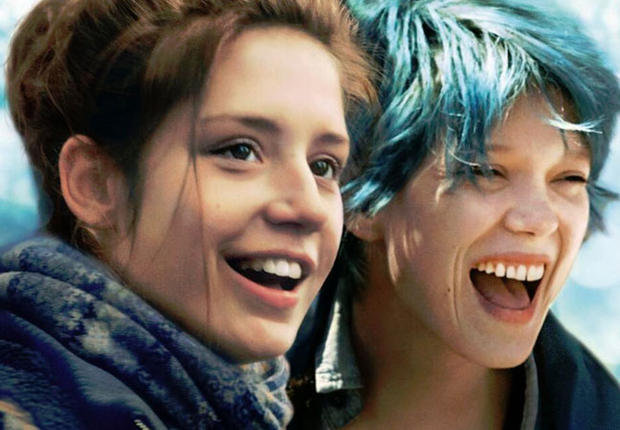 Blue Is the Warmest Color

It’s 9:30 on a Monday morning, and I’m sitting in a theatre watching a borderline-hardcore lesbian sex scene that goes on for a good 10 minutes. I shift in my seat uneasily, mindful of the fact that CBC Radio’s Jeanette Kelly is sitting only a few seats over. It’s just another day at the office for the Cult MTL Screen Team.

The film is Blue Is the Warmest Color, a coming-of-age love story between a teenage student (Adèle Exarchopoulos) who falls in love with a 20-something artist (Léa Seydoux) and the passionate, tumultuous relationship that follows. It’s the latest from director Abdellatif Kechiche, best known in the anglo world for his 2007 drama La graine et le mulet (The Secret of the Grain).

He’s a filmmaker who likes to push buttons, and with his latest he certainly has, starting with those of his own collaborators. At the Cannes festival, where it won the Palme d’Or, stars Exarchopoulos and Seydoux made some candid comments to the press about Kechiche’s harsh treatment of them during shooting. Julie Maroh, who wrote the comic from which the film was adapted, accused Kechiche of not giving her enough credit and of making an inaccurate portrayal of lesbian love. Meanwhile, members of the production crew also publicly condemned Kechiche for his long, hard working hours, which they claimed contravened France’s strict labour laws.

DISCOMFORT ZONE
Kechiche and his two stars were in Montreal a few weeks ago for a premiere screening. Following the Cannes war of words, an interview scheduled to take place with the director and stars was broken up into three individual sit-downs. Exarchopoulos was friendly, candid and articulate beyond her 19 years; Seydoux, a model/actress who’d had a pro make-up job done because she thought the interview was for TV, was pleasant but intimidatingly glamorous. Kechiche, meanwhile, was guarded, offering brief and carefully worded answers to my questions.

Thrown on top of the intensity of the film itself, it made for an interesting press day. The atmosphere was somewhat tense, with the recent spat the elephant in the room; it felt somehow outré to talk about it, yet impossible not to.

Kechiche is known for an intense working method. “He looks for a really strong emotional state,” says Seydoux, “for a moment where you forget the camera, when you lose yourself a bit or have no self-consciousness.” This comes about by throwing away the playbook, she explains: “He doesn’t follow the script; he has ideas that come to him. There’s improvisation; he’ll wake up one morning and say, ‘Why don’t we try this?’ There’s something very alive.” Kechiche, for his part, says that “I’m a bit of a navigator. I adapt to what the film imposes on me.”

It was this method, with its resulting long and arduous shooting days, that led to the well-publicized conflicts. “It was a great human adventure. There were great highs and lows,” says Exarchopoulos, who admits with a laugh that, “Now I know to choose my words more carefully in interviews.”

“It’s not that it disappointed me, but it surprised me,” says Kechiche of the crew revolt. “Nobody said anything at the time, and I didn’t force anyone to accept what I suggested.” He adds: “In an artistic métier, if you only do your job for money, you’re doing it wrong.” He’s equally cutting about the actresses’ complaints: “When you’re an actor or a director and you’re given a voice to illuminate the problems of real life, it’s indecent to complain about it when you live in this privileged world.”

According to Exarchopoulos, the spat has been somewhat resolved: “It’s like a couple—you can yell at each other, and afterwards it’s better.” Seydoux, clearly more than a little tired of the topic, says, “We spoke to each other, and it was good to get things out. Beyond that, I think the film deserves more attention than the rest.”

LOVE HURTS
It’s a fair enough comment, so let’s talk about the film. It’s visually gorgeous, complex, powerful and grounded in two quite amazing performances from Exarchopoulos and Seydoux. It’s also three hours long and emotionally draining. From my point of view, the infamous sex scenes are just a microcosm of the story’s focus on young adulthood, a time in life when passions run high, emotions are raw and you learn hard lessons by making terrible mistakes, causing pain to yourself and others.

“It interested me less that they were two women than that they came from different social classes,” says Kechiche. Seydoux’s bohemian-bourgeois family embraces her girlfriend, while Exarchopoulos keeps her sexuality hidden from her working-class parents. It offers a glimpse into a schism in French society that was brought to light recently with the vicious protests against gay marriage in the supposedly progressive country.

But there’s no denying that Kechiche is fascinated by women. There’s even a somewhat meta scene in which art-world types talk about the male gaze and the depiction of women’s bodies throughout the history of art. Exarchopoulos says that even though she was warned of the difficult conditions of working with the director, she accepted because “he’s known for doing justice to women—to their power, their beauty, their mystery.” ■

Melo is at long last teaming up with LeBron James.