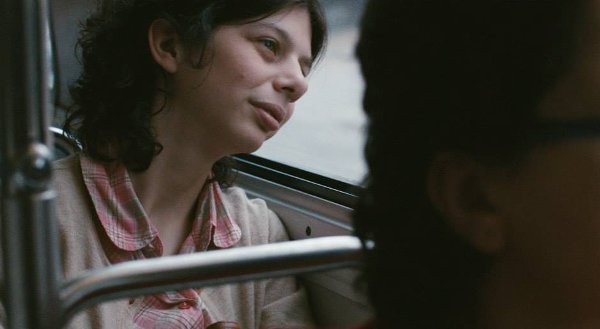 The producers behind the Oscar-nominated films Incendies and Monsieur Lazhar, Kim McCraw and Luc Déry, have a new film that’s getting a lot of buzz: Quebec filmmaker Louise Archambault’s second feature-length drama, Gabrielle. At the Festival du Film francophone d’Angoulême last month, it brought home the Valois Magelis, which is given by the student jury, and Alexandre Landry took home the Valois for best actor. It also received an audience award at the Locarno film fest in Switzerland.

At its most basic, the film is about 22-year-old Gabrielle (Gabrielle Marion-Rivard), a woman with Williams syndrome, falling in love with Martin (Alexandre Landry), a friend from her chorus group who also has a developmental disorder. Reading the synopsis, parallels can certainly be drawn between it and the 1999 Garry Marshall film The Other Sister, where Juliette Lewis and Giovanni Ribisi play an equally challenged couple, navigating their desires for independence and sexual exploration — but there are some marked differences. Most importantly, Marion-Rivard actually has Williams syndrome. So this leaves your Forest Gumps, Sam Dawsons, Raymond Babbitts and Arnie Grapes behind. The film also relies heavily on music, using lyrics and instrumentals to express emotions and ideas, where dialogue would fall short.

Martin’s mother (Marie Gignac) isn’t okay with the relationship. She tries to keep Martin away from Gabrielle as she feels that the pair don’t understand the repercussions of sexual acts. This brings up difficult ideas like the sterilization of people with mental disabilities, but the film never truly dives into these discussions. I feel like we’re offered a glimpse into one idealistic and complex world but there’s a lack of realism because questions aren’t addressed, regardless of Marion-Rivard’s impressive and touching performance.

The film does have some brilliant moments. It takes a really good stab at addressing the frustration that would accompany adulthood for someone with a developmental disorder. But overall, Gabrielle and Martin’s relationship moves too quickly, ignoring questions in favour of a happy resolution.