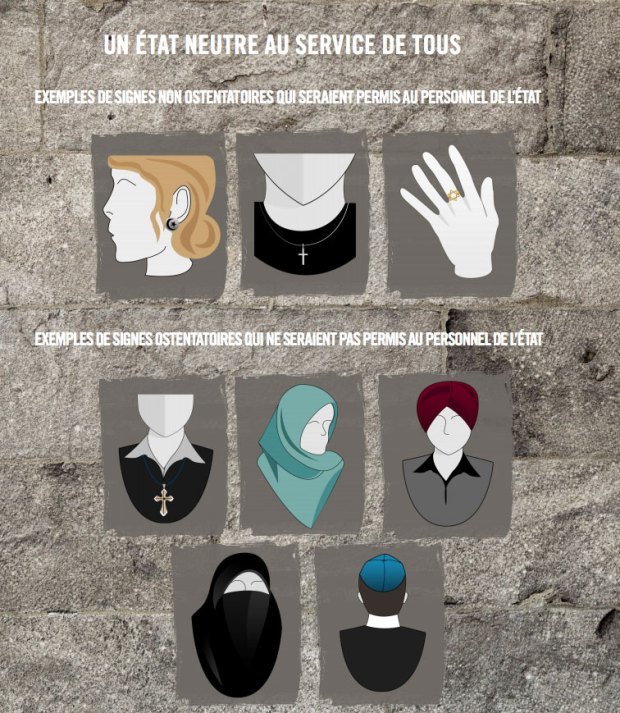 This Quebec government illustration, which shows the types of clothing and jewellery that would be forbidden under the province’s new charter, has an appropriately medieval motif.

For the first time in my life, I am ashamed to be a Quebecer.

My belief in the openness and tolerance of Quebec society has been profoundly shaken in recent weeks as the Parti Québécois government exploits the worst prejudices and fears of its electors.

I say electors because that’s what it’s all about. In a desperate bid for re-election, the minority PQ has produced a Charter of Quebec Values tailor-made to appeal to religious intolerance within the population.

No less a political expert than François Legault, head of Coalition Avenir Québec, confirmed this a few weeks ago when, explaining why his party would back portions of the leaked PQ plan, he told reporters this:

Let’s see. What happened in 2001? Twelve years ago to this very day, four coordinated Al Qa’ida terrorist attacks on the United States resulted in the deaths of nearly 3,000 people.

So what, exactly, are Quebecers afraid of since 9/11? The sad, simple answer is not “terrorists.” The answer is Muslims.

Like many in the United States and elsewhere, a significant number of Quebecers fear Islam, a religion about which most non-Muslims know next to nothing. It’s this fear that the PQ is hoping to exploit with the charter, a concept that many have rightly ridiculed as a solution to a non-existent problem.

At least Legault was being honest when he hinted that prejudice against Muslims, especially since 9/11, was the driving force behind the charter proposal.

Poll after poll has shown strong support in Quebec (even among anglophones) for imposing restrictions on religious minorities, especially in the regions where the fewest members of those minorities live. It’s Hérouxville writ large, and its focus, once more, is Islam.

If you want confirmation of this, all you need to do is read the online comments of any articles or op-ed pieces on the issue. Be warned, however: you too may quickly lose faith after reading the frequent vitriol.

It’s no coincidence that the PQ’s proposed charter is aimed at banning “visible” religious symbols, which most affects the Islamic, Sikh and Jewish communities. It’s rare that Catholics these days wear anything that identifies them as such, and, in any case, even the most devout Catholic is not required to wear religious attire or jewellery.

Bernard Drainville, the PQ minister piloting the charter, has been telling media this week that Catholics gave up their symbols in the ’60s, so now it’s the turn of the other religions. Having grown up Catholic in that era, I can confidently call “bullshit.” Religious influences were everywhere in our schools, from crosses in the classroom to obligatory religion classes to annual Christmas pageants. Maybe the nuns no longer wore habits to class, but wasn’t that merely an indication that they were never required to wear them in the first place?

Even more worrying, Drainville has said that the government hopes private enterprise will follow suit, ensuring even greater economic alienation of religious minorities.

Let’s be straight: the chances of the PQ plan seeing the light of day are slim to none. Opposition is growing daily from all quarters, and even the Bloc Québécois has refused to endorse the charter because its own policies call for restrictions only at the level of judges and the police. Then there are the inevitable legal challenges that will keep any legislation tied up for years.

But getting this turkey adopted isn’t the PQ’s primary objective. Instead, it hopes to carve out a role for itself as the defender of the Holy Grail of secularism, the heroic government unafraid to challenge the heathen hordes who dare to cover their faces and their heads when it isn’t even snowing out.

It wants to lock up the redneck vote in hopes of winning the next election, and being defeated on the charter achieves this better than anything else.

Meanwhile, unfortunately, Quebec is building a reputation for religious intolerance that will drive many of its citizens to leave in disgust and will dissuade future generations of immigrants from moving here.

And I wouldn’t blame them one bit. I’m disgusted — and I’m an atheist. ■