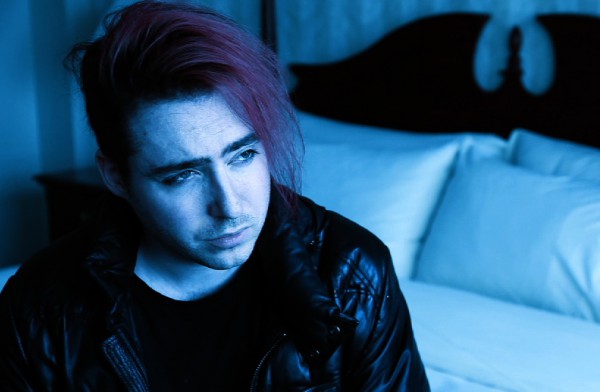 J. Deeh frontman of the Scroll

The event is followed by their opening party at Cabaret Underworld that will feature local band the Scroll, who have provided tunes for the fest’s trailers and marketing campaign. I had the opportunity to chat with the Scroll’s frontman and filmmaker Jason Deeh Pitre (J. Deeh) about his involvement with the festival and what we can expect from tomorrow’s performance.

“Florence Touliatos [founder of Mascara & Popcorn] contacted me after hearing some Scroll tracks. She thought it fit with the Mascara & Popcorn visuals,” says Pitre. “At first I didn’t think so, but when I heard the Scroll songs in the promos, it all seemed to fit. I’m not a big fan of horror, but our songs do have a sort of hidden depravity. I always saw the Scroll as the soundtrack for Patrick Bateman (American Psycho), I’m a huge fan of Bret Easton Ellis — it’s all gloss on top, but darkness at the bottom. So, in a way, it fits Mascara & Popcorn. After a couple of weeks of chatting online, she asked us to headline the festival’s opening party. I think a friend in her circle saw us live and recommended the band.”

The fest differs from other Montreal offerings due to its selection of films — it’s not for the faint of heart, as it only shows horror, experimental, film noir, horror comedy, dark comedy, dark fantasy, dark animation, science fiction and drama genres.

“Mascara & Popcorn is important because it supports underground films. That kind of support is very important these days. Of course, Fantasia touches some of the same genres that M&P does, but I think it comes from a different place. Its focus is more on short films and it’s somewhat grittier. I see M&P as Fantasia’s evil twin chained in the basement,” says Pitre.

Since he’s also a filmmaker himself, Pitre hopes to tie his two loves together with the Scroll’s performance tomorrow night at Cabaret Underworld. “They can expect a seven-piece band playing some intense electro/shoegaze/indie-type music to get you dancing,” he says. “Lately, we’ve added a sax player and it really helps our sound. A lot of people are comparing the new album [Constant Public Humiliation] to M83 and Primal Scream, but our influences are all over the map. We don’t like to stay in one place for very long.”

“During our performance on Thursday we’ll have interesting stuff projected on screen and I’ll also show some footage from my new feature film Do You Truss Me?,” says Pitre.

After two days and three short film competitions, the festival will come to a close on Aug. 18 with yet another party and an awards gala hosted by local director and spokesperson Patricia Chica.

“If you like films on the strange and/or macabre side and love to party, check it out — it’s better than sitting at home doing nothing, or shopping for shoe trees,” says Pitre. “I’m stoked to see everything. I don’t rely on trailers to get me excited. I’m definitely gonna see every film.” ■

You can also check out their new music video directed by J. Deeh below:

It is rumoured that Eminem has stayed away from acting due to developing a pill addiction during the filming of 8 Mile.

An interview with the former Montrealer, YouTube sensation and Dessert Person author.