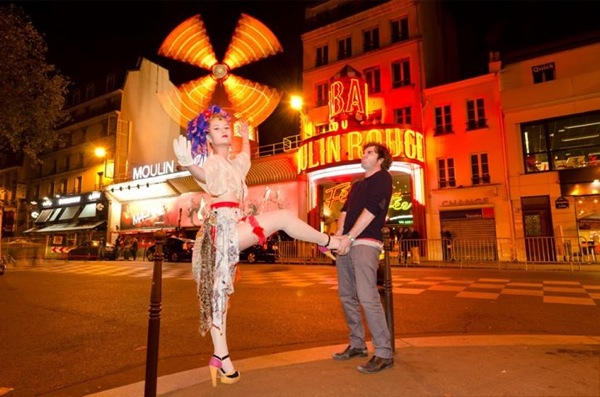 Zoofest is the hub for theatre this week. Here’s how it all looks.

There are Beaconsfield teens who have tried more sexually in grade nine than your average North American will in a lifetime. Montrealers won’t be too shocked by slut (r)evolution, the autobiographical journey of a Mormon who comes to terms with her predilection for unconventional sex. Cameryn Moore’s globe-spanning exploits with the word “yes” put her in some tight spaces. Neither delicate nor hesitant, she charges into her battles like a knight on a crusade. Of course, this kind of undaunted certainty leaves a few unaccounted-for casualties. No one wants to see her thwarted because of a Russian thief, but there’s something more deeply reflective to be said about incessantly cheating on a monogamous partner of eight years. I was curious how that painful conversation may have gone down. Less ambiguous and more celebratory, Moore presents as an undefeated mythic hero for the kinky.

Who hasn’t dreamed of turning a remote Caribbean Island into an independent state? While it’s good to be king, the finer points of sovereignty are tough to handle alone and it’s hard to get your friends to come down for a long weekend. Let’s Start a Country gets into the nitty-gritty of nation building. Gerard Harris relies on audience input to define the new state, creating a flag, a religion and other necessary aspects. Back-up comes from Poet Laureate Shane Admaczak, whose kooky characters are a perfect foil to Harris’s smart wit. The show proves far more fun than it probably should be, a bit like doing MadLibs with someone who can come up with better adjectives and plural nouns than “sticky” and “monkeys.” For example, Jon Benett (see below) was chosen from the audience as the resident king, so we got masturbatathons as our primary fighting style. Is there anything a diligent thespi-o-phile should expect? Improvisational one-liners, amusing tales of real breakaway nations and infectious energy. A maple leaf crown goes to Holly Frankel-Gauthier for her patriotic role as minister.

Skateboarders and graffiti artists see the world differently from those who don’t partake of such activities—every concrete surface becomes an opportunity to express one’s art. Jon Bennett sees the world differently too—he sees a penis where most people see an object that is longer than it is wide. In Pretending Things Are a Cock, Bennett takes the audience on a slide show tour of “cocks” he’s created around the world by positioning himself at the optimum camera angle. Some are obvious (Big Ben in the U.K.), and some are far more creative (the Hollywood sign, a dachshund). Cock-shaped objects alone do not a show make. Not to worry. In addition, Bennett is a gifted storyteller. He pauses on memorable “cocks” to recount their backstories, making us believers in his mission. You will leave with an ability to spot cocks everywhere.

Yanomi Shoshinz and Cherry Typhoon productions possess the same ethos as Sanryo’s Hello Kitty vibrator: equal measures of childlike cuteness, queer sexuality and giddy enthusiasm. Their latest, The Bad Ladies and the Detective, is a gender-bender backdrop for burlesque performances. Detective Stormy is under orders from a disembodied, authoritarian “Grandmother” to put an end to Lady Josephine’s burlesque club. However, Stormy has a secret yen for the lovely host. Will the “beautiful and peaceful” art form of burlesque outmanoeuvre Stormy’s machinations and survive to save the world? Fun, atmospheric burlesque acts that change from night to night are set within the zany, anti-authoritarian plot. In particular, straight from the world of The Great Gatsby, Lady Josephine holds her own with a 1920s comic sensibility. At times, Bad Ladies is eye-rollingly silly, and yet, somehow, still fun.

I don’t know who I was more embarrassed for when I saw a woman reading Fifty Shades Freed on the metro: her—not because she was reading BDSM erotica, but because she was peacocking to all passengers that she had tolerated three books worth of sloppy writing—or the guy watching her read, because he was tent-pole turned-on by it. “My subconscious is furious, medusa-like in her anger, hair flying, her hands clenched around her face like Edvard Munch’s Scream.” I don’t know what it is about Fifty Shades that brings out my malicious snark, but even Spank! A Fifty Shades Parody (and musical), playing at Centaur Theatre outside of JFL, annoys me. But I suppose most people who go won’t have tortured themselves with more than a page of the original anyway. They’re just curious what can be done to dress up the sweet manure of this mind-numbing commercial success. My inner goddess cringes to think they might go because they actually liked it. I know, I know—call me judgmental. I am a critic, after all. ■