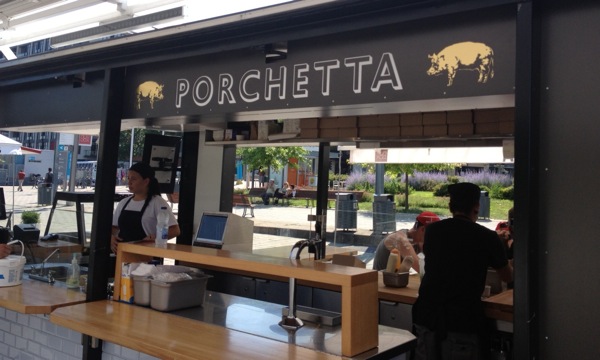 Many food fans know Muvbox, the movable solar-powered food stall in the Old Port with a diminutive menu: lobster rolls, clam chowder and pizza. This year, Muvbox has opened a second spot, just adjacent to the original — it’s called Porchetta, and it also features a focused menu that’s heavy on the porcine options. (There’s also a small candy-covered frozen yoghurt place nearby, which by my count covers all the food groups).

Porchetta’s go-to move is their eponymous sandwich: Italian-style fatty chunks of slow-cooked pork served on either a two-inch or four-inch ciabatta bun with arugula and your choice or herbed mayo, spicy pesto or Dijon sauce ($5.50–$8.50). I opted for the herbed mayo and was rewarded; it cut the grease on the tender cut of braised pork and complemented the arugula and the pork’s jus perfectly, although I’d happily take a bit more garlic kick in the sauce.

Next up, I tried their Polpotte sandwich (effectively a fancy name for a meatball sub), with herbed minced pork balls in a light tomato sauce, again served on ciabatta ($7.50), with a portion of antipasti on the side ($4). On the sandwiches, the meat portion was generous, with four fat, perfectly cooked balls, and the tomato sauce tasted of Roma tomatoes and fennel, however the antipasti marinated vegetables were pretty unremarkable (although apparently I missed out on a killer lentil salad that’s often on offer).

Everything was tasty, but at sit-down restaurant prices, it’s a bit of a tough sell on the wallet. The OG Muvbox remains my go-to for easy seafood, but Porchetta might have to step up their game a bit to compete with the legions of food trucks now prowling Vieux Montréal or risk remaining strictly for the tourists. ■