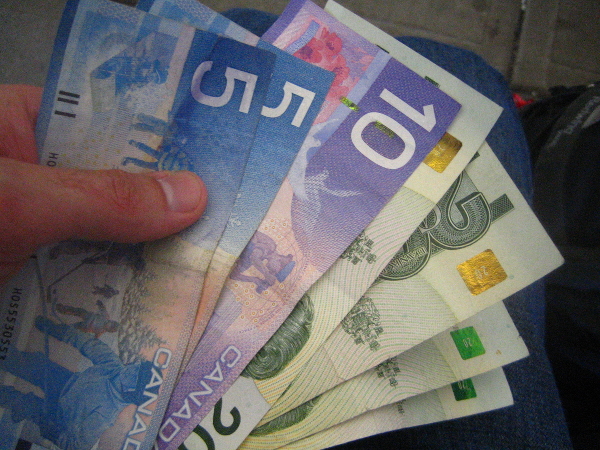 Cash, something our former mayor will collect a lot of. Photo via Flickr

So Michael Applebaum is out of office, as we all know, but, if not his dignity, what did he get to take with him? Well, for one thing, a severance package totaling just under $268,000, including $108,204.90 in departure pay and $159,719.00 in a “transitional allocation,” whatever that means. He’s now going to fight 14 charges — fraud, conspiracy and so on — that he’ll be arraigned on in October.

The death toll in Lac Mégantic continues to climb, with five more bodies identified, bringing the total to 42. The question remains, though: Did engineer Tom Harding follow protocol with regard to setting the locomotive’s hand brakes? It’s complicated and upsetting to consider, so we’ll let you make of Andy Riga’s Gazette article what you will.

The Transportation Safety Board wants immediate changes to rail policy. To wit: that dangerous goods — like, say, oil — not be left unattended and that rail equipment be properly secured.

The composition the oil in the wreck  — which came from North Dakota — is also the subject of an investigation. It may have contained “volatile chemicals.” Or it might have contained additives or been contaminated by residue from cars’ previous shipments. Like the hand brake issue, it’s all kind of awful to think about.

On the Luka Magnotta front, Mark Marek, the guy whose site, Best Gore, hosted the video in which Jun Lin was beheaded, was arrested and charged with one count of corrupting morals. He’s been on the lam for a bit, moving through Hong Kong and the Philippines, and he was arrested with $18,000 in cash. He’s out now on $7,500 bail.

Finally, a woman who went missing from Surrey, B.C., 52 years ago is alive and well in the Yukon. Thank you, Gawker, for the line about a “dramatic This Canadian Life episode.” ■