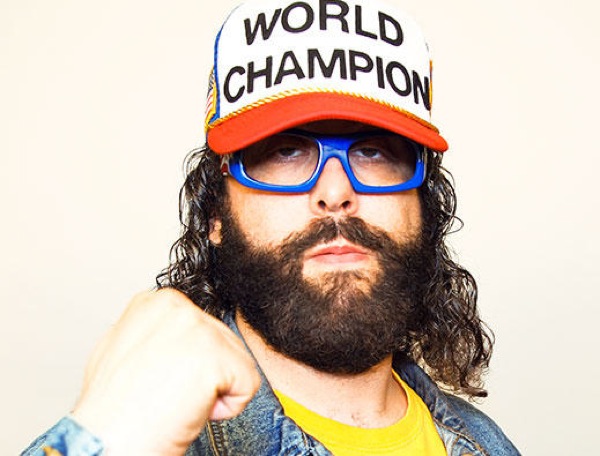 World Champion Judah Friedlander, who you might know from his role as the creatively hatted Frank Rossitano on 30 Rock, certainly has an extensive list of accomplishments to warrant his champ designation, but earlier this year cemented his status as a true king of the people when he helped save Coney Island’s Mermaid Parade from extinction.

In the wake of Hurricane Sandy, the parade’s future was up in the air, but the PSA he filmed concerning the plight of our finned friends undoubtedly helped in raising $117,000 on Kickstarter to keep the event afloat. For his efforts, he was bestowed the title of King Neptune at this year’s parade.

I spoke with the World Champion about saving the mermaids, the post-30 Rock life, his world-spanning leadership ambitions and Mumm’s.

Erik Leijon: Were you a big fan of the Mermaid Parade before helping it?
Judah Friedlander: I have friends who go every year. It’s a fun art parade where people make their own costumes, they put on dance numbers, all kinds of stuff. I always support the artists, and mermaids, who’ve been discriminated against for years. I always support the underdogs—it’s 2013, and mermaids still don’t have the right to vote.

EL: What are you up to post-30 Rock?
JF: Stand-up has always been my main thing. For the past seven years, I’ve had a very busy schedule doing 30 Rock in New York, so I haven’t been able to travel as much with my stand-up. So I’m doing more travelling these days, and I’ve done little TV things since, but my two main projects these days are a stand-up album and stand-up movie.

EL: Do you want to do more movie roles that involve changing your appearance, like when you played Toby Radloff in American Splendor?
JF: After the next two stand-up projects, I want to make my own movies, which will be independent, crazy, comedy exploitation movies. Then I want to get back into interesting roles.

EL: When you do stand-up, you talk a lot about running for president of the United States. When you travel, do you adjust those jokes depending on what country you’re in?
JF: You know, my title is World Champion, it’s not American Champion. Yes, I am American, but I’m the greatest athlete in the world, so sometimes when I’m in other countries I offer to maybe enter their elections as well. So yeah, I might run for President of Canada, if the Canadian people want it.

EL: You also said as President of the United States, you’d force Canadians to pay all of America’s taxes.
JF:Yeah, but you haven’t seen my plan for Canadian taxes yet.

EL: Would Americans pay our taxes?
JF: Maybe, and guess what—there are a lot more Americans, so guess who’s getting a surplus. You see, dude, it’s all strategy.

EL: Do other comedians brag a lot?
JF: I think more are starting to. The thing is, though, the World Champion stuff wasn’t something that happened overnight. I used to do a lot of art as a kid, and even in high school I used to make my own T-shirts, some with cartoons on them, so I came up with an idea for a hat that said World Champion, but not of what. It started out more as a character bragging, but also it was good because I got to interact with the crowd. It draws people in; it’s like a mystery, so it worked on two levels. At the time, I was writing a lot of jokes about breaking all kinds of ridiculous world records, and as a kid I played tons of sports, so before I had the hat I had the jokes in that style. Then I noticed that comedians were always trying to bond with the audience by doing observational, relatable stuff, but I thought I’d take the opposite approach, since I really can’t relate to other people because my life is just so superior.

EL: Have you met other World Champions?
JF: I was hosting my own radio show for a while and I interviewed WWE world champion John Cena, and he actually admitted that I’m the real World Champion. I met CM Punk at the last Wrestlemania, and when he greeted me he said, “What’s up, champ?” I met World Champion boxers, like Sergio Martinez, from Argentina. I’ve met Jean Pascal, too. I didn’t meet him in Montreal, though—I met him in New York City.

EL: Do you have any mementos from the set of 30 Rock?
JF: I got two things I was allowed to take: In one episode there’s a TV movie starring Jenna Maroney called the Rural Juror. The same author wrote another novel called Urban Fervor, so I have a copy of the Urban Fervor book jacket. I also have the book jacket for Dealbreakers, which was Liz Lemon’s TV talk show. I might also have the Frank Rossitano nametag from the door of his office, but that’s it.

EL: Is Mumm’s a real champagne?
JF: Yeah, Mumm’s is real. I have an open bottle of it, but I don’t drink. The line about buying “a whole bunch of Mumm’s” was actually improvised. ■