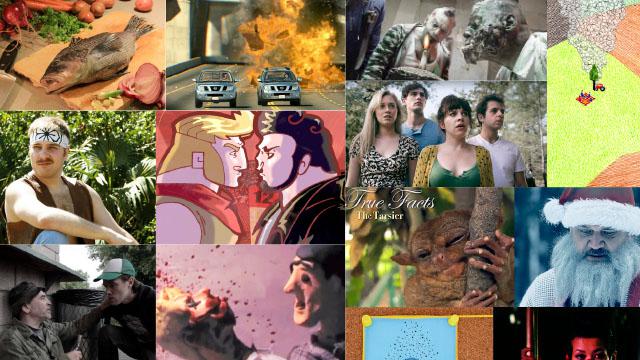 For the last decade, the Fantasia film festival has hosted zappin’ parties. What, you may ask, is a “zappin’ party”? Created by festival co-director Marc Lamothe (as DJ XL5), it’s essentially a love letter to genre and cult film. As Lamothe describes it, a zappin’ party is really a cinematic mixtape—an oeuvre that uses continuity, similar themes and the element of surprise to link shorts and screen goodies together.

“In 2004 at Fantasia, we received some short features that were extremely funny, that were really aimed at a certain type of humour that we liked a lot,” says Lamothe. “And at that point, we didn’t do short features before films—that evolved over the last few years. We had a program already established that’s called Small Gauge Trauma, which was more horror-oriented. So when we received these shorts, I thought it’d be nice to have a program of only fun shorts, animation, live action—but all oriented on funny, on savvy, irreverent.”

Lamothe, a fan of short features, found that some programs felt a bit disjointed, and wished for smoother transitions between the films. “With short feature programs, you go in and out of different universes in 90 minutes,” he explains. “I’ve been a DJ all my life—I wanted to put together a program that would resemble a mixtape. A mixtape starts strong and finishes strong. And it has this idea of having good continuity. And I’m a big fan of TV, too, and I’m a big fan of popular culture. So bringing all this together, I came up with the idea to create rhythm with these [short film] programs. I would put static excerpts between the shorts to make it resemble zapping”—that is, switching channels—“in front of your TV. The short program becomes something more than just shorts. It becomes a statement about popular culture, a statement about the kitsch values of the ‘70s and ‘80s in advertising and bad films.”

Since the festival’s first zapping party, Lamothe has used his strategy to create different types of parties for different genres and themes of visual media—and some have toured around the world. On Aug. 10, he’ll be entertaining music fans at Heavy MTL with his Spandex Zappin’ Party. “This one is a little bit different because it’s more music-oriented, but yes, I have about 40 old video clips, and it’s really covering the history of the heavy metal generation,” says Lamothe. “The idea is to really have fun with this and to show the kitsch factor—and yet it’s really melodic … it’s more than just music. It’s really about a showcase of the culture itself and the cinema itself.”

On Aug. 3, at Fantasia, he’ll be battling Orgasmo Sonore’s Cult Soundtracks Revisited with his pre-recorded Zombie Zappin’ Party. “I tell the story of zombies in the movies. I go from the first zombie movie in 1932, which was entitled White Zombie, and I go up to the new tendencies of the zombies. But I don’t touch TV. I only stick to film itself.” ■