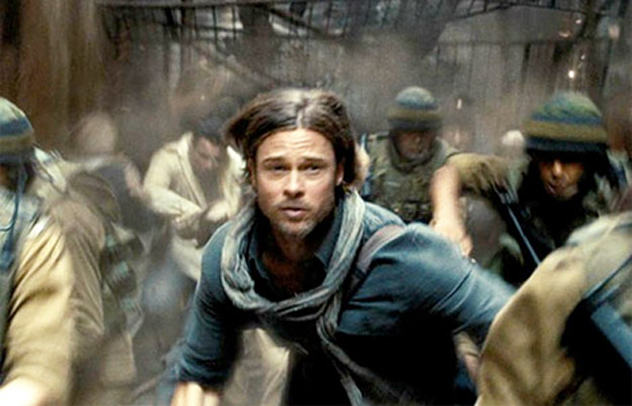 World War Z is a pretty unusual movie in a couple of ways. It marks one of Brad Pitt’s rare forays into big-budget action/summer/tentpole territory (something he hasn’t done since 2005’s Mr. and Mrs. Smith), and it’s also the first zombie blockbuster. Despite its $200-million budget, World War Z ‘s overall contributions to the genre are minimal. For all of its attempts to turn the typical zombie structure inside out and supersize it, World War Z is very much a product of its environment.

Gerry Lane (Pitt) is a retired UN worker who finds himself trapped amidst unknowable chaos, when a mysterious parasite infects most of Earth, leaving entire cities overrun by the flesh-hungry undead. Airlifted with his family onto a boat, Lane is forced to return to his old position with the threat of his family’s safety held over his head. Soon, he’s traipsing across the globe like a special forces Carmen Sandiego hoping to find “patient zero” and, ideally, a cure to the madness.

Although this is nominally a zombie movie, it’s different in a small but crucial way: instead of a motley crew of survivors fighting to keep zombies out of their living space, it’s about a single survivor moving throughout the world to fight the menace. Although it’s an interesting twist on a now-stale formula, it also cuts closer to your typical, overly familiar disaster movie structure. At its core, World War Z is not much more than Independence Day or The Day After Tomorrow with zombies in lieu of aliens or natural disasters.

The script is surprisingly sparse and action-heavy (with chronic over-plotter Damon Lindelof credited as one of three screenwriters, this is a near-miracle), but it basically boils down to throwing zombie scenarios into every exotic venue they can muster, including a plane, Jerusalem and a military base.

It’s fast, often thrilling (the lack of big names, save for Pitt, keeps the audience on its toes) and surprisingly compact, even at 116 minutes. But in attempting to appease a blockbuster audience, the filmmakers have also short-shifted the film. The PG-13 rating means that the gore that one so abundantly craves from Brad Pitt facing a zombie with a hatchet is all but absent, and the film’s incessant globetrotting leads to some ham-fisted (though arguably no less ham-fisted than George Romero’s) attempts at political commentary. The sheer scope of the film is impressive and leads to a few satisfying set pieces, but the action remains at its most compelling in enclosed spaces and intimate moments — something that has already been proven time and time again since Night of the Living Dead.

Pitt proves as adept as we remember him at grunting and jumping around, but there’s precious little in the role that utilizes his wit and charm. His performance is, like much of the movie that features it, solidly utilitarian but ultimately rote. Having all but abandoned the political content of Max Brooks’s original novel (a few elements remain, but the film overall is a very loose adaptation), it’s a far cry from Forster’s original claim of it being the zombie movie’s All the President’s Men. World War Z takes a lot of chances to end up being so familiar. And while its simplicity of purpose and generally competent filmmaking make it a cut above the usual blockbuster, it’s still just that: a big, loud summer movie. ■