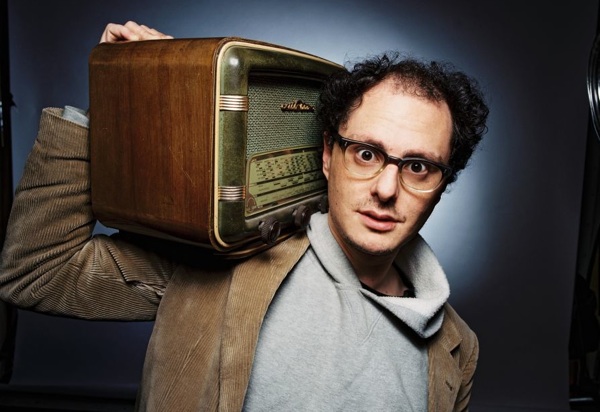 Within two minutes of talking to hip hop-klezmer polymath Josh “Socalled” Dolgin, he exclaims, “Delicious!” Dolgin oozes so much charisma, talent, and sheer menschlichkeit, that my mother would tell me to dress sluttier if she knew I was meeting him.

Dolgin is working with the Segal Centre and the Dora Wasserman Yiddish Theatre to bring forward Tales From Odessa, a musical based on the stories of early 20th century Russian writer Isaak Babel. The opus traces the rise of gangster Benya “The King” Krik in the rough Odessa neighborhood of Moldavanka. Dolgin talked about the inspiration and process of his latest piece.

Rachel Levine: What drew you to Isaak Babel’s Odessa Tales in the first place?

Josh Dolgin: I happened upon Babel’s Red Cavalry Stories in a pile of books at the Strand bookstore in NYC. I had no idea what they were about. They’re the diary entries of this weird Soviet writer in the Red Army, full of amazing poetry and crazy stories. He’s a Jewish guy trying not to be Jewish in the army. But, Babel is most famous for these Jewish gangster stories.

I’ve always loved gangster stories. They’re a rich genre and a great metaphor for power and systems of government and society. When I found these stories about a uniquely Jewish gangster, I asked myself: Why is he different from Michael Corleone? What is Eastern European Jewish about this guy? The stories are dirty, violent, hilarious, dark, and fun — everything that a good story should be. The gangsters do violent things — they have guns and kill people. There’s extortion and stealing and muscle. Benya Krik is a bit of a Robin Hood, stealing from the rich and giving to his community.

RL: How does the production reflect your particular musical sensibilities and interests?

JD: My method for making music is hip hop. I was never a composer before and didn’t know I could do it. I trained for 20 years making beats, making things make sense by putting them together. I’d start with things that didn’t match and put them together in all little bits until they made sense. For the show, I made tea and sat at the piano for three days and came up with little ideas: a chord change, a melody, a harmony. When something was worth remembering, I’d record it onto my laptop. And then, three days later, I had this playlist of 100 little things. I went and hung out with the little thingies for days and weeks and started to slap the pieces together. I put them together and built songs. So there is some hip hop, the method is hip hop, even though it sounds like Broadway or a village band.

Tales from Odessa combines a bunch of my interests. I am totally into Yiddish culture as a study and Yiddish klezmer music. I love Jewish gagsters and literature and puppets and putting on a show. The show has a cast of 40. This brings it all together.

JD: I make fuzzy puppets and used them in my last musical Seasons. In Tales from Odessa, I was going to have puppets tell the stories. But then I thought about how the stories are about fire and shadows and good and evil and dark and light. I thought puppets were cool, but shadow puppets … I know this amazing genius puppet lady, Clea Minaker. She’s a rockstar of puppeteering. She designed all these shadow puppets and they are in the background telling the story. It’s awesome. It’s amazing and is integrated with the actors.

RL: Any thoughts on having your work become a production?

JD: So once I created the thing, I got this writer, Derek Goldman in Washington, to make the book for me. It was translated into Yiddish by Miriam Hofman then back into English and French. And then I have this team of designers and choreographers. What I mean to say is that yes, I wrote the music and lyrics. It’s a book, papers, words, notes, a recipe book for a play. That’s cool. I’m new to the idea that you don’t have to make the sauce, you just make the recipe. And now there’s a huge team of people turning it into a show, with Audrey Finkelstein at the head. These people are on the ground making the damn thing. They are in the trenches every day at rehearsal. I went to rehearsal for the first time yesterday and saw it happening. I’ve never heard it or seen it before, and I see the singers singing the music and it’s alive in the room with people moving and dancing and shadow puppets. What an honour!

What’s also cool about this project is that I’m seeing how little people know about Isaak Babel, who is a great master. I’ve unearthed a lesser-known master and am interested in sharing him with people. If this project has this effect, that’s quite something.

Tales from Odessa runs June 16—July 7 at the Segal Centre (2170 Côte Ste-Catherine), $24. Follow Dolgin’s exploits on his own trip to Odessa on his blog.