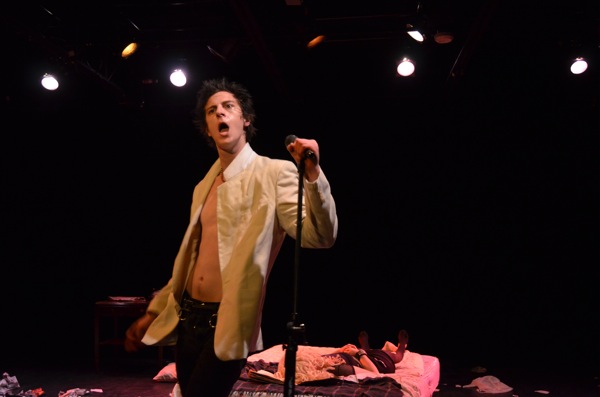 If you get off on Cockney accents, insult comedy and being a voyeur into the pathetic lives of suicidal junkies, Vicious Circles is the fix you need to scratch that itch.

Fittingly, the play is at Mainline Theatre (know your heroin lingo, kids), where the stage is strewn with old pizza boxes, beer cans and scraps of newspaper (including Cult MTL — nice!), decorous detritus of the room at the Chelsea Hotel where Sid Vicious and his girlfriend Nancy Spungen lived until her mysterious murder in 1978. (He died of an overdose four months later.) Sid’s former bandmate Johnny Rotten and sleazy Sex Pistols manager Malcolm McLaren fill the room with douchebag wisdom and insults lobbed in every direction as they sound off on the band’s implosion and Sid and Nancy’s mutually destructive relationship.

This is, of course, one of rock ’n’ roll history’s most iconic love stories, and as depraved and depressing as it is, it’s enjoyable on a certain level. Serious Sex Pistols followers will appreciate the punk rock history lesson and the love/hate dynamic between the four characters, not to mention the soundtrack.

Moreover, as a big fan of Alex Cox’s 1987 film Sid & Nancy, getting into this play was as easy as slipping into weathered leather. Like parts of the movie, the action in Vicious Circles plays out in a semi-dream state meant to mirror Sid’s drunk, junk-addled mind; the fourth wall is busted on numerous occasions, and time shifts to and fro as Nancy is alternately alive, dying or dead. Johnny at one point makes reference to Sid being 30-years dead — there’s some logic in him being the all-seeing eye, given that Johnny’s the only person portrayed here who’s still standing. He was even in the news today.

As Johnny, Shane Adamczak nearly stole the show, but all the actors (Patrick Rogers, Kathleen Aubert and Charles Mayer) have to be commended for bringing their characters to life so convincingly, even during the intermission, as they kept up the act in the lobby: Nancy yelled at Sid about scoring smack after he returned from an obligatory pizza run, Johnny chastised everyone in sight, including patrons, and Malcolm solicited us with bogus merch. Audience interaction during the play proper was minimal, but expect to be asked for a light, have a beer bottle lodged between your legs (uh, maybe that was the actor’s girlfriend?) and, if you’re sitting up front, have a bit of a beer shower. Johnny may also sit next to you for a while, and offer you swigs of “vodka” from a flask.

A Sex Pistols/Sid and Nancy newb might feel like these portrayals are cartoonish caricatures, and they are, as they were in the film — actually, the delivery was SO similar, I felt like I was watching Sid & Nancy outtakes. But as with Bill Murray and Johnny Depp’s nearly identical depictions of Hunter S. Thompson, that similarity lies in the fact that this is a true story about well-documented people. Everything from their attire to their accents to their hugely divergent points of view feel authentic, despite the obviously fictional dialogue and the unresolved nature of Nancy’s death. But ultimately it’s not reality, it’s entertaining voyeurism, and I’d rather spend another 90 minutes with this gang of miscreant degenerates than watch the parade of wretched hoarders and terrible parents on TV. ■