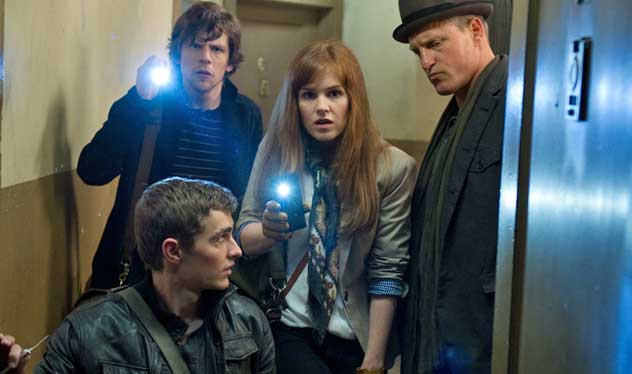 I wasn’t expecting much when I sat down to watch Now You See Me. I figured typical crime/thriller with the addition of, well, magic. Seeing as magic still makes my mind dive back to David Copperfield — frilly shirts and fluffy hair vs. a more modern magician like say, a tattooed and chiseled David Blaine — I couldn’t help but scoff a bit and feel smug about how awful I knew this film would be. But then I noticed the cast, which forced me to stop feeling so bloody pleased with myself. How can something so awful include Michael Caine? Not to mention, Morgan Freeman, Jesse Eisenberg and Mélanie Laurent — who we likely all adore since Inglourious Basterds.

Now You See Me isn’t awful. Actually, throughout the vast majority of the film I truly enjoyed myself, chuckling at the many jokes and being entertained by the magic. I did however wonder if this was the product of people missing the Harry Potter films and needing some supernatural hijinks in their lives.

The plot follows four of the best illusionists in the world, “The Four Horsemen,” J. Daniels Atlas (Jesse Eisenberg), Merrit McKinney (Woody Harrelson), Henley Reeves (Isla Fisher) and Jack Wilder (Dave Franco), as they execute heists during performances, showering their loot onto audiences. FBI agent Dylan Rhodes (Mark Ruffalo) is put on the case to stop them before they perform another act and successfully steal more money. Alma Dray (Mélanie Laurent) is also assigned to the case via Interpol and of course, reluctantly (insert most obvious potential romance here), they start to work together.

Rhodes and Dray lose the illusionists after their first magic act in Las Vegas, even though they had them in custody. They follow them to the second act in New Orleans, where again, they slip through their fingers. This all leads up to the third act in New York City — the appropriate climax of the film. It’s here where I feel like things kind of fall apart. I’ll not give anything away, but there’s a twist. During the entire film we’re trying to figure out who the illusionists are working for — how they handle the reveal caused by this “Aha!” moment, is a big ol’ pile of cheddar. This film made magic look kind of cool, as it does every few years when we get another Criss Angel. But the ending is not half as strong as the thrilling action, so it’s slightly disappointing.

Now You See Me serves its purpose. It’s the first in the new magic-action film genre.  (With special effects provided by local studios Rodeo and Modus FX I might add.) It won’t change the world but it’s entertaining and provides you with one hell of a car chase. ■

Now You See Me is in theaters now