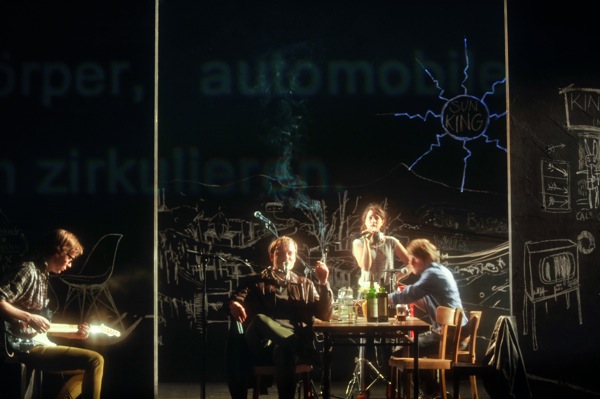 An Enemy of the People. Photo by Arno Declair.

The Festival TransAmériques brings the best reviewed and critically acclaimed theatre productions from around the world to Montreal. It provides a tasting menu of theatre, dance and performance art that’s been on fire in New York, London, Paris and beyond, as well as a curated selection of local productions. Each show runs only a scant two to four days over the festival’s two and a half weeks, making it touch for even the most committed theatre goer to take it all in. Here’s what you might have missed.

Thomas Ostermeier’s An Enemy of the People (May 22-24)

Believe the hype. Berlin-based director Thomas Ostermeier is among the most feted directors on stage today, so it comes as little surprise that his adaptation of Norwegian playwright Henrik Ibsen’s An Enemy of the People could cut through the cynicism of even the most jaded reviewer.

The play follows Dr. Thomas Stockmann (Thomas Bading), the medical advisor to a sleepy town’s newly developed bathhouse, opened by his brother, the town’s mayor. Stockmann finds contamination in the baths’ water source, a design flaw requiring millions of dollars to correct. He expects to be lauded as a hero but is surprised to find himself first ignored, then castigated and shunned by the town’s leaders and citizens.

The play is staged on a cheekily decorated double-layer blackboard set, which the actors change over the course of the play, at one point whitewashing it, later setting it ablaze with paintbombs. Each revision reflects the Stockmanns’ changing social status, their physical surroundings evolving alongside local public opinion. Furthermore, given that the play was performed in German with English and French surtitles, its simplicity helped to focus audience attention where it belonged: on the piece’s absolutely stellar cast.

The climax is a scene where Stockmann addresses a town hall meeting about the contamination, one that Ibsen famously used to frame the doctor as his mouthpiece in a lengthy monologue in which he gets into the big questions: what is the nature of democracy? Can representation ever truly work? Can we trust the masses to rule themselves? What is the nature of guilt and responsibility in a society?

This production really shines here, as they turned the houselights on full and handed out mics to audience members, who offered their solutions to these problems, highlighting the timelessness and universality of these problems, as well as the difficulty of finding any kind of reasonable solution. This worked particularly well given the subject matter’s timeliness in Montreal — no stranger to asinine government corruption, and, as it turns out, to tainted water supplies, a fact the cast milked for maximum yucks whenever the dialogue seemed particularly a propos.

Ostermeier’s contemporized version jubilantly succeeds, escaping the contemporized classic risk of anachronism. I’ve long had a soft spot for this seldom-produced play, which as Ostermeier so eloquently demonstrates finds application in any era. (ER)

Robyn Orlin, Beauty remained for just a moment then returned gently to her starting position (May 23-24)

Well, that was a dance show first — now I can say I’ve thrown an empty bottle at dancers on stage and engaged in a group gargle.

This week, South African choreographer Robyn Orlin, who’s known for her humour and being a shit disturber of sorts, shared her Beauty remained for just a moment then returned gently to her starting position at the Festival TransAmériques. Through the boisterous dance theatre piece, which uses video projections and audience interaction antics, Orlin poses the question, “What is beauty?”

For the sensorial group work, Orlin worked with Johannesburg-based dance group Moving Into Dance Mophatong, which was founded during apartheid as a way to encourage meetings through movement. Through their creative process, they discovered that beauty lies in the everyday in Jo-berg. Donning getups like a styrofoam cup dress, a water bottle mini skirt, a plastic bag gown, and dancing with air filled black percussive garbage bags, the seven dancers took the audience on a voyage from sun up to sun down.

The interactive performance had the audience in stitches several times, as they were making crunching noises with their empties, and when Orlin touches on the theme of exploitation. A character wanders through the audience, stopping at random men and literally begging for the shirts off their backs. She transforms them into a makeshift skirt, and then turns around to resell them for a tidy profit. Although entertaining, my only wish there had been more dance, which was fleeting. (MC)

There’s something curiously cerebral about French choreographer Xavier Le Roy, and I like it. Although complex, his propositions are clear and he runs with it, which is what I witnessed a decade ago after seeing him perform his intriguing solo Self-Unfinished at the now defunct FIND.

The lanky Le Roy, dressed in a casual bright red shirt, jeans and grey sneakers, walked on stage and stopped, with his back towards us. The melancholy notes of the solo bassoon that opens Igor Stravinsky’s avant-garde work seemed like it was entering directly into my left ear. Under the seats, Le Roy had positioned multiple speakers throughout the theatre space to emulate what it would be like to be sitting amongst a symphony orchestra performing the piece.

Eventually the expressive Le Roy turns around, continues to gesture in a conductorly-way, and just when your mind starts to wander, there’s an abrupt silence mid phrase, as he casually exits stage left as the music continues on. Le Roy transforms the way the spectator hears and sees music throughout the course of the piece.

With his animated expressions, that verge on goofy, some may claim this is just a cheap caricature of a pseudo-conductor in action, but Le Roy’s work possesses a complex simplicity that pays attention to detail.  You can see this in how he incorporated specific movements from the Rite of Spring choreographies of Vaslav Nijinsky, Pina Bausch and Martha Graham, then wove them into the piece. Or the fact that the program notes were handed out post-show.

Whether you loved it or hated it  — some walked out after a mere 15 minutes — booed or cheered at the end of the performance, Le Roy’s Le Sacre du Printemps was indeed memorable. (MC)

James Long and Marcus Youssef, Winners and Losers (May 27-29)

But, as the game persists, their jabs become increasingly personal. Each man’s background and values are rigorously judged. Things get ugly as their friendly rivalry transforms into a psychological vivisection. While the show appears to be an analysis of class, it also addresses the relationship between men. As they move from the rules of the bro code into less familiar emotional territory, their assessments begin to verge on sinister. The repartee between Long and Youssef is the real gem here. Their witty observations and natural, improvisational style produce zinger after zinger that would earn the most limpid twitter feed a river of followers. (RL) ■

The Festival TransAmériques runs to June 8 at various venues.