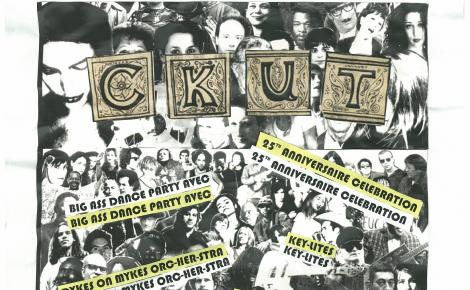 In a city where commercial radio has never done more than regurgitate the status quo, college radio has been an oasis. For good music, local news and community affairs programming, there are few destinations: the Université de Montréal’s brilliant CISM (89.3FM), Concordia’s super-cool CJLO (my alma mater, at 1690AM), longstanding French-language community station CIBL (101.5 FM) and, of course, (drum roll, fanfare) McGill’s CKUT (90.3 FM), which celebrates 25 years on the dial tonight.

“We don’t have a lot of competition,” states the station’s funding and outreach coordinator Caitlin Manicom. “CJLO is growing and its music programming is  getting better and better every year, and that’s really exciting and awesome to see. But CKUT has been holding it down for so long, since even before 1987; it’s been an important station for many people, people who’ve developed really strong relationships to certain shows. I don’t think there’s another station in Montreal that programs the way CKUT does.”

It’s all true. Samedi Midi, a show that predates CKUT’s move onto the FM dial, has long served as a gathering point for the local Haitian community, while Dykes on Mics has provided a forum for lesbian chat for over two decades, and Underground Sounds foisted Montreal music onto listeners’ radars well before our scene was cool outside city limits. Add to that the station’s dedication to co-presenting events, curating concert series like the excellent Total Eclipse. And with increasing visibility online, CKUT has become an international concern.

“We Funk has a huge following all across the world, especially in Scandinavia and other parts of Europe,” says Manicom. “Of course we remain really community-focused and have a lot of interest in promoting what’s going on in Montreal, but we do have large followings overseas, which is apparent during our funding drives.”

CKUT’s roots, of course, are in McGill, more specifically in the basement of the “Shatner” building, its original HQ before it moved to its current location on University. The relationship between the station and the university has been turbulent at times, but there’s more harmony these days, Manicom says, as CKUT strives to serve its student audience with initiatives like the on-campus concert series that provided a launching pad for internationally renowned acts like Braids and Grimes.

As sales manager and board member Louise Burns explains, the station’s history in pictures says a lot about the relationship between McGill and its station, and of the development of radio as a medium.

“Radio McGill existed before the licence, and through photos from yearbooks we see, initially, radio just being the technology of transmitting sound from one place to another. In the ’60s, everybody looks like they’re working for a newsroom, they look like they’re imitating professionals. In the ’70s, you can see that they’ve got their freak on and are probably playing entire albums. In the ’80s, when we got our licence, it was a college-ey university station, but being on the air, the station became very community-driven. Then there was an awareness that we had to serve both of our audiences; being tied to the university, we needed to serve an educational purpose for the students.”

As for Montreal’s radio dial, other university stations and the rise of local podcasts and Internet radio shows, Burns is proud of CKUT’s seniority and supremacy —that’s my word, not hers. Diplomacy reigns.

“We don’t do the competitive thing, we do the partnership thing,” she says. “We feel that if community-based programming is stronger, we’re stronger.” ■