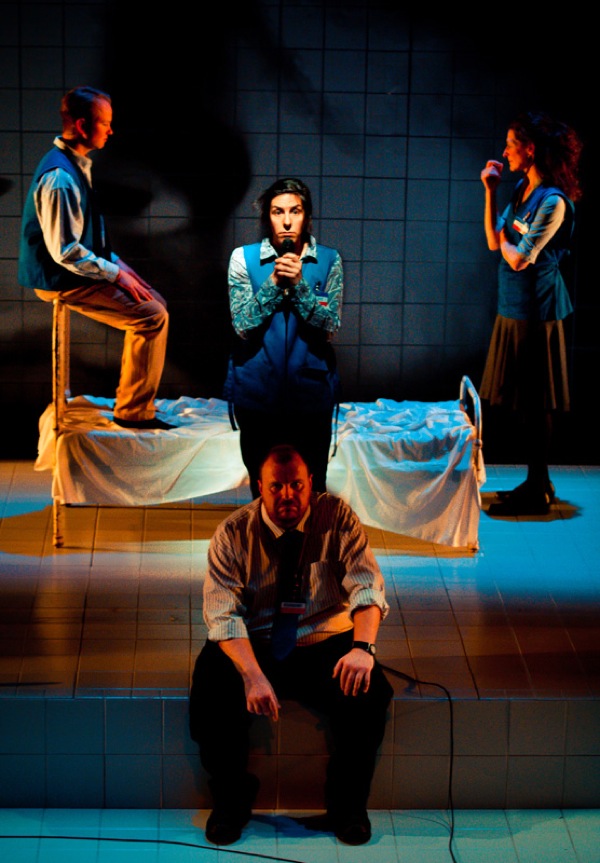 Candles are for Burning company in Bliss. Photo by Jeff Mann.

Bliss, the English-language translation of Olivier Choinière’s original Félicité, is a play about what you could call the Céline effect: the way a celebrity like Céline Dion — yes, our very own Céline! — is manifested, worshipped and continually re-created among the less-than-fabulous, less-then-visible levels of society. Through the deft versatility of the four cast members and brilliant script, three stories are narratively illustrated in past-perfect tense.

Bliss reveals and exploits the ways that our penchant for sensationalism, and our thirst for meaning and excitement, have the curious and disturbing effect of (almost seamlessly) suturing such disparate experiences — such as those of Céline Dion, disenfranchised Walmart employee Caro and incest victim Isabelle — into one shock-and-awe retelling. It’s a dynamic play-by-play that mimicked the manic taglines and exposé outbursts in the media oracles of celebrity culture, but also the truth-claims about the lives of saints, for example, and the quasi-forensic re-telling of heinous crimes.

The best (and worst) part of it is, it was very easy to picture everything they described: I did it without thinking, without imagination. It was actually a surprise to realize it.

Three of the actors paced, leaped, and scrambled over the clinical, ceramic-tiled stage that supported a pathetic Annie-style small brass bed (all watched over by a similarly-gridded close-up image of a woman’s face on the back wall). The fourth cast member inhabited the shadowy perimeter of the proceedings. Using a microphone, she seemed to be the interlocutor of truth (or as you might remember from Grade 8 English, the omniscient narrator).

The deceptive facility of this ally of reality, who we unconsciously align with, is revealed toward the end as she begins to inhabit the body of Isabelle, the victim of a hideous crime of incest and incarceration: she narrates the violent and hyper-surrealist decomposition of her body in such visceral (but oddly poetic) terms that we realize we feel it too, that we have helped create this and now must share in it.

The frequently-invoked motif of the mirror — it appears in all three stories — is a very clever rhetorical tool: as both a reflection and a reversal, the mirror helps to both reveal and exploit the dangerous proximity — and equal consumption and enjoyment — of seeming opposites, which is endemic to our media-driven culture. Expressions of emotion, such as tears, eyes squeezed shut, and open mouths, are often summoned also: is it joy or pain? is it singing or screaming?

The similarities between these lives are as weird as their juxtaposition: the bed, to which both Celine and Isabelle were respectively confined, imply vulnerability and sexual availability. Indeed, as our narrators recount in a froth of near-religious ecstasy, Céline is reported to have sweetly asked, “‘How do you want me?’ to the photographer, “as though it was her first time!” The holy luxury of Celine’s life is transposed onto the lonely, delusional days of Caro, or shifts without warning into the hellish experience of Isabelle. How closely celebrity culture is tied to death and the very ugliest corners of our society!

In the same vein, the production serves up bliss and despair, comedy and darkness in equal parts, in fact switching between them as fast as you can turn a mirror onto something.

Bliss is part indictment of our naïve depravity and the media that reflects and supports it, but also a reminder that the fantasy of a celebrity’s life can be the only thing that sustains an ostracized Walmart employee or a horrendously violated child such as Isabelle.

The sly suggestion that the secularization of Quebec society in the Quiet Revolution did not squelch the yearning for a Madonna (no, not that one) will not be lost on audiences either. Indeed: Céline, however you want her. ■