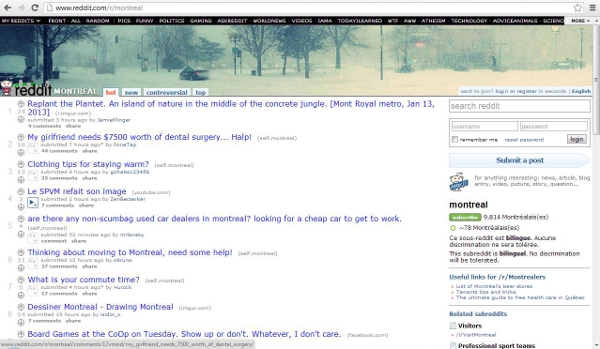 Reddit Montreal, as it appeared at 9:09 p.m. on Monday

Every now and then, we at Cult MTL head over to Reddit’s Montreal board with the noble goal of answering every question on the first page of the forum. Below are responses to the questions that appeared on the so-called front page of the Internet at 9:09 p.m. on Monday, Feb. 4.

My girlfriend needs $7500 worth of dental surgery… Halp!
Submitted by: FoneTap
Answer: Dentistry schools are your best bet. You’ll probably need to find a dental surgeon program. If putting your girlfriend’s piehole in the hands of a greenhorn begins to seem too risky, try Dr. Julia Pompura. She fixed up our wisdom teeth real nice.

Clothing tips for staying warm?
Submitted by: gohabs123456
Answer: As more than one person said, long johns. After spending a night at the Ice Hotel, I can’t emphasize their importance enough. The most practical piece of cold-weather clothing you’ll ever own. I bought mine at Schreter’s, where I hadn’t shopped since I got the suit I wore at my bar mitzvah, but you’ll definitely find some at, say, Simons. I’d also recommend a thermal shirt and a sturdy pair of boots. I prefer Timberlands and Nike ACGs, but, being 20, you probably don’t see your wardrobe as an ongoing salute to mid-’90s skateboarding and hip hop. Still, any Foot Locker or Winners location is a good bet, but if you want something more unique, try Off the Hook, at Ste-Catherine and Peel.

Also, ladies will notice and appreciate layering, the most practical and least smelly way to stay warm, rather than wearing a t-shirt under a parka from November through April.

are there any non-scumbag used car dealers in montreal? looking for a cheap car to get to work.
Submitted by: by mrlansky
Answer:  Considering many on the Cult MTL editorial board are without wheels (or licenses, for that matter), we can’t speak from personal experience. However, we have heard the Montreal Kijiji and Craigslist boards are scumbag magnets in the realm of used automobiles, so one Reddit user’s suggestion to look outside of Montreal isn’t a bad idea. Check out the Ottawa pages and see what turns up!

Thinking about moving to Montreal, need some help!
Submitted by: obruno
Answer:  First of all, let’s start with a few questions:

– How is your French?

– How little money are you comfortable surviving on?

What is your commute time?
Submitted by: Hurock
Answer:  I work from home, so my commute, from bed to desk, takes about 30 seconds. A detour through the bathroom can extend it significantly, though.

Another one of us walks 10 minutes to work at a café, which is better than the half-hour bus-and-metro commute to corporate hell.

Looking for a good Dermatologist in Lasalle – Lachine area.
Submitted by: anacondatmz
Answer:  Is Verdun close enough? These friendly-looking people might be able to help.

To any Pokemon people in Montreal.
Submitted by: JurassicParkerr
Answer:  We’re not Pokémon people (but we know enough to throw on that accent).

I’m fresh off the boat and an English speaker. Language issues aside, how exactly does one scare up casual work in Montreal?
Submitted by: kanzaman
Answer:  Well, it’s hardly anybody’s Plan A, but a lot of English speakers find work in the city’s plethora of call centres. It’s pretty easy to find work and start quickly without experience, and many are very flexible about shifts. Winter’s a slow time in restaurants and for tourism, but these jobs get more plentiful (and can be more rewarding, financially and for your soul) as the weather gets nicer and the tourism season kicks into gear.

Or you could work at a bar, or perhaps be a hustler/prostitute, but French might be needed for the latter (the language — there’s usually no kissing in sex work).

Driver’s Ed school recommendations?
Submitted by: i_ate_god
Answer:  It really is true: the new-ish SAAQ policies in place make it so that you can’t possibly earn your license in fewer than 13 months — unless, of course, you got a learner’s permit way back when you were a teen and then didn’t follow through on the learning-to-drive bit. First you have to attend theory classes for a month, then write your permit test. After that, you alternate between theory and driving lessons for the next however many months, then you go to the SAAQ and write a knowledge test. Then, after all that, you can do your driving exam. I started in August 2011 and got a license in October 2012 (first attempt, woo!) — and that only included 24 hours of theory and 15 hours of driving lessons. As for driving schools, they all charge the same price, so you’re probably not going to find a great deal. The folks at Montreal City Motor League are pretty swell, and their downtown location on Ste-Catherine, near Peel, is convenient.

Best Bar/Resto for Chicken Wings During Hockey
Submitted by: WHiteben
Answer: It seems the consensus is that McKibbins has the spiciest wings, but if you ever want to use your taste buds again, it may not be the wisest choice. Wings are becoming pretty commonplace in pubs and most drinking establishments with kitchens, so let’s shift away from the best wings to the best hockey-watching bars. McLean’s, on Peel, is fun because they have a number of big screens, decent beers on tap and a pretty relaxed crowd; plus, the dark wood furniture makes it feel kind of homey. The wings there are $14.99/lb. If you don’t care about ambiance or the company you keep, la Station des Sports, near Guy-Concordia, offers 10 wings for $7.95, but keep in mind that frat boys like to hang here. In a more easterly direction, Diablos BBQ, on St-Denis, has $6.99/lb. wings on Tuesdays, which is usually a game night. They also have the added bonus of having decently priced beers, insanely elaborate cocktails and an un-douchey clientele.

Where to buy NFL jersey’s in the city/downtown?
Submitted by: mtlguy11
Answer:  While there are no real football fans among Cult MTL’s editors, at least one of us used to buy copious amounts of oversize fitted hats, the brims of which he kept perfectly flat, at Pro Sports, on Ste-Catherine, near University. And though this editor, who shall remain nameless, on more than one occasion contemplated buying a jersey to match, he never did. Still, this is a pretty safe bet.

Anyone have a cheap server rack for sale? I can pickup.
Submitted by: ga31
Answer:  If we sold you ours, what would we use? Sorry, bro.

Cherche vêtements de Barbie usagés Montréal/ Looking for used Barbie Clothes in Montreal
Submitted by: Quenadian
Answer:  It’s been a while since we dressed our Malibu Barbie, but we’re betting you’ll have some difficulty finding vintage gear in stores. Your best bet is finding a household with a girl of around 12 who’s outgrowing her dolls (maybe put a flyer in your ‘hood?). Her parents would probably be more than welcome to get rid of some duds. Alternatively, Craigslist.

Or wait for garage/yard-sale season. If you can. Are you needing those Barbie clothes real bad?

We always thought Jem was way cooler than Barbie, anyway.

New friends / meet-ups in Montreal
Submitted by: disgruntleddave
Answer:  The Montreal Outdoors Adventure Club might be a bit, um, outdoorsy for you, but a friend of ours is a member, and she says it’s fun and that the members aren’t too creepy. Otherwise, browse meetup.com.

Tell me about local dog/animal shelters
Submitted by: wanttodonatetodogs
Answer:  A lot of people get down on the SPCA, but the fact of the matter is that they’re kind of the default animal-abandonment place in Montreal. They get a lot of animals — higher volume than smaller shelters, for sure, and more than just cats and dogs. That said, any decent shelter, particularly no-kill, would certainly make good use of your donations, so perhaps asking for a veterinary clinic’s recommendation is a good bet. Animal Health Clinic in NDG may be able to steer you in the right direction.

Even more people get down on Berger Blanc, which serves a large part of the city, like the entire north-east (north of Mile End, east of Plateau). They’ve been the subject of media exposés in recent years, and if you lose a pet in their territory, the SPCA will actually tell you not to believe a word they say to you by phone, and to stalk the place physically. Even better, get a torch-wielding mob out there.

Visiting Montreal next week- where are the good used bookstores?
Submitted by: vanillacrunch
Answer:  If you’re anywhere near the McGill Ghetto, we’d suggest the Word. It’s well stocked and carefully curated, and the employees, at least one of whom has been there for decades, know their way around the English literary canon.

Paragraphe is a good downtown alternative to the Chapters/Indigo mob, and if you’re in Mile End, Drawn & Quarterly is a great place, especially for graphic novels and such. Encore in NDG is a sweet used bookstore that also sells CDs, vinyl and DVDs. ■