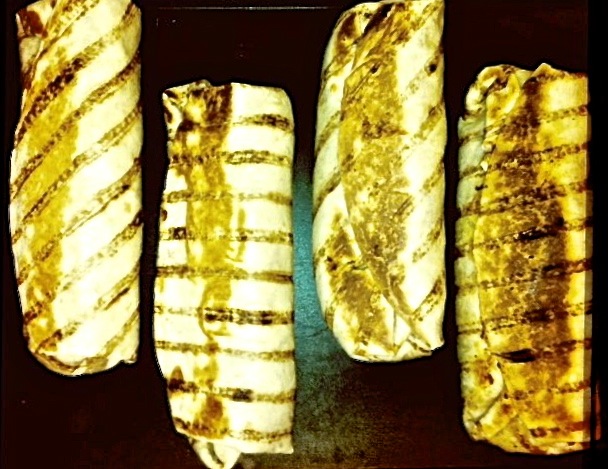 It’d be easy to assume anyone who starts a bike-only food delivery service in the first week of January has some sort of death wish, but winter biking is everyday life for TJ Stevenson, Sarah Charrouf and Taylor Freund, bike couriers and now chefs at Velo Burrito.

Based out of a St-Henri kitchen, this vegetarian/vegan burrito upstart began as randomly as it seems.

“TJ and I had been talking about doing this for a few years, and one day I just told him we were going to the grocery store and starting that weekend — it was that spontaneous,” Freund says.

Having toured the U.S. multiple times with various bands (including Barn Burner and Black Ships), Freund felt at home making burritos. So did Stevenson, who worked in the kitchen at Toronto’s Rancho Relaxo. 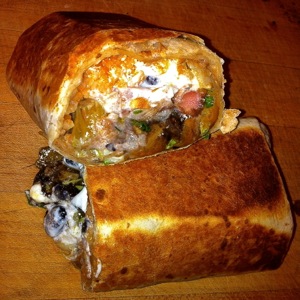 “Burritos are the perfect tour food, and from eating so many of them on the road, you get a good sense of what works and what doesn’t. We incorporated some of my favourite ingredients from different burrito restaurants across North America,” he says.

Velo Burrito distinguishes itself from other Montreal burrito contenders by offering homemade meat and dairy substitutes prepared by recent Vancouver transplant Charrouf — the former made of seitan, tempeh and jackfruit, the latter of cashews (for the record, they also offer real cheese and sour cream for dairy lovers).

“I don’t think we’ll ever cook with meat. Sarah is vegan, and TJ and I are vegetarians. One of my favourite burrito places ever is Budgie’s in Vancouver, which is vegetarian and still very successful and delicious,” Freund says.

For the time being, though, you’re going to have to save your burrito cravings for the weekend — Velo Burrito’s tiny operation is only open Friday and Saturday nights. They also only deliver between 6–11 p.m. within the Southwest/lower NDG zone, with one Plateau-bound run per night. However, they also offer to make dep runs on their way over for an extra $2 delivery charge, so the trade-off is pretty sweet.

“On really cold days, I sometimes dread riding my bike during the day, but I actually look forward to doing deliveries at night. The fact that so many people are ordering is blowing my mind,” Freund says. ■