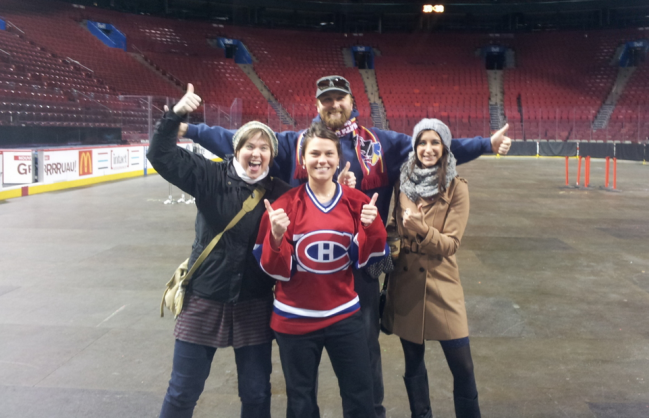 This weekend, for the second year in a row, the Impossible Montreal scavenger hunt will have contestants running around the city trying to complete a set of tasks. Last year, contestants had to do complete challenges like talking their way onto centre ice at the Bell Centre, re-enacting their favourite Rick Mercer rant and posting it on YouTube and eating as many steamies as possible.

Hunt organizer Vinny François is set to unleash a whole new list of tasks upon more than 50 contestants this weekend (this year will see eight teams competing, up from three last year), and he says he’s been prepping a long time for this weekend.

“I keep notes all year long. Looking for bits of trivia about the city, about puzzles, about fun ideas in other cities and then modifying them for Montreal. It’s a tricky balance to strike for the list. Also, there needs to be an appeal to all different types of people,” he says.

The social aspect of the hunt is part of the appeal, too. “It’s incredible to see your friends reveal amazing talents you might never have known they had. The creativity and playfulness on display last year was so inspiring.”

Although the name of the hunt is Impossible Montreal, François assures contestants that tasks are not beyond completion. “I’m careful to make things seem doable. If it was just a list of actually impossible tasks, that would be the most boring adventure ever.”

Is there such a thing as an ideal contestant? François doesn’t think so. “There is no single ideal player, really — it’s a good collective that is needed to win. You need such a diverse set of skills to do well that a bigger group will definitely have an advantage.”

He also claims that he will reward those who put the extra work in. “I do give out discretionary bonus points for teams going beyond the call of duty. If I ask for a picture of the cross on the mountain, and you take a great picture of [it], I will definitely be up to granting bonus points.”

François adds that this contest’s tasks are tailor-made for the city. “The whole point of the scav, as we like to call it, is to add a sense of adventure to everyday life, and to especially highlight all of the things I love about Montreal. It is very city-specific.”

He also notes that seeing interactions among team members makes it worth it. “There’s something magical about a group of friends running around town, on an adventure together. I love just sitting back and watching it go. I never can predict what the teams will come up with.” ■