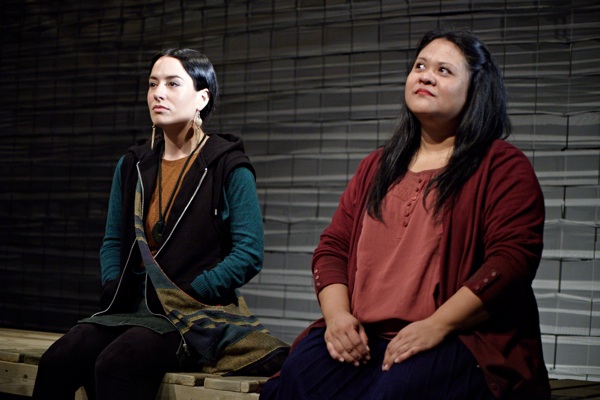 Where the Blood Mixes:Alarey Alsip and Emilee Veluz
Photo by Mateo Hernandez

Teesri Duniya Theatre continues its more than 30 years of producing progressive, socially relevant theatre with their latest production of Where the Blood Mixes, directed by Lib Spry and playing at the Centre Culturel Calixa-Lavallée until Sept. 30.

Dealing with the legacy of the Native residential school system and set in the Lytton First Nation of British Columbia, the play follows three residential school survivors, Floyd (Jeremy Proulx), Mooch (Charles Bender) and June (Emilee Veluz). The routine of their lives is interrupted and they are forced to face the trauma of their past when Christine (played by Alarey Alsip) returns to the reserve after 20 years, looking for her father and answers as to why she was taken away by Social Services as a child.

The writing is fantastic, as evidenced by the multiple accolades the script has garnered, including the 2009 Governor General’s Award. Weaving together elements from Nlaka’pamux mythology, daily life at the bar and the shadows cast across generations by colonialism, the script is both punchy and poetic.

Playwright Kevin Loring admits his script unflinchingly “goes to some really dark places,” but he adds that “it’s also a really funny play… it has a way of bringing audiences in.” Humour is deftly used throughout to give both the characters and the audience the strength to grapple with the massive historical injustice committed against children and families across Canada.

Jeremy Proulx’s subtle and powerful performance as Christine’s father Floyd provides the engine of the play. His daily, mundane, relentless pain is palpable, as is his immense will to maintain control and survive. He copes by drinking at the bar with Mooch and trying to find some peace fishing in the river.

The crux of the play is this — that survival takes place in the everyday. The physical building of the residential school, as pointed out in one scene, looms large over the community as does its vast impact on survivors. It is a play about survival, and celebrating the strength of survivors.

The play keeps its universal appeal, according to Loring, because the story revolves around a father and a daughter. It has served as a point of entry for non-Indigenous Canadians to begin to honestly listen to the issues that Indigenous communities have been dealing with for decades.

When people go to the theatre, he says, “People pay to sit in a room together… When we laugh, when we cry, we are all breathing together,” and there lies theatre’s great potential to address historical injustices. “There is a universal humanness to it that surpasses politics and ideology. We are all in a room together. That’s a good starting point.” ■