Last Saturday, a massive fire destroyed a lobster plant in southern Nova Scotia. The criminal act was the latest in escalating terrorism against Mi’kmaq fishermen who are doing nothing more than exercising their legal treaty rights, while being treated like lawless, entitled troublemakers in the process.

A few days earlier, hundreds of people stormed two lobster facilities, uttering threats, burning a van and destroying lawfully harvested lobster. A Mi’kmaq fisherman, and others sheltering in a building, were told that they would be “burned out” unless they surrendered their catch. Despite calling 911 multiple times, onlookers said it took the RCMP two entire hours to show up.

Tensions escalated this past September, when the Sipekne’katik First Nation launched its own moderate living fishery outside of the regular lobster fishing season. I can’t repeat this enough: they have the legal right to do so. The Mi’kmaq’s Constitutional Treaty right to their commercial fishery, dating back to the 1752, has been upheld by the Supreme Court of Canada twice — most recently in 1999 with the Marshall Decision. That landmark ruling clearly affirmed that Mi’kmaq can earn a moderate living from hunting and fishing.

The federal government retains the authority to regulate the fishery for conservation purposes. However, and despite assertions by non-Indigenous fishermen, scientists do not believe this current dispute is in any way about conservation. “The Mi’kmaw have set out about 500 lobster traps. By comparison, Canada’s commercial fishing vessels (primarily Halifax-headquartered Clearwater company, North America’s largest shellfish producer) collectively monitor more than 900,000 traps in the Atlantic Ocean.” It’s absurd to even defend the environmental protection argument when faced with those sharply contrasting numbers.

This isn’t about conservation. This is clear anti-Indigenous racism, white supremacy, a real lack of treaty education in this country, as well as ongoing colonial practices that inevitably always prioritize the need of the settler majority to establish control.

RCMP doing what RCMP do

The public and official reaction to these criminal attacks on Indigenous communities poignantly demonstrates how systemic racism is still very much a brutal reality in Canada.

Reached early Saturday morning, after the massive fire in the lobster plant, Nova Scotia RCMP said they were “unaware of the incident.” Statements like these in response to criminal violence and targeted intimidation always serve to remind us that the RCMP is essentially an organization created to enforce compliance with the Indian Act.

It gets worse. When the spokesperson for the Nova Scotia RCMP was asked to later issue an official statement, this was the best he could come up with: “We don’t see this as a police issue,” he said, “but we understand both sides.”

Do vandalism, arson, uttering threats and a man in critical condition only qualify as a “police issue” when the victims are white? Does mob terrorism get a pass when the perpetrators look like the RCMP officers?

It’s frustrating to watch the RCMP standing by, pretending to be an objective bystander, indifferently sitting on the fence, waiting for cooler heads to prevail, when historically most of their actions against Indigenous communities have been highly militarized and unnecessarily aggressive. If anything, their muted response is perfectly representative of this country’s unequal Indigenous-settler relations.

RCMP officers had no qualms about moving in to arrest Indigenous people defending Wet’suwet’en territory against a natural gas pipeline in northern B.C. in 2019. They were fine with arresting Indigenous protesters last week in Kamloops, B.C. who were fighting against the Trans Mountain pipeline expansion on their territory. How many RCMP officers were dispatched when the Mi’kmaq people in Elsipogtog First Nation outside Rexton, N.B. stood against fracking in 2013?

Did they “understand both sides” when they practically acted as security guards for Coastal GasLink and raided Indigenous camps earlier this year with sniper rifles? Why is the safety of Indigenous people not — at the very least — equally important as a fracking company’s profits and viability? How is the RCMP capable of walking into unceded territory to enforce a court order, arresting land defenders blocking pipeline construction work — a decision that triggered nationwide railway blockades this past February — but they are incapable or unwilling to enforce the law when deliberate criminal activity targets Mik’maq people? Is this not the very definition of systemic bias?

Who controls the public narrative?

Time and time again, I am reminded of Shakil Choudhury’s excellent book Deep Diversity. “Systemic discrimination is not always malicious. All it takes is for the dominant group to display the unconscious tendency to favour those who look like them, which happens all the time. Prejudice and favouritism create blind spots.”

These blind spots are everywhere, and you can easily spot them in political statements, in police briefings and in the (conscious or unconscious) biased language and story angles often used by mainstream media and opinion pundits to report on the events, where Indigenous are portrayed as freeloading, problematic, uncooperative troublemakers who refuse to see “reason,” and the white folks just defending their interests.

What is currently unfolding in Nova Scotia is targeted terrorism meant to intimidate, and it should be treated as terrorism by our police force. But it isn’t, because the victims aren’t the white majority. And similar stories are playing out across the country in slightly different ways.

What is happening to the Mi’kmaq people is happening right now in Algonquin territory in Quebec, where non-Indigenous hunters have been shooting their community signs and leaving moose body parts around their camp as Algonquins are trying to protect declining moose populations due to trophy hunting. The Algonquins have repeatedly asked Quebec to impose a moratorium on issuing moose hunting licences, to no avail. Contrast that with a recent La Presse article that only interviewed trophy hunters, talking about how “terrified” they were for their safety. The reason Algonquins had erected blockades in their territory only appears in the article’s final paragraph, almost as an afterthought.

In the meantime, the RCMP and the SQ continue to demonstrate their bias when they deal with Indigenous communities. In the past five years, 200 Indigenous people have filed formal complaints of police misconduct in Quebec, according to human rights lawyer and law professor Fannie Lafontaine. Her report, which confirms systemic racism in the Quebec police force, also found the province’s police watchdog “unacceptably opaque” in probing abuse against Indigenous people.

Anti-Indigenous racism and colonial violence is very much a reality in this country. When one considers that Canada is a country founded on the forced assimilation and eradication of Indigenous populations, why is it so surprising that it continues to trickle down into every aspect of our system, including healthcare, youth protection and policing?

Senator Murray Sinclair, a retired judge and former Chair of the Truth and Reconciliation Commission of Canada, officially called on Prime Minister Justin Trudeau to uphold the Rule of Law and asked the RCMP to protect the rights of the Mi’kmaq people. He has called the federal response to ongoing tensions over Indigenous fishing rights “an abject failure.”

Indigenous communities continue to face ongoing intimidation tactics while exercising their treaty rights. In the meantime, the same politicians who were issuing ultimatums and hardline statements about the rule of law when Wet’suwet’en blockades went up earlier this year are nowhere to be found now.

What this ongoing tension clearly demonstrates is that more treaty education is desperately needed. Historian and Indigenous Studies professor at the University of Manitoba Sean Carleton went on a Twitter tirade Monday, outlining that need. “The lack of meaningful treaty education and historical understanding about Indigenous-settler relations only further fuels settler ignorance and anti-Indigenous racism.”

He’s right. Without ensuring that most Canadians understand treaty rights and what Indigenous communities are legally owed, this vicious cycle of conflict, violence and recrimination is doomed to repeat itself. Without education and true understanding, there is no way this country can ever move forward with true reconciliation. ■ 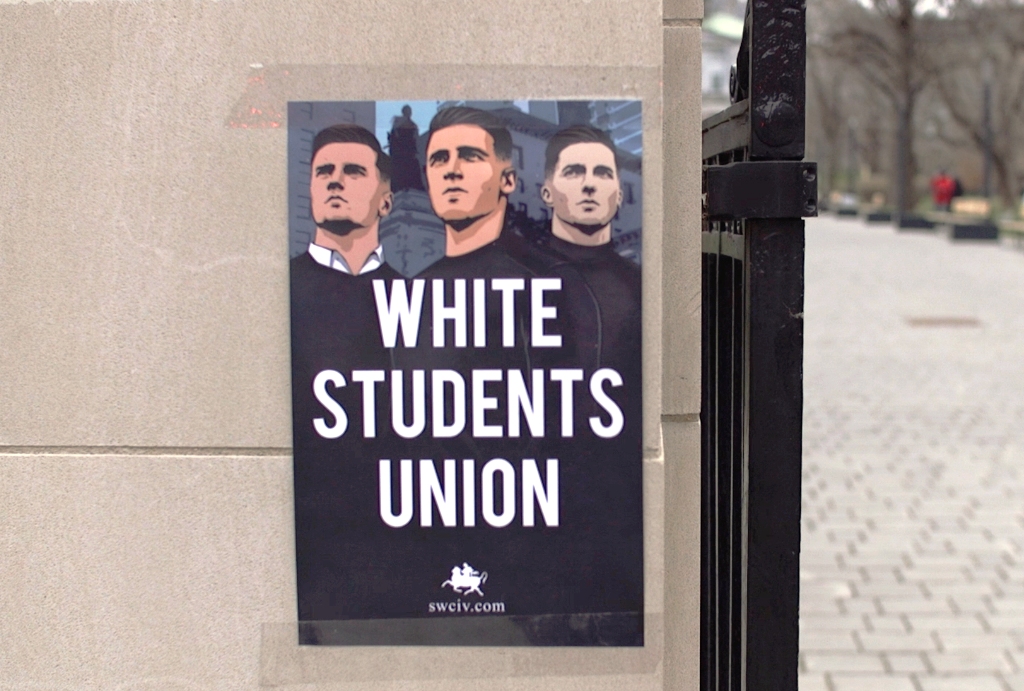 White Students Union recruitment posters have been put up on campus.