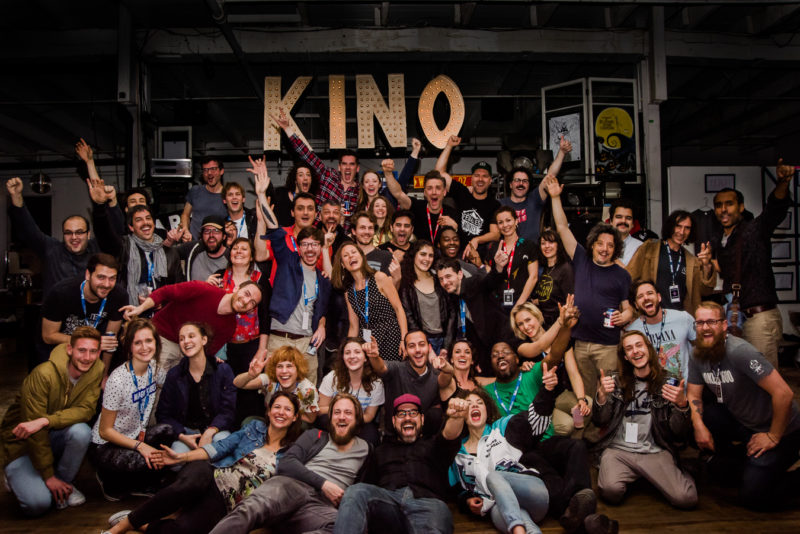 The Montreal-based short film collective Kino is turning 20 this year and throwing a series of events to celebrate! Though its activities usually center around the three-day “spontaneous production” festival Kino Kabaret as well as monthly screenings, the coop/production company/creative space/film community has more than a few unique activities on offer. I sat down with Jarrett Mann, Kino’s artistic director, to learn a little more about what the 20-year festivities had in store.

“I’ve been an employee of Kino, the NPO, since November 2017, but I’ve known Kino since the very beginning,” says Mann. “It was a huge influence on me. I co-founded the SPASM festival in 2002 and it was in part because of the popularity of Kino in 2000 or thereabouts. There was a real buzz; I could see that people were really into short films. As cinema became more democratized as an artform, I always followed Kino. I’ve always been close to it, and so it’s been a huge part of my life.”

I have to admit that, having lived in Montreal for 15 years and having been part of the film community in some aspect for most of it, I have shamefully never been to a Kino event. And, truthfully, I needed Mann to lay it out for me a little bit.

“There are quite a few aspects to Kino, in fact,” he says. “There’s Kino Montreal, where we organize a bunch of events and work towards the production of short films. Then you have the Kino movement, which is worldwide and exists all on its own. They’re not connected to us — there are some cells that we have more contact with, others we’ve never spoken to at all. New cells are started every week; others disappear as well. As the artistic director, one of my main tasks is the Kino Kabaret once a year. That necessitates many months of work — it’s in May and last year there were over 300 people signed up. We pick about 30 directors who then have to direct a short film in three days. There are three blocks of 10 films each, which in itself is huge. You have to round up all the directors, the cast, the crew — it’s a huge machine. We’re there to give them the equipment they need: cameras, lighting and so on. We have partnerships with DroneStudio, with Le grand costumier… Sometimes, the filmmaker is chosen without us knowing what they’re going to make. In other situations — like the SPASM cabaret or the films we’re going to be showing for our 20th anniversary — the filmmakers have to pitch it. They present their ideas and we try to pick a mix of ideas, to make sure that there isn’t any repetition. We try to mix veterans and newbies in order to give everyone a chance.”

“It’s an incredible school,” continues Mann. “You really do get fully into it. You work with people who don’t have much experience, and with veterans. It’s not competitive — there are no prizes! It’s created a really strong, really committed network. The Facebook group is extremely active.

“We’re trying to invite anyone who was ever involved on a Kino production,” says Mann. He recoils when I ask him how many people that might be. “Oh man, thousands! Each short film has so many people involved, and thousands have been made in the 20 years since we started. We’re certainly expecting a large crowd!”

The soirée will also include the screening of six exclusive short films produced for the event.

“We basically asked for people to make films that were homages to Kino,” says Mann. “A soft homage, I guess. They still have to be able to be appreciated by someone who isn’t familiar with Kino. We had about 25 proposals; we kept 6. They’re still being finished as we speak! After they’re shown on Friday, we’re exceptionally going to stream them online for 10 days.”

The following weekend kicks off with two conferences. The first will be given by Elsie Lefebvre, director of the crowdfunding platform la Ruche, who will look over alternative funding platforms and crowdfunding. The second conference will be given by Jean-Christophe J. Lamontagne, founder of the Plein(s) Écran(s) online film festival and co-founder of the H264 production company (perhaps not coincidentally the distributor of the two Quebec short films currently in the running for an Oscar).

Festivities will be capped off with a masterclass featuring Philippe Falardeau, a Kino contributor from the very beginning.

All events are free to the public, though Mann admits that with the sheer number of Kino contributors out there, tonight’s party might get a little crowded.

“They’ll definitely see some good shorts, but it’ll be jam-packed,” he laughs. “There’s also the party at Nomad with Mathieu Beauséjour DJing — and that’s a party. Just a party! That’s open to everyone and there’s fun to be had. But Friday is for the initiated. I don’t know how many people will have their first Kino experience there… but they definitely could!” ■