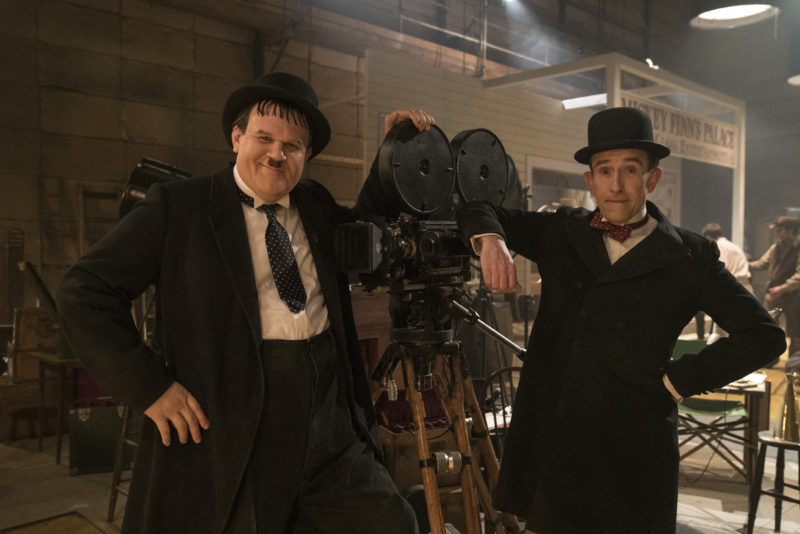 Both Stan Laurel and Oliver Hardy were long dead by the time I was born, and yet they’ve always been part of the iconographic landscape of my life. There was a Laurel & Hardy cartoon on TV when I was a kid, though I could offer no recollection of what it contained besides the insanely catchy theme song. An entire century separates us from Laurel & Hardy, which also means that there are increasingly few people left on Earth who could claim to be fans from their heyday. It becomes dangerous to tackle famous and public personalities once they become symbols, especially ones as easily codified as Laurel & Hardy; anyone who’s listened to a classic 1960s psychedelic rock album from the U.K. recently will tell you that it didn’t take too long before vaudeville became an insufferable signifier of the ill-defined past. Consequently, any Laurel & Hardy biopic made in this present century runs the risk of being stultifying in its performative old-timey spirit — a production designer’s fantasy run wild, bracketed by the unknowable past.

It also doesn’t help that the traditional biopic structure is designed to elevate and worship an artist’s material. Just as Bohemian Rhapsody cannot bring itself to outline any of Queen’s songs as anything other than a bop wrapped in a jam wrapped in an epic singalong, your average Laurel & Hardy biopic should treat their vaudevillian routines as pure gold. What Jon S. Baird’s Stan & Ollie precisely does not do is treat their art as if it were some kind of untouchable relic in the museum. Though it’s clear that Baird has the utmost respect for the subjects of his film, the fact that he doesn’t attempt to frame their work anywhere outside of its very limited scope is one of the many qualities of this uneven but surprisingly moving and elegiac biopic.

Except for a purely utilitarian prologue set in 1937, Stan & Ollie takes place in 1953. Their Hollywood careers now behind them, Stan Laurel (Steve Coogan) and Oliver “Babe” Hardy (John C. Reilly in a fairly convincing fat suit) have accepted a sort of “comeback” tour of the U.K. Though they’re still famous to most audiences, the duo’s popularity is waning — a factor attributable to the emergence of younger talent with a different take on slapstick comedy, but also to an unspoken rift between the two comedians that seems to have opened when Hardy made a film with a different partner after contractual difficulties with producer Hal Roach (Danny Huston) separated them. Stan (who scripts much of the material) views this as a betrayal, while Ollie sees his actions as a necessity in a time of crisis.

As their somewhat low-rent tour of the U.K. unfolds, it becomes clear that the two do this less out of a desire to express themselves and more through a kind of survival instinct. Being onstage is all they know how to do, and they get up there night after night with a professional gusto that never betrays how disappointed and beat-down they are. Baird takes the time to showcase a good half-dozen classic Laurel & Hardy bits and, while they’re expertly delivered by Coogan and Reilly, I can’t say that they pop off the screen. Stan & Ollie does a remarkable job of showing the work behind the business of show — Baird manages to shed all of the baggage of “importance” that the routines may hold now and show us what they’ve always been: two guys acting silly.

Baird is less successful in his attempts to weave Laurel & Hardy-type bits into the narrative. I imagine this is the vaudevillian-biopic equivalent of working song lyrics directly into the dialogue of a musician’s biopic, but it rings pretty hollow when Laurel & Hardy go through a whole slapstick dropping-a-suitcase-down-some-stairs bit in the middle of a movie that also shows how much doing that for decades took out of them. Ditto the characters of their wives, who join up with them about halfway through the tour — Lucille Hardy (Shirley Henderson) and Ida Laurel (Nina Arienda) are curiously one-note and underwritten, functioning chiefly as comic relief (Lucille is a worrywort and a nag; Ida is a self-absorbed former dancer who reminds everyone she meets that she once danced in a Preston Sturges film) — in a movie that already has its share of pratfalls and people being bonked over the head with hammers.

Beyond its rather wishy-washy relationship with comedy, Stan & Ollie turns out to be a moving and contemplative look at professional partnerships and creation. It’s obvious from the get-go that tasks aren’t shared equally in this partnership: Laurel is fastidious and obsessed with perfection, while Hardy is more of an oafish bon vivant who prefers gambling to running lines, and it’s also clear that Laurel has long made his peace with this imbalance because he needs Ollie. Not just to perform, but to exist. As the film progresses we learn that the pair aren’t particularly close outside of work — and yet when they’re together, it’s hard to imagine them ever needing anyone else. Stan & Ollie skirts around nostalgia and potentially fatal biopicitis to delivery a genuinely moving ode to the grind of the creative spirit. ■