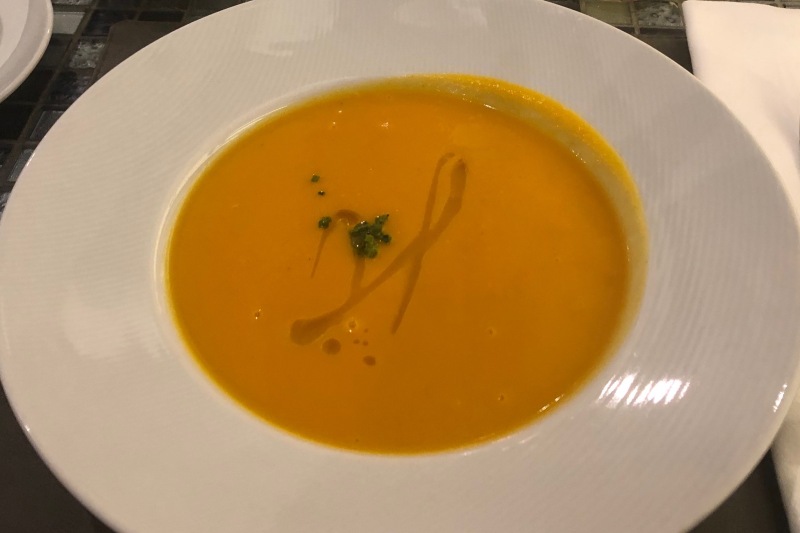 Nora: The wall beside our table looks pleasantly like a metal garage door awning, only made of some kind of dowel-type wood, rising to the ceiling and covered in black lacquered swallows. Behind us, a wall of artfully broken blue plates and to our left, glowing white banisters separating the seating from the bar. It’s a quiet Monday and a managerial type is clasping what’s left of his hairline and flipping through papers on a clipboard. A man takes our jackets to what I can only imagine is a far less chic basement. Owners of contraband, be warned! Your jacket will remain in your possession for only a brief moment before you are cordially seated. Fortunately for me, the insides of my massive and motley coat are so shredded I don’t even trust my gloves in my pockets, let alone something more precious.

The only other table in view features two patrons who look like the fancy otherworld versions of every Plateau boss I’ve ever had, dressed in silken shades of grey and abandoning (!) their nearly full glasses of wine at the end of their meal.

Our server is Pascal, precise ball-point short-form inscribed on the palm of his left hand as he so precisely and quickly rolls off the day’s specials that I for one am too embarrassed to admit I’d retained nothing. No matter, their lunchtime prix-fixe ($25)*, sans special du jour, was actually a meal to marvel at.

Greg: Well I for one was damned glad to be quickly rid of my coat because it’s big and I can never figure out how to drape it on the back of a seat without being terrified the whole time that it’s going to trip someone and ruin everything.

Oh, and I looked it up afterwards as I had a sneaking suspicion that “balding managerial type” you spotted might just be the chef. And indeed it was Chef Joao Dias costing out a menu in the dining room during a sleepy post-holiday Monday lunch service. Respect.

I liked our server Pascal. I liked the smile cemented onto his face.

I didn’t notice him reading off his hand for the specials but it’s no small wonder as it was a bit of a Russian novel and unfortunately for him it was almost totally inconsequential to us as we were laser-focused on the prix-fixe come what may. That being said, the specials didn’t sound perfunctory and boasted a selection of fresh fish and other seafood that were happily on display in a large iced section set into the bar. Another time perhaps.

I didn’t want to do wine so I side-eyed the cocktail list and ordered an insane looking cocktail with tequila, green Chartreuse and chili syrup ($15). I could almost hear it mocking me, daring me to order it. I like strong flavours and love Chartreuse hands down but this cocktail was weird. An ounce of lime juice would’ve done wonders to keep it lively and to keep all those flavours in check. Without it, it ended up tasting like a dusty Mexican alchemist’s closet. Oh well.

Nora: For my part, the glass of white porto ($12) I tasted come 2 p.m. was the first substance, liquid or otherwise, to pass my lips that day. Here I was, floating on a decongestant cloud, proudly prepared to use my nostrils to taste, damnit, stroking with anticipation the grey leather placemat so like a giant wallet.

And taste I did! My sardines, as starter, were impeccable. The perfect warmth, an ample supply of onion, the little tart-sweet cranberries in just the right number, a non-obnoxious size of micro green — discernible as tiny beet leaves rather than some lab-grown specs of chlorophyll.

Greg: My first course was a carrot soup that I really enjoyed for its brutal simplicity. It was a lovely butternut squash colour, passed to a perfect texture and finished with olive oil and chives. It was clearly a winter soup and came across sweet but slightly bitter. I swear I could taste the size of the massive winter carrots that went into it.

I thought your sardines were on point, and rightfully so from a traditional Portuguese restaurant.

Nora: Your soup was definitely lovely. Pleasant also to find two of the three stalwart appetizers vegetarian, the third being a slightly warm tomato salad. Too often a meaty main is prefaced by a meaty introduction, no? And this as we dive headlong into a climate catastrophe in no small way exacerbated by the consumption of meat. 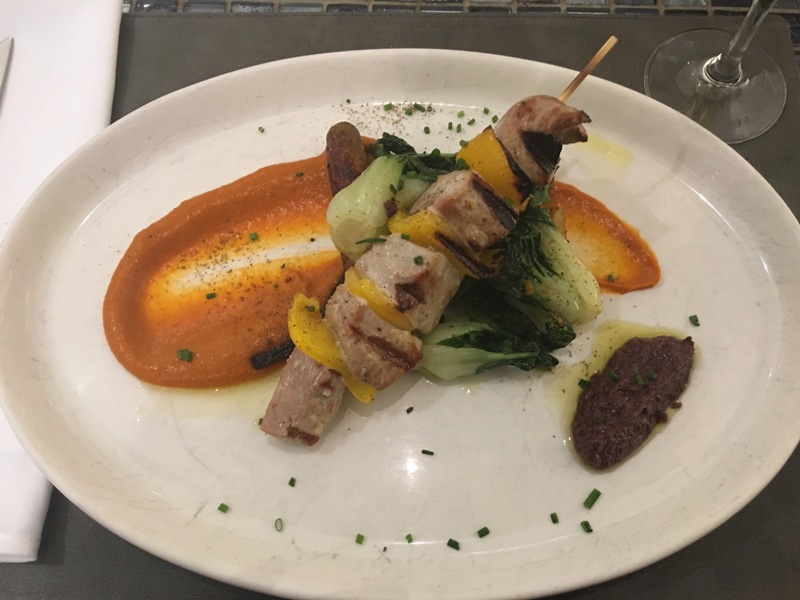 Brochette of the day

I was impressed by the server’s underling arriving with chits nestled between his knuckles that clearly indicated our meals and seat numbers. No inquiries about who had what, thank you very much! Pascal inquires if he may permit himself to pepper our meals. And what follows between us is a discussion of how the etiquette of chic peppering never allows you to actually taste your food beforehand. However lovely the food, there is a presupposed need for pepper, for pepper acolytes that is.

I accepted the pepper over my single plump brochette, lying over a bright assortment of bok choy, witches’ fingers carrots and green beans with a generous carrot paste (let’s call a paste a paste!) and a plump quenelle (let’s call a cute spoon-shaped lump what it is!) of olive tapenade.

Greg: I’d ordered a seafood ragout that came in a monstrous bowl and was full to the brim with a lovely thick rust-coloured mess of root vegetables, Romano beans, clams and mussels in their shells, a smattering of white fish and Matane shrimp crowned with a ruffled shock of fried kale. It was sumptuous and perfect for cold weather. Seeing as how it was a Monday lunch, I also suspect it was a perfect way for the kitchen to pass the various fish and seafood they rotate through their menu on specials over the weekend, and, contrary to what you might have read in Kitchen Confidential, that’s really no reason to avoid a dish in a good restaurant that takes pride in what they present to their clients. 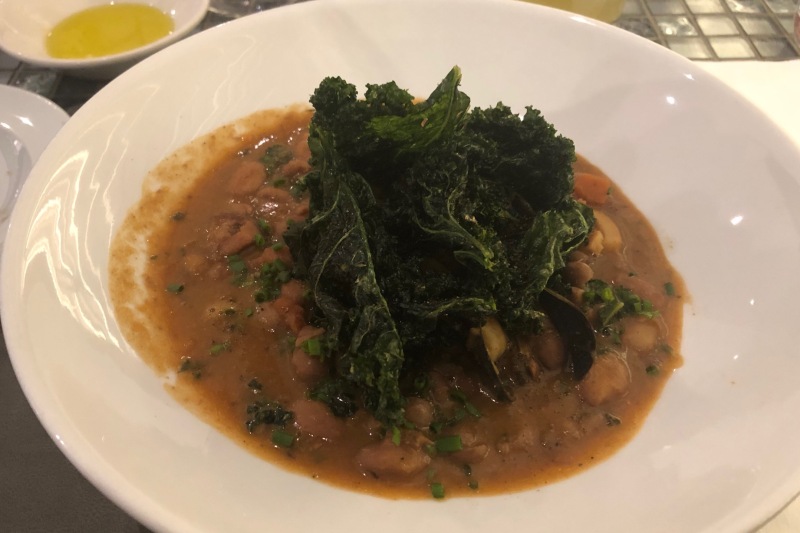 Nora: I thought your ragout was really standout. A murky brown mass, sure, but buttery and hearty. If only you had retained your torpedo-shaped spoon from your first course. That was certainly the only smidge of serving error: leaving you out in the cold with only your fork to fend with for what was clearly a spoon-inclined meal.

Greg: I did miss my spoon but I’m sure Pascal would’ve happily brought me a half dozen had I only asked. The fault was mine entirely.

The pepper mill arriving before you’ve tasted your meal though is a really strange convention. I was lucky and managed to sneak in a forkful of ragout while Pascal smiled and peppered your plate, so I knew what I was getting into. I get why they arrive immediately though, because arriving any later than your third bite would also seem a little bizarre as you’re already tucked in and presumably steeled to accept the level of seasoning as is. Servers could just leave the pepper mill with the table until they pass again in a few minutes to check that everyone is enjoying their meal, or, more ambitiously, restaurants could have small mills on tables instead of those ridiculous shakers. That would be ideal but I’ve never seen it.

I was also pleasantly surprised by your brochette plate. Oftentimes just the word brochette conjures images of lifeless hunks of bone-dry meat protein and impossibly burnt and/or under-cooked peppers but this plate was happily nothing like that. 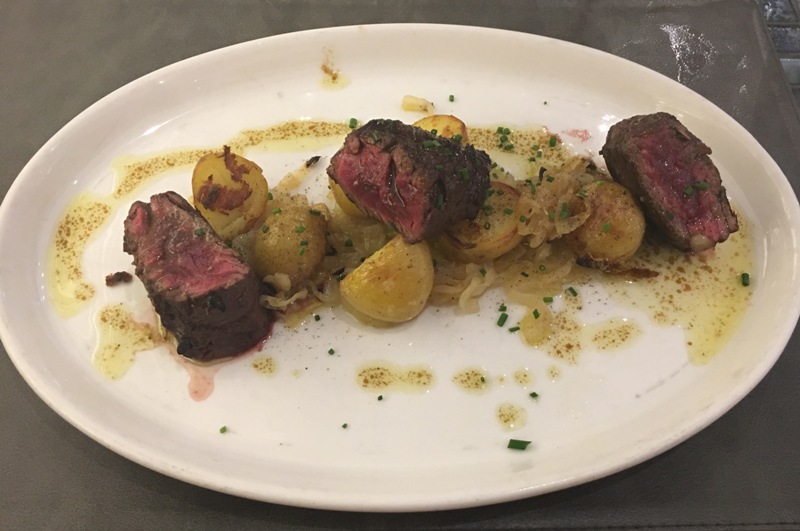 Nora: Exactly. Our dining companion’s onglet de boeuf (saignant) was really wonderful, too, perfectly salted, and seemed possessed of a strange vitality despite being a plate composed exclusively of a tasteful palette of beige, brown, and blood.

Greg: I also thought very highly of the onglet. Much like the soup it wasn’t trying to present itself as a novel re-imagining, but rather a sober and well composed dish cooked expertly and presented well. It’s also refreshing to see such a seafood-centric restaurant succeed with red meat so seemingly effortlessly.

Nora: Maybe best of all, at the very end of the meal when I sought out the washroom, I thought I caught the distinctive outline of a needle-disposal box in my peripheral view while washing my hands. It was, in fact, a floss dispenser, something I’ve never even glimpsed at the dentist’s! But really, that is shockingly considerate, no? Begone, visions of aging wealthy chompers housing all manner of leftover brochette! And wine-bloated fingers needling into incisors, in vain avoiding tracking lipstick in all over the gums. Where there is floss, there is dignity! Amen.

*It’s worth noting that after 10 p.m., Monday to Saturday and excluding the Grand Prix, Ferreira also serves a $30 two-course prix-fixe. ■

See the previous (first) edition of Dine and Gab here.