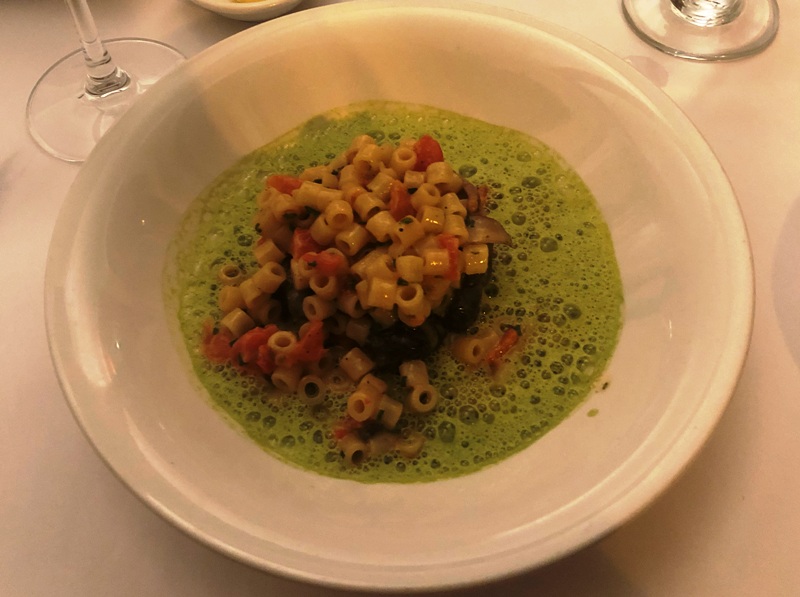 Friends Gregory Vodden and Nora Rosenthal talk about their meals at luxe establishments with secret prix fixe specials actual restaurant workers can afford. The first in a series.

Some first thoughts on that fab nighttime ($28) prix fixe at Leméac after 10 p.m.:

I had no idea snails tasted like tiny mushroom dumplings tinged with the flavour of…blood? I like. To think I could have been eating snails all this time! Also I’m very glad I ordered the most charmingly alien plate as a starter. It’s what I imagine Alf would have eaten if cat was in short supply. Not to mention how nice it is to taste a basil sauce that isn’t pesto: disarmingly plain and comforting with those tiny childish pasta tubes on top. What are they called again?

By the way, I don’t know what you have against queen olives but it was a great joy to find one in my martini in lieu of the jarred pimento variety. Meaty, not unlike the little snails. Though maybe you’re right about them not being quite acidic enough: a little too oily to float around in such a clean drink. If only I hadn’t knocked over my second in front of our server. 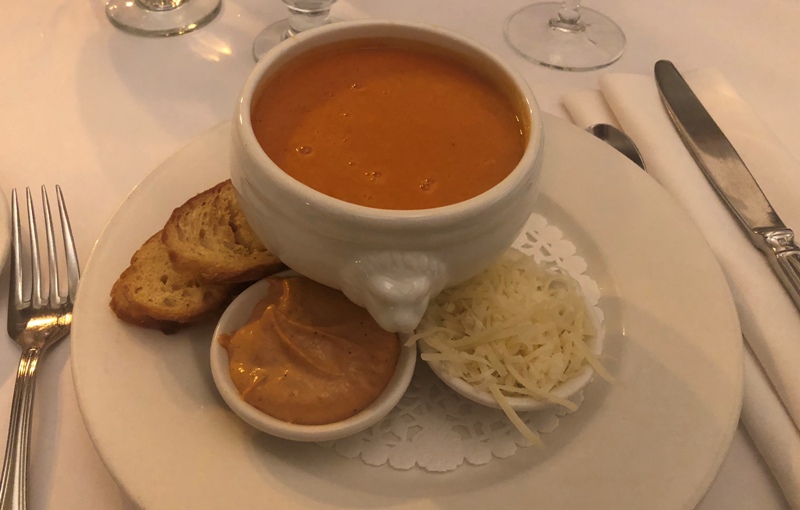 I’m glad you got the snails. It was a good looking dish.

I went in for the fish soup, which is what I imagine cats would eat if they owned French restaurants. It was a beautiful pumpkin colour and came with a cute dish of slightly spicy homemade rouille, croutons and a healthy pile of comté — making it into the tiny pantheon of dishes to successfully combine fish and cheese.

I think the name of the small pasta that was in your escargot salad is ditalini, which is surely “child sphincters” in Italian.

Knowing you so well, I am in no way surprised you won’t let yourself live down spilling your second martini in front of our waiter, and in a deranged gesture of self-flagellation slip it into our correspondence. I am, however, impressed at your restraint in holding back its mention to your second paragraph.

Our entrées were solid but I feel what we should really be talking about is our third dining partner’s entrée: the boudin!

What, pray tell, did you think of that? 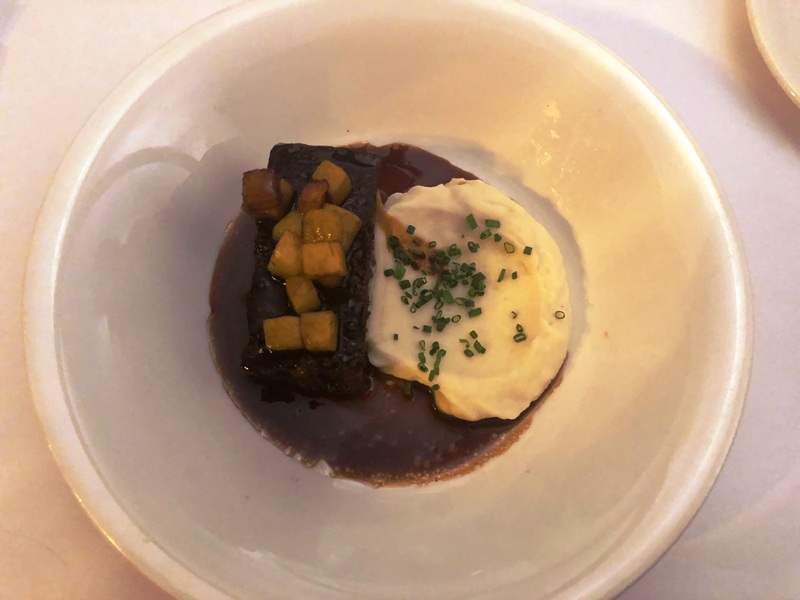 N:  Just looked up “ditalini” — they’re supposed to look like thimbles! Anyhow, wild jealousy is what I thought of the boudin. With the celeriac purée and gravy, the collective richness amounted to a kind of miniaturized Thanksgiving. Some delectable other-world meatloaf. I’m not at all surprised that it’s one of the few dishes to appear as both starter and main. Moreover, it felt like a perfect cold-weather meal, looking out onto the damp construction site that is Rue Laurier at present, or as the hostess told me when I arrived, our “vue de la mer.”

I was even a titch envious of our companion’s mammoth portion of moules and frites by way of main. Even if his Pinot Noir was, as he put it, a little forgettable, it was the most bistro of our bistro meals.

I have a deep fondness for beef tartare, which I finally settled on as my main, but even if it was intrinsically tasty, it felt a little under-seasoned, a little unloved. The vinaigrette was overpoweringly mustardy by comparison, and this is coming from someone with four kinds of mustard in their fridge. And while the lettuce was buttery and tender, I can’t help but feel that that was the intrinsic virtue of the lettuce speaking, and not necessarily that of the chef.

Tell me about your Cornish hen! 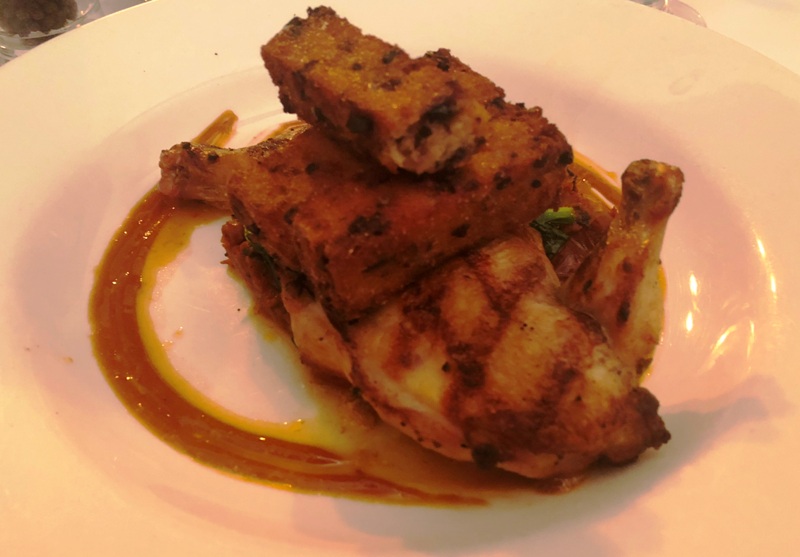 G:  The Cornish hen was excellent.

It was grilled and set on a bed of wilted greens and crowned with tidy batons of fried polenta, stacked like jenga bricks and spackled with flecks of black olives. The plate was finished with a reduced sauce espagnole and the whole thing came together very successfully.

It’s a shame about your tartare. It was definitely a little under-seasoned. It’s a strange idea to underwhelm the tartare and overpower the salad. Had all the mustard kick of your salad’s vinaigrette gone into your tartare instead, and your salad was left a little neutral, I think it would have been more interesting.

You know, when you sat down and told me the hostess had jokingly described our windowside table overlooking the construction hecatomb that is currently Laurier, as a “vue sur le mer” I thought you’d said “vue sur le merde,” which, although appropriate, would have been startlingly glib for a hostess in a white linen restaurant. This certainly clears up some lingering confusion but I feel it’s apt and sums up generally how I feel when I eat in a good French bistro that can (temporarily, at least) provide me with a “vue sur le merde,” rather than a seat in it. 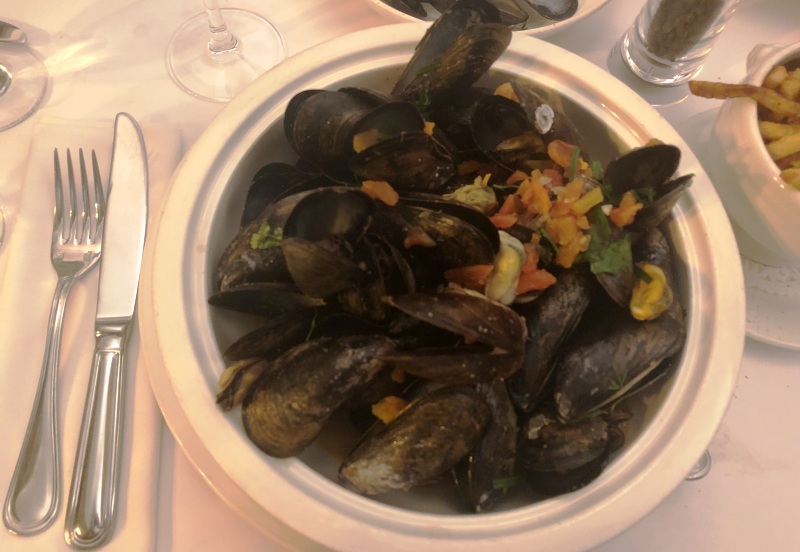 I have to say what pleased me most about Leméac, at least after 10, was the whiff of idealistic class mingling. The unkempt regulars at the table next to ours getting tall glasses of blonde, at least one shamelessly bougie family in their pristine cashmere jackets meeting the cool, unfazed professionalism of the servers. I mean, they let in our ilk! If the world wasn’t so bleak and we didn’t have to drink so much, it would have been downright affordable. We’ll have to do it again soon. XO. ■

Leméac’s late night prix-fixe menu runs from 10 p.m. to midnight, every night of the week.