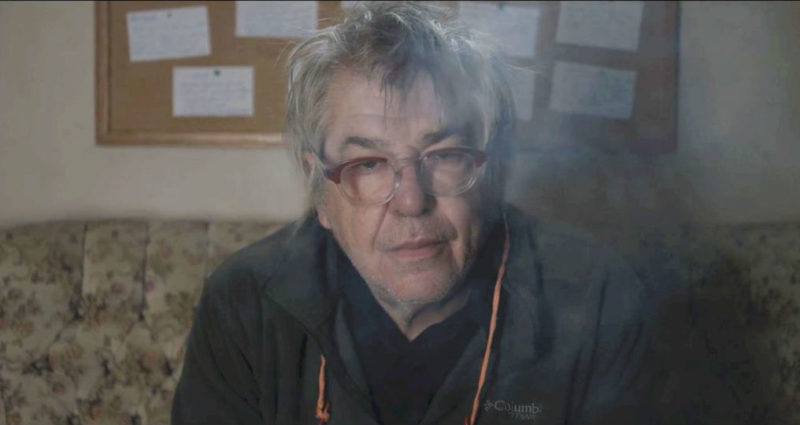 I had already seen one or two of André Forcier’s films when he made his first and most controversial appearance on the Radio-Canada talk show Tout le monde en parle. Though he was ostensibly plugging his film Les états-unis d’Albert, Forcier went on a hell of a tear about financing and the institutional rot that governed film in Quebec. I found Forcier to be almost scary; I imagined that if I ever met him he would tear me apart, because that’s certainly the image the media ran with after his appearance. It would be a little over 10 years before I actually met Forcier, and the man I met had a lot more to do with the one pictured in Jean-Marc E. Roy’s Des histoires inventées: a somewhat churlish but emotionally open and vulnerable man who manages to seem both outspoken and monosyllabic in the space of a single sentence.

Conventional in its aim but unusual in form, Des histoires inventées runs through Forcier’s entire oeuvre out of order, interlacing interview footage with recreations of scenes from his films. Roy uses almost no stock footage or clips, instead recreating scenes entirely with the original actors and having Forcier walk through them or exist in the margins as they unfold. In some cases, this means actors that are 35 or 40 years older than they were in the original film, lending the film an interesting meta-experimental dimension that expands the constraints of the typical biographical doc. It’s the polar opposite, stylistically, of something like DePalma; although, much like that film, it does an extremely good job of making you want to watch (or re-watch) Forcier’s entire oeuvre.

It’s also a fairly good Rosetta stone for Forcier’s work, the hallmarks of which are magical realism and highly unnatural dialogue that can be off-putting at first. I’ve found some of his films difficult in the past, but hearing Forcier talk about his approach and what cinema means to him (basically everything) sort of unlocks the intention behind each film. I wouldn’t call this propaganda, per se, but it makes a damn compelling argument. (Alex Rose)

Dark Suns, by Julien Elie, charts the increase in disappearances and murders in Mexico, not arising from the kinds of violent clashes between cartels and police forces that make our news, but the disappearances of young people, and in particular, women. The film’s bleakness would be overwhelming were it not for the sheer cogency of the people interviewed, many of them activists, many of them women, and many of whom have themselves lost someone close.

Dark Suns is a traditionally investigative film, and the questions posed are precise and astute. We don’t examine the tragedy of the young women lost so much as why they were taken and under the aegis of which government agency. One journalist interviewed by Elie likens the loss of the young to a forced conscription. Many of the lost may indeed be dead, but the film explores a predicament seemingly unique to Mexico: that they could also have been drafted. Press-ganged into cartels or brothels.

We see lanyards bearing big laminated photos of the dead or lost, and plastic water bottles and fans and T-shirts, all emblazoned with someone’s smiling child. It is overwhelming, but undeniably powerful. We visit several places where cartels dump bodies and where activists seek out their bones. It’s one thing to read about a body count, quite another to show this bridge, this river, this lush forest path. Hearing that foot bones often remain intact thanks to the socks of the victim is not something I will soon forget. This film’s haunting specificity is its ultimate forte. (Nora Rosenthal)