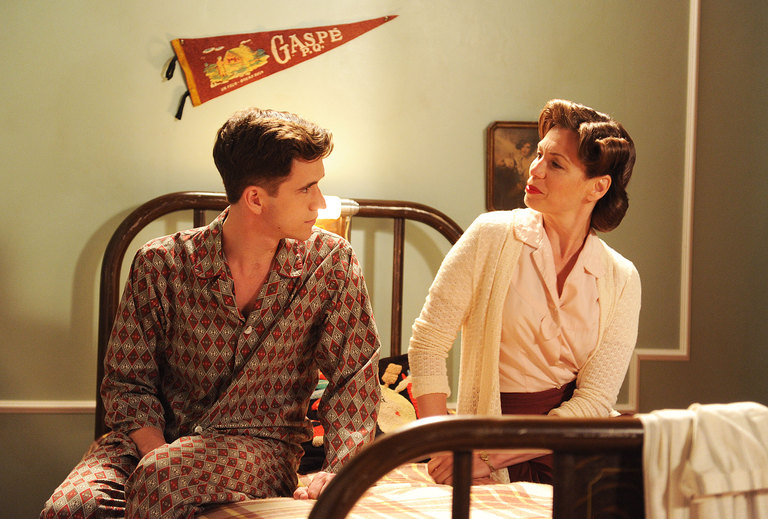 Marc-André Forcier (bka André Forcier) has long occupied a very particular spot in the cinematic landscape of Quebec. Known for his use of magical realism in his films, the extremely identifiable tone of his dialogue (which often mixes joual with outsized, blatant poetic language) and his rather outspoken views on the industry (let’s say it’s no surprise Forcier gets along so well with Serge Losique), Forcier has worked with nearly every actor of renown in Quebec. A good chunk of them appear in his latest film, the unpinnable period fantasy/comedy/drama Embrasse-moi comme tu m’aimes, which opens this Friday, and I spoke with many of them (as well as Forcier) soon after the film’s world premiere at FFM.

Set in the early 1940s, it tells the story of Pierre (Émile Schneider), the son of a widowed dressmaker (Céline Bonnier) who dreams of going off to fight the Nazis. He’s unable to ship off, however, because of his twin sister Berthe (Juliette Gosselin), who is confined to a wheelchair since birth. Berthe needs him and he doesn’t dare leaving her despite the fact that he is constantly plagued with unwanted desires for her. His best friend Ollier (Luca Asselin) has a pretty good chance of making the major leagues in American baseball, but he’s more interested in settling down with his girlfriend Marguerite St-Germain (Mylène Mackay), who in turn dreams of a life beyond that of being a shopgirl-turned-housewife.

“I’m fairly critical of French-Canadians who were manipulated by the clergy and who refused to fight the Nazis,” explains Forcier. “That was the way things were — people weren’t educated, they were colonized. That ideal interested me, but to create a character based on that ideal, I had to throw a roadblock in his way. That’s where I came up with the character of Berthe, who is apparently wheelchair-bound because of him — because the umbilical cord wrapped around her in the womb. I wanted her to be independent but lovestruck, with Pierre being a character who’s completely obsessed with his sister. I wasn’t interested, however, in showing characters tortured by their incestual passions.”

“It’s not like incest is accepted by the film,” explains Mackay. “What happens between Émile and Juliette, I really see as being more about the idea of twins. Berthe is sort of Pierre’s dark side. It’s about the right and wrong of our fantasies, about all the things we’re not allowed to do in life. But it’s certainly not pro-incest!”

“It was impressive for me to see all of these people understand the message and the poetry of it and decide to lend their voice to it,” says Asselin, for whom the film marks the first significant film role to date. “People are locked in and ready. It’s like arriving at… no, actually, it’s like leaving boot camp and arriving on the battlefield.”

Forcier’s particular knack for dialogue that sounds both poetic and specifically dated is particularly well-served by the film’s setting, which weaves magical realism (when Bertrand violently pushes his father into the wall during an argument, the father leaves a Wile E. Coyote-style outline that remains there for the rest of the film) with period detail (a handful of real-life characters show up, including Arcand as Édouard Montpetit). Everyone who works on the film is adamant: working on a Forcier film is closer to working on a play than nearly any other movie they’ve done. 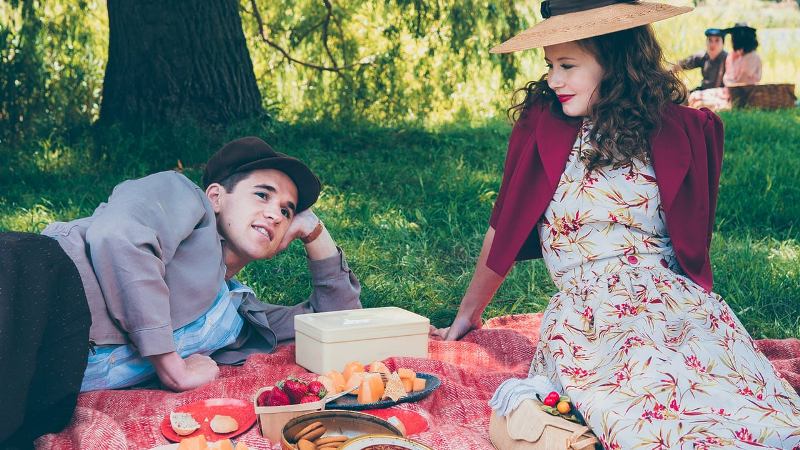 “Sometimes in television, we develop the bad habit of adding superfluous words,” explains Montpetit. “With Forcier, you can’t do that. It’s too precisely written. (…) It’s funny, but my understanding of it is that this is realist cinema. It embraces all aspects of life. It’s kind of a cliché, but if you ask a child to describe the world, he’ll give you all these details. The older you get, the more your worldview shrinks. There’s an abundance of riches in his work — there’s contradictions and all kinds of things playing against each other. He doesn’t judge — he shows misery, madness, ecstasy, it’s all there!”

“It’s very rare that you see someone who writes that way in cinema,” says Dupuis. “I don’t know of any others. When you act in a film, generally, you can appropriate the text a little, change the words and the syntax to better fit what you feel. With Marc-André, it’s closer to… actually, no, it’s exactly like theatre. You don’t touch a word, and you don’t feel like you need to. (…) I think there are actors who can play Forcier and actors who can’t.”

“Those who can play Forcier, they can do that because I write a role for them,” Forcier deadpans. “It’s a nice metaphor, but I know what he means. There needs to be a certain liberty in the sense that my dialogue seems realistic on the surface, but I try to give them the melody of a song. You have to get used to that kind of gymnastics. I want it to look like casual talk without sounding like it.”

“It’s a fairy tale,” says de Léan. “It could have happened in Montreal in the ’40s, but the core of it is a fairytale.”

“I see it almost exactly as theatre,” adds Mackay. “Coming as I do from theatre school, I’ve done Shakespeare, Tremblay, poetry readings… I feel like André puts a lot of everything in his work. It can move from pretty crass, pretty crunchy dialogue to much more lyrical stuff, but that’s what makes him such an interesting creator.” 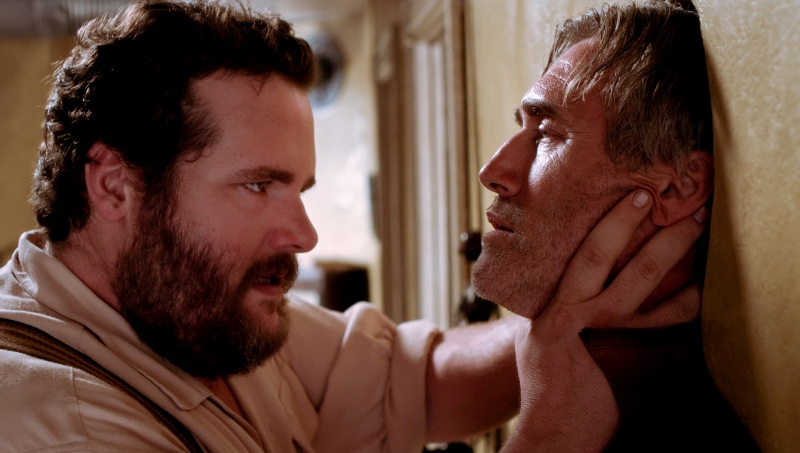 “If I hadn’t seen any Forcier films, I’m not sure I would’ve been able to wrap my head around the dialogue,” says Asselin. “I have to admit I’d never read anything like this. Everything is wrapped up in poetry and emotion, and you have to add on top of that a level of language that’s so well-written that it becomes almost a political act. We’re Québécois, we know how to talk, we can use proper French AND we can be as blunt and as vulgar as we want — sometimes in the same sentence. (…) It’s more than theatre — it’s sheet music.”

“Contrary to most filmmakers I usually work with, when I work with Marc-André, I feel no need to go and dig into reality to create my character,” explains Dupuis.”I just want to be with Marc-André and listen to him talk about the story and the characters, because they’re all part of his universe. This movie was no different.”

The film also has some of the more opulent period production design of recent years. “It’s not easy making a movie about 1940 in 2015,” says Forcier. “I wanted to shoot in Little Burgundy for the scenes of the St-Germain household, but we ended up finding it in Lachine. That was close enough to Saint-Cunégonde since you had 50 per cent francophones, 25 per cent Irish and 25 per cent black people. We’d go and play bumper pool with them at the bar salon on the corner. That’s where I ‘squatted’ my youth.”

“His films don’t age,” says Montpetit. “They don’t get dated and they don’t age, I think, because they don’t try to show reality. (…) It’s real cinema. It’s not TV, writing or theatre. It’s cinema!”

Forcier has also amassed a reputation as a bit of an opinionated enfant terrible of the Quebec film scene, where the ruffling of feathers never goes unnoticed. Forcier admits that he’s mellowed out some. “I have nothing to complain about,” he says. “I’m 69 years old. I’ve made movies. I’ve had some lukewarm periods because I attacked the systems of distribution and I was sent to the corner to think about what I’d done during the time I was making Je me souviens and Coteau Rouge. But I’m a good boy now, I don’t say anything untoward about others.” ■

Embrasse-moi comme tu m’aimes opens in theatres in French and (as Kiss Me Like a Lover) in English on Friday, Sept. 16.