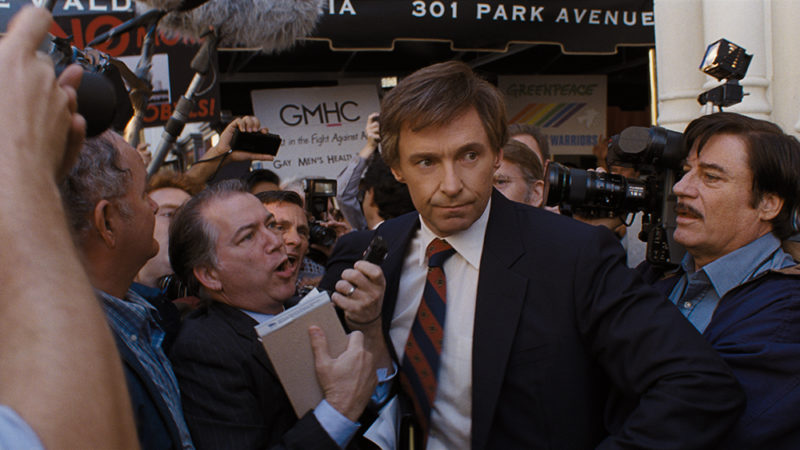 Hugh Jackman in The Front Runner

It’s inevitable that The Front Runner, no matter how you actually feel about it, is impossibly tarnished by peculiar timing. All films are a product of their time to varying degrees, but The Front Runner is inevitably going to be compared to the times we live in. It’s a deliberate choice from director Jason Reitman. In choosing to tell the story of disgraced presidential candidate Gary Hart in 2018, Reitman is clearly trying to draw parallels with the current political situation. But so much has changed since the film went into production in mid-2017 that The Front Runner’s parallels grow more irrelevant and quaint by the day. The American political situation is such a trainwreck that a movie actually made to point out that the very nature of scandal has changed has already become passé.

In that respect, perhaps The Front Runner will age better than most. Reitman certainly seems to be taking inspiration from a bygone era; there’s a definite Altman influence in the way the dialogue and sound mixing constantly overlap and careen into each other, and Reitman generally seems to take great inspiration from a long line of journalistic thrillers running from All The President’s Men to The Post. Unfortunately, those similarities are mostly structural and aesthetic. The Front Runner is built to look and sound like a canonical Great Movie, but it never feels like it hits any kind of stride, lost between visual concerns and a muddled mission to tell the even-handed truth.

Senator Gary Hart (Hugh Jackman), having lost the Democratic nomination to Walter Mondale in 1984, finds himself the front runner for the 1988 elections. Hart is your typical Midwestern baby-kissing Democrat: a sturdy, family-loving everyman who appears in public with his loving wife (Vera Farmiga) and teenage daughter (Kaitlyn Dever). As his campaign begins to pick up steam, the eyes of the world are turned on Hart. His rallies and meetings become increasingly filled up with journalists eager to report on his every move. A party on a yacht thrown by Hart’s sketchy acolyte soon turns up rumours of an extramarital tryst, which the woman in question (Sara Paxton) throws herself into before finding herself way in over her head. The very idea of Hart’s affair becomes the driving narrative of the entire campaign, with journalists all over the United States throwing themselves at scraps of information in order to get the scoop.

Reitman takes a page from Soderbergh’s The Informant! by casting most of the supporting roles with comedians or actors generally known for comedic roles. Both the journalists (Bill Burr, Steve Zissis, Kevin Pollak, Ari Graynor, Mike Lawrence) and the staffers (Oliver Cooper, Josh Brener, Alex Karpovsky, etc.) are cast with funny people given very little to do in the way of funny. It’s a tactic that usually helps streamline a movie where pausing to explain the roles of every political attaché, deputy campaign manager and assistant to the assistant editor isn’t possible. What it does in The Front Runner is exacerbate the film’s fatal flaw: it has absolutely no point-of-view.

The Front Runner should be Gary Hart’s story — he’s on the poster, but he’s not the main character. We follow him around some, but Reitman always keeps him at arm’s length. He isn’t the audience surrogate and he isn’t even really a figure of relatability. Most tellingly, Reitman opts to keep what actually happened between Hart and Donna Rice vague and off-screen. The point, you see, is not whether or not Hart cheated on his wife — it’s what we made of it. Historical films dealing with major figures will often invent a tertiary character to serve as the audience surrogate, an imaginary guide through history that can better help us relativitize figures that are perhaps too immense to grasp on their own. Gary Hart isn’t exactly Idi Amin on that front, but The Front Runner does invent a journalist character (played by Mamoudou Athie) that appears to be the audience stand-in the early parts of the film — only to melt away alongside everything else in this big vague tapestry of political clusterfucking.

The lack of a central figure — any figure at all, really — besides the intentionally thinly defined Hart means that The Front Runner spreads whatever points it wants to make as thin as possible. In that sense, it’s a conscious choice; in order to talk about the multitudes of issues that rose up during the Hart scandal, Reitman has to avoid taking sides — but no one actually makes a political movie without taking sides. The two takeaways I had from this movie were a) how could we do this to one of our guys; b) journalists are ethically compromised monsters because they did this to one of their guys, and perhaps we should look the other way instead of shooting ourselves in the foot when a situation like this one arises.

These are, I guess, fine points to make, except they have no mouthpiece, no direction in the film. They’re just points made in a truly chaotic environment where information is constantly changing, people are making ill-advised choices and self-preservation becomes a misshapen, unknowable thing. I don’t think that someone like Oliver Stone would’ve necessarily made a better film out of the Gary Hart story, but it would have been one with a point to make. What this movie needs, perplexingly, is more editorializing. When the film was announced in 2017, Reitman called it a “political comedy;” the final product is only a comedy inasmuch as the very idea of politics is funny.

It’s not that The Front Runner is that incompetently put together or amateurish. Its performances are generally good and the sense of chaos is rather well orchestrated – but to what end? It seems that part of the driving force behind The Front Runner is this idea that an affair would never in a million years sink a presidential candidate in 2018 – but so what? If all you’re going to do is hold this up against the current political landscape and repeatedly ask the audience if they can believe it, you’d better come prepared. Reitman ultimately only engages half-assedly with the ideas he raises, painting with so wide a brush that nuance – and, ultimately, purpose – gets lost. I imagine he sees the chaotic balance of the film as a fresco or a tapestry; if you lean in to get a closer look, however, you’ll notice no one managed to paint faces on any of the people in it. ■

The Front Runner opens in theatres on Wednesday, Nov. 21. Watch the trailer here: