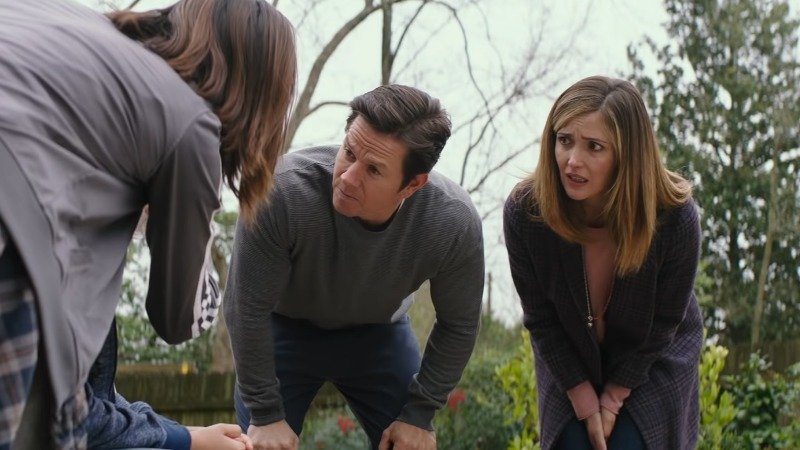 Based on the true story of writer/director Sean Anders’ own family, Instant Family is a comedy about a couple that impulsively decides to adopt through the foster system. Rose Byrne and Mark Wahlberg play Ellie and Pete, a house-flipping husband and wife who, due to newfound financial security and age anxiety, decide to dive deep into parenthood and adopt some older children.

Perhaps recognizing the importance of “getting things right,” Anders aims towards naturalism over exaggeration as a source of largely feel-good laughs. Rather than paint broad strokes and build off increasingly uncomfortable stereotypes, the movie is a rather nuanced view of the American foster system, which navigates the ethical and practical difficulties of working within that political arena with a surprising amount of understanding.

Of course, this is far from a kitchen-sink verité drama in the spirit of Mike Leigh, but it does try to represent both the importance of child fostering, drawing most of the laughs in the day-to-day struggles of adjusting to instantaneous parenthood to children who need extra support and love. While it’s super easy to cringe or roll your eyes at using a family-friendly Mark Wahlberg film as a “teachable” moment, it also feels unnecessarily cynical to also condemn the film for making the effort, in particular as it tackles negative stereotypes associated with the foster system in the U.S.

The movie never skirts the very real consequences of growing up under the care of the government and even showcases some badly intentioned actors within it, but in finding comedy in these situations, the movie serves to humanize its subject. The movie is comedic in a way that is incredibly human, finding pleasure in a kid’s note about the Fart Zone or Rose Byrne’s obsessive need for affirmation. It draws out the most simple and difficult elements of parenthood and family, affectionately turning them for laughs.

The film is bolstered by a strong supporting cast. Tom Segura keeps things high and tight as the impishly maniacal husband of Ellie’s baby-crazy sister. It is a small role but a notable one as Segura effortlessly adapts his warmly sociopathic comedic stylings to an ensemble without losing his sense of timing and tone. Octavia Spencer and Tig Notaro are great as an odd-couple pair of social workers, offering a lot of the film’s exposition, while also being great emotional and informational anchors for the narrative trajectory. As the two diametrically opposed grandmothers, Margo Martindale and Julie Hagerty are fabulously obsessive and steal nearly every scene they’re in. The only exception to the cast is the usually fantastic Joan Cusack, who is shoehorned into the final act — it’s not that she’s bad, but she feels out of place and underused. Justice for Joan!

Above all though, the kids are fantastic, a credit to Anders and the cast. One thing that really sets this movie apart is a deep empathy for the children. They are not precocious adult mouthpieces, but kids trying to make sense of an incredibly confusing environment. Pulled around from one family to the next, it is unsurprising that they have trust issues and difficulty adapting to new environments. The movie draws out how frustrating this can be for Ellie and Pete, without ever losing sight for how difficult it must be for the kids as well.

As Lizzie, the 15-year-old “big sister,” Isabela Moner is especially good. She becomes the connecting force between two families and the daily struggle that comes with it. The movie never loses sight of the fact that, while forced to grow up far too soon, she is still a teenager – which means she is caught between adulthood and childhood. It’s a movie that uniquely “gets” the hormonal insecure hell of adolescence from the standpoints of being a teen and of living with one.

Instant Family is also strangely beautiful. Scenes unfold during the golden hour and family scenes are allowed time to breathe. It’s not formally groundbreaking, but it is refreshing to have a movie that recognizes hanging back in favour of unnecessary expediency. Too often, modern comedies rely on heavy cutting, thereby removing a natural sense of flow. This movie has an unusual patience, and if I’m relying so heavily on words like “weird” and “unexpected,” it’s because it’s so rare that an American mainstream comedy channels both depth and humanity.

If the film has one major flaw, it’s that it might be a touch too long. The movie threatens to wear out its welcome, though it does feel like it earns the time it’s been given. It’s a pretty humble film with earnest aspirations that it manages to lay out honestly through flawed and complex characters and institutions. Maybe it’s sugar-coated and maybe it’s not, but it’s a sincerely engaging film. ■