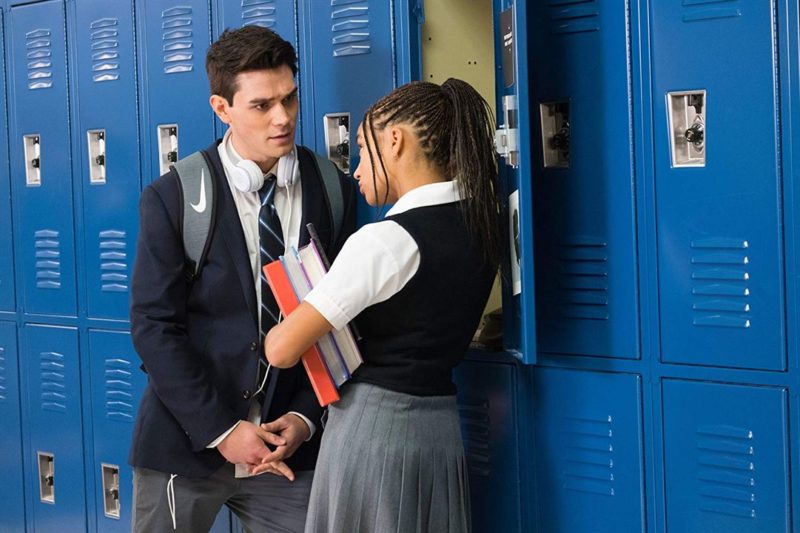 KJ Apa and Amandla Sternberg in The Hate U Give

One of the things I tend to come down the hardest on is the idea of “hand-holding,” where films that are pointedly about something make sure that viewers get exactly what it’s about. But, of course, all movies are about something, and one generally assumes all the tools are in place to make a movie without actually having to underline its messages with a felt-tip marker. What this knee-jerk reaction about hand-holding ignores, however, is the target audience. The Hate U Give is a film about racism and police brutality that feels like it’s aimed at adults in its intensity, breadth and scope, but it’s based on a Young Adult novel that, in turn, results in a film aimed primarily at teenagers. It means that director George Tillman Jr. builds his case convincingly but without much concern for the subtlety of the message. Considering what The Hate U Give is about, however, perhaps being beat over the head is the only acceptable method.

Starr (Amandla Sternberg) lives in a poor, predominantly black neighbourhood with her parents Lisa (Regina Hall) and Maverick (Russell Hornsby). It’s where her parents grew up and where her father, a reformed gang member, has turned his life around by running a convenience store. Starr’s family and friends all live in the neighbourhood, but her parents are conscious that sending her to school there may not afford her all of the best options, and thus Starr is driven across town every morning to attend a tony, predominantly white private school. Starr outlines the two parts of her personality: the code-switching that happens when she’s with childhood friends and when she’s with her private school friends, who embody the well-meaning cluelessness of white privilege. (Her boyfriend, a white guy played by Riverdale’s Sexy Archie, KJ Apa, is the closest thing to an ally she has, even though he, too, comes across mostly as clueless.)

Starr navigates those two worlds with some amount of difficulty, torn between her identity and the often circuitous paths offered to black people in her community. After a party goes awry when a gunshot goes off, Starr accepts a ride from her childhood best friend Khalil (Algee Smith), an affable young man who has nevertheless been stuck with the kind of circumstances that are offered to most young men in his neighbourhood. It all comes to a screeching halt when a routine traffic stop finds Khalil dead at the hands of a white police officer, propelling Starr to the middle of a judicial circus that finds her torn between the two worlds.

Tillman Jr. pulls off a hell of a balancing act. Though not exactly an epic fresco from a narrative point of view, there’s a lot to juggle here from the micro to the macro level, and it’s a real testament to both the filmmaker and the source material that so much of it comes off the page organically. The Hate U Give packs nearly a TV season’s worth of character development and texture into 132 minutes — it’s rare that a single feature feels so lived-in while also feeling so immediate and fired up. It’s also doubly surprising considering that Tillman never really followed up on the promise of his film Soul Food, instead making primarily mediocre studio work like Men of Honor or Faster.

Thematically, however, one gets the feeling the film was never going to be able to cover as much ground as the book. The result is that some supporting characters essentially get reduced to soundbites and sloganeering (the mean white “all lives matter” schoolfriend, the “good cop” uncle played by Common, the community activist played by Insecure’s Issa Rae) in a way that feels less organic. They’re topics that inevitably need to be approached in the material but they’re ultimately done a disservice by how secondary they feel to the main action. On the other hand, you can’t really talk about police murdering black men without bringing up the whole aspect of white women gunning hard for a seat on the all-lives-matter train, and I’d rather see it done this way than not at all.

Fact is that The Hate U Give (the title is based on the acronym that Tupac Shakur used to explain the maxim Thug Life — “the hate u give little infants fucks everybody”) is remarkably intense and incendiary for a film of any stripe. It’s very easy to forget that the film is not, in fact, geared towards my privileged mayonnaise ass. It would have been so easy to fuck this up — make it too simplistic, or talk down to your audience, or focus too much on the dozen things that could very much be their own movie, or get bogged down in either righteous anger or pornographic melodrama — but The Hate U Give is stunningly realized and supremely confident. There’s a twist in this that is surprisingly similar to one of the most preposterous and manipulative twists in Paul Haggis’s vomitous Crash — and it works. I can’t begin to explain what kind of miracle that entails. ■

The Hate U Give opens in theatres on Friday, Oct 19. Watch the trailer here: