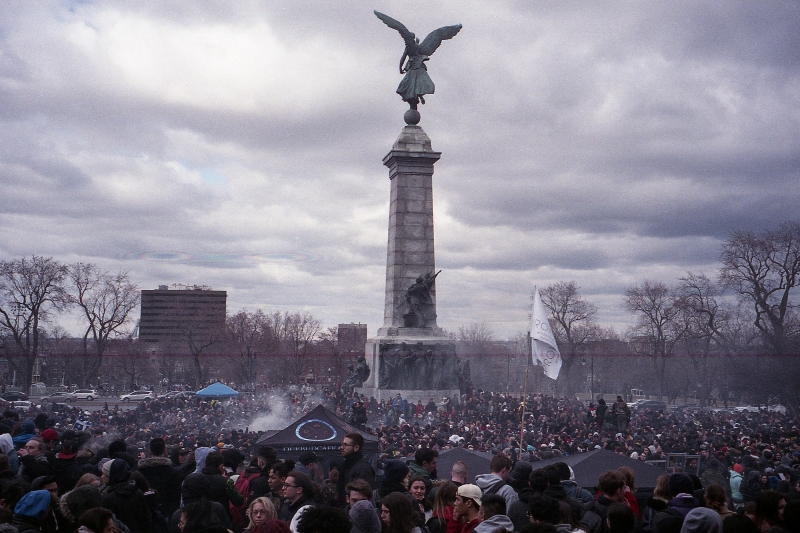 It’s official. Oct. 17 is Canada’s national 4/20, the day that our current cannabis legislation, the Access to Cannabis for Medical Purposes Regulations (ACMPR), is switched out for the new federal framework for cannabis legalization, Bill C-45.

The government has made it clear that in the meantime the current laws still stand and will be enforced, while carefully deflecting any further discussion about amnesty for previous offenders with cannabis-related convictions. This means that you could still be arrested and charged for the very same acts of recreational cannabis use that will be permitted and protected under law in just a couple of weeks.

Although overturning a century of failed prohibition marks a milestone in the history of federal cannabis regulation, the blanket term “legalization” obscures much of what this actually looks like in practice and how it will vary across the provinces and territories. Legalization does not mean anti-prohibition.

With so many of the practical logistics of Bill C-45 being delegated to the provinces and territories, stark differences are already emerging between each government’s approach to regulating the new market and the social context around it, giving advocates and critics alike plenty to discuss. And this is before the first legal joint has even been lit.

After much political friction on a provincial level, Quebec adopted its own framework in June of this year. The Cannabis Regulation Act lays out the rules and regulations for how and where cannabis will be sold and produced, who can purchase it and where they can consume it. It also accounts for the workplace and road safety, distribution, retail and health promotion aspects, as well as the granting of cannabis production permits.

Over the past few months word has spread about Quebec’s new gatekeeper for cannabis sales in the province, the Société Québécoise du Cannabis (SQDC). The SQDC will monopolize the retail of cannabis across the province from what is being called “a health protection perspective,” which seeks to integrate recreational cannabis users into the legal market without encouraging use. According to the SQDC, “the stores will be sober in appearance, both indoors and out, and no promotion or encouragement to consume will be found, be it in the form of displays, posters, literature for customers, product labels or the advice provided in the store.” Picture an SAQ-like establishment, minus the colourful liquor ads, the promotional displays and free samples, with employees standing behind counters attempting to sell you a product while also not trying to promote it.

Critics of the Cannabis Regulation Act have vocalized their opposition to the proposed government-centralized system, including Bloc Pot candidate Hugo St-Onge, who describes it as a way for the oligarchy to protect their market under the guise of public health and safety. But it isn’t the only questionable aspect of the Act; Quebec is recognized to have some of the most conservative laws among all of the provinces and territories.

So before you start celebrating legalization, here are a few things you should know about Quebec’s Cannabis Regulation Act:

Who can purchase and consume cannabis?

Adults 18 years or older can purchase up to 30g of dried cannabis (or the equivalent of fresh cannabis) at a time.

Where can cannabis be purchased?

A newly created subsidiary of the SAQ, the Société Québécoise du Cannabis (SQDC), will be the only official point of sale in the province. It will offer both online and in-store retail options. According to the SDQC, “The SQDC will gradually open some 20 points of sale as soon as the federal act comes into force,” and will continue to add more locations until 2020. Four of these stores will be located in Montreal, however the Ville-Marie location (830 Ste-Catherine E.) is only opening later this month. The other three, which will all open this Wednesday, Oct. 17, are located at 6872 St-Hubert, 9250 l’Acadie and 970 Ste-Catherine W.). Private retail has been banned within the province, effectively excluding potential local independent businesses and illegitimate markets from legally integrating into the new industry.

Where can cannabis be consumed?

Restrictions on tobacco smoking and vaping apply to cannabis as well.You can consume cannabis at home and in some public spaces, however you won’t be able to smoke cannabis on the property of schools, including universities and CEGEPs, health and social service institutions, public parks and bike paths, restaurants and public transit stops, to name a few. An exhaustive list of additional restrictions on cannabis smoking is available on the Services Québec website. There is also the legal possibility for landlords to change the terms of a lease (up to 90 days after the date of legalization) to ban smoking cannabis on the property. With many restrictions already limiting public consumption, this amendment poses significant barriers for tenants who use cannabis.

What kinds of cannabis products will be available?

The SQDC will sell dried and fresh cannabis and cannabis oils. Edibles (cannabis-infused food and drink) are not part of the federal framework yet and will not be available for sale in stores at the time of legalization. Cannabis accessories will also be available in-store and from other independent retailers.

How much will cannabis cost?

According to the SQDC, “the retail sale price of cannabis has not yet been determined. However, it will be balanced, which is to say attractive enough to discourage illegal sales but not so low as to encourage people to increase their consumption.” Cannabis consumers will have to pay a federal excise tax on cannabis products, which is proposed to be $1 or 10 per cent of the retail price per gram.

How much can a single person possess at any one time?

How many cannabis plants can be grown per household?

None. Quebec has been vocal about its firm opposition to the federal framework, which allows up to four cannabis plants to be grown per household. At this time Manitoba and Nunavut are the only other provinces dissenting from the federal recommendations on personal cultivation. Only commercial producers with licences issued by the Quebec government are allowed to cultivate and process cannabis products within the province.

Can I drive after having consumed cannabis?

There will be zero tolerance for driving under the influence of cannabis, with even stricter punishments for driving while high being implemented under the new amendments to the Highway Safety Code in relation to the legalization of cannabis. A saliva screening test  will be used to detect cannabis, and a positive sample could result in an immediate 90 day licence suspension and fines starting at $1,500.

NOTE: The newly elected provincial majority government, the Coalition Avenir Québec (CAQ), has a very different opinion on how cannabis should be managed within the province. Leader François Legault stated early in the campaign that he would raise the legal age from 18 to 21 if elected. In June Radio Canada reported that the CAQ voted against Quebec’s current cannabis bill for this same reason, among others. With the date of legalization only weeks away, the rules and regulations surrounding cannabis in the province could be subject to change. In the meantime, all eyes are on the new provincial government as Quebecers prepare for cannabis legalization. ■