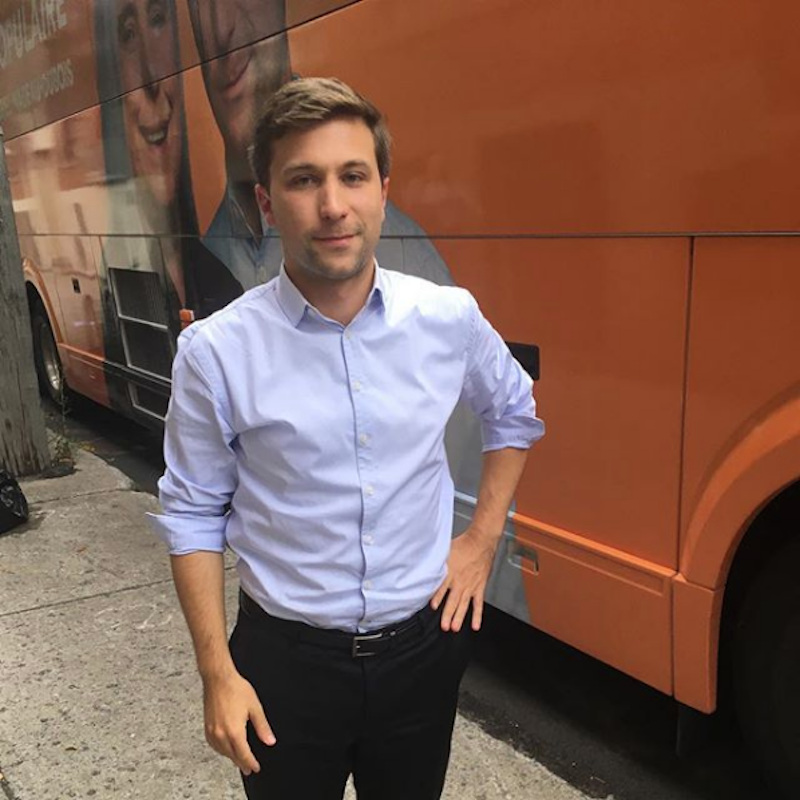 It’s less than one week from election day in Quebec and polls have seen some significant shifts in the past few days.

The CAQ have slipped below projected majority status and may have a tight two-way contest with the Liberals. Perhaps more surprising is that the race for third place is almost as tight. In the past, Québec solidaire was something of a protest vote limited to Plateau-adjacent Montreal. Today, QS is now pulling much closer to the PQ and may grab seats off-island for the first time.

One of the things that may determine QS’s success is their ability to appeal to social democrat Anglo and Allophone voters in Montreal. I interviewed co-spokesperson Gabriel Nadeau-Dubois on the topics of immigration, secularism and identity when the QS tour bus made a stop in Villeray last week.

Robert Jennings: Sum up in a few words Québec solidaire’s vision for Quebec

Gabriel Nadeau-Dubois: We are proposing very concrete measures that will help people in everyday life. Our public dental care plan, our economic transition plan, our proposal to lower public transit costs by 50%. You know all of those things are very concrete, but they sum up to a vision for a very, very different Quebec.

RJ: There are tons of left-wing Anglophones in Montreal, but probably not very many of them are for the independence of Quebec. Why do you think those people should vote for Québec solidaire?

GND: The bold changes that we want to see happen in Quebec cannot realistically be achieved inside our current political institutions, which are not democratic enough, which don’t give enough space to our First Nations, which don’t recognize the right to self-determination for all peoples of Canada.

RJ: So you think that it would be harder to make these changes inside Canada than in an independent Quebec?

RJ: What’s different about being in Canada versus being a country.

GND: Let’s take a very concrete example. If we wait for Alberta to be ready to do a transition towards a green economy, we will wait a very long time. And the very recent decisions of Justin Trudeau to nationalize a private pipeline project, justifying it by saying that it is in the national interest of Canada, I think pretty much speaks [for] itself. We don’t want a project in which pipelines are considered in the national interest.

RJ: What is your position on the policy of secularism in Quebec? There’s been so much debate and discussion about this. Some people question whether the debate is necessary.

GND: It certainly hasn’t been done in the right way, because we’ve been pretending for years to debate about secularism, when in fact we are debating about something totally different.

GND: I think a lot of people will hate me for saying this, but I think it’s much more of a debate about diversity. In fact, Quebec’s political institutions are secular. There are still [issues like] the fact that the cross is still hanging over the actual place where the laws of Quebec are being voted [on]. We’ve been arguing for years that if you want to symbolically complete the process of secularism, you should get rid of that.

RJ: Other than the cross, do you think that Quebec needs to make specific new laws about minorities or about religious communities and what they can wear?

GND: It is not a priority for Québec solidaire. I think what we should be urgently talking about is the climate change question and the state of our public services, about the rise of income inequality. Those are the pressing issues of our time.

RJ: So you don’t think that there is an issue in Quebec with integration of minorities?

GND: I don’t think it’s an urgent and pressing problem.

RJ: Do you think multiculturalism needs to be handled differently in Quebec than in the rest of Canada?

GND: Quebec has developed a very specific approach to immigration, which is to recognize French, of course, as the common official language language of Quebec. We have found a way in Quebec to balance that with the fact that this is now enriched by people coming from all over the world, putting their own accents, their own colours, their own touch. It’s not my job and I’m not interested in commenting on what happens in Canada.

RJ: How would you define the Quebec identity? Who’s included in that?

GND: I think if you go into public secondary schools in Quebec, the vast majority of young men and women will tell you that they are Quebecois. I think the Quebec identity today is a diverse identity. But there is [such a thing] as Quebec’s identity, and I think it’s totally possible to say that without excluding anyone. We have a vision in which Quebec identity is 50% heritage and 50% project. Quebec’s identity in 2018 [includes the contribution of] the rappers of Montréal Nord every bit as much as Richard Séguin or Richard Desjardins.

RJ: There’s a fairly large populist movement in Quebec that supports the Values Charter and similar proposals. How do you reconcile that with the more open democracy you’re advocating?

GND: The last party who actually started [an] election campaign on that issue lost it: the Parti Québécois in 2014. So I would not say that people in Quebec massively think it’s the pressing issue, but I do think political parties really want it to become the major issue. The Parti Québécois and the Coalition Avenir Quebec have done that in the past. But I think we should not forget the responsibility of the Liberal Party. Who said first that immigration should be the ballot question? Philippe Couillard. He knows that by doing that, he will wake up the debate about immigration, about identity. His own political option will become a lot more attractive for a lot of people by saying, “Come here, I will protect you from those mean Caquistes and Péquistes.” Which is not completely false, but it’s still a very cynical political strategy. They’ve been playing that card for decades.

GND: Positioning themselves as the ultimate party to defend diversity and minorities, when in fact they are doing nothing for them. They’ve cut in integration resources, Francisation, they’ve cut in all public services. And the first persons to suffer from those kinds of neoliberal policies are people who are already marginalized.

RJ: Why should we vote for Québec solidaire instead of a federalist left-wing party like the NDP of Quebec or the Green Party of Quebec?

GND: There are two arguments. A very pragmatic argument is that Québec solidaire has a voice in the National Assembly of Quebec. We’re able to really have a [weight] in the political arena. The other argument is more principled. Québec solidaire is the growing left-wing force in Quebec. We are the party [of- the student movement, the anti-racist movement, the feminist movement in Quebec [and= the community groups movement — the party that I think is able right now to regroup those energies. ■

Election Day is Oct. 1. If you’re still undecided, check out Cult’s election cheat sheet and our coverage of the English-language leaders’ debate, but first please make sure you are currently on the list of electors.

There have been 127,613 known infections of COVID-19 in the city. Here’s how that number breaks down by borough.