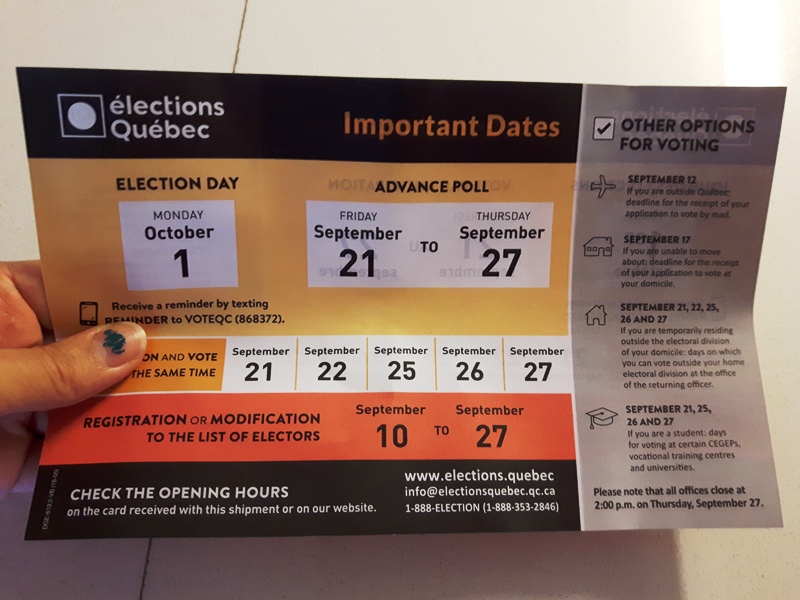 Monday, Oct. 1 is Election Day. Except it’s not. Not really.

There are seven other days other than Oct. 1 during which you can vote/could have voted (some have already passed), so when you think about it there are eight election days. We should really call it Election Week or the Election Period or some such thing, but we are human people and human people generally do not do well with nuance, and so we say that Oct. 1 — the last day your vote can be counted — is Election Day.

This article was originally going to be a “how to go about voting” explainer, but a few minutes ago I found out that I am not on the list of electors. As it stands exactly right now (2:10 p.m. on Sept. 24), I cannot cast a ballot in the provincial election.

As such, I’m writing a different piece than I set out to, because to vote you generally have to be able to vote. In Quebec, this means being on the list of electors. (Though I have lived Montreal for most of my adult life, I moved away for seven years and apparently that’s long enough to get disenfranchised, albeit in a minor and easily-fixable way.)

If you’re on the list, good on ya; check out our election cheat sheet and our review of the English-language debate if you’re still feeling political. If you’re not and wish to be (and are reasonably sure you’re eligible to be), read down.

There are three ways to get on the list of electors or change your entry, but because it is Sept. 24, two of the three ways no longer apply. If you live in Montreal and are eligible to vote but are not currently on the list of electors, you can only remedy this by visiting your local Returning Officer’s office before Sept. 27 at 4 p.m. (To find out where that is, use this tool.) Bring a piece of valid, government-issued identification and proof of your address. A drivers’ license seems like it would be a two-for-one here, but you may want to bring some mail (bills are best) just to be safe.

Also, depending on your situation, you may have alternate recourse. ■

The General Election is on Oct. 1. but you can vote as early as today, Sept. 24. For more information, go to electionsquebec.qc.ca.