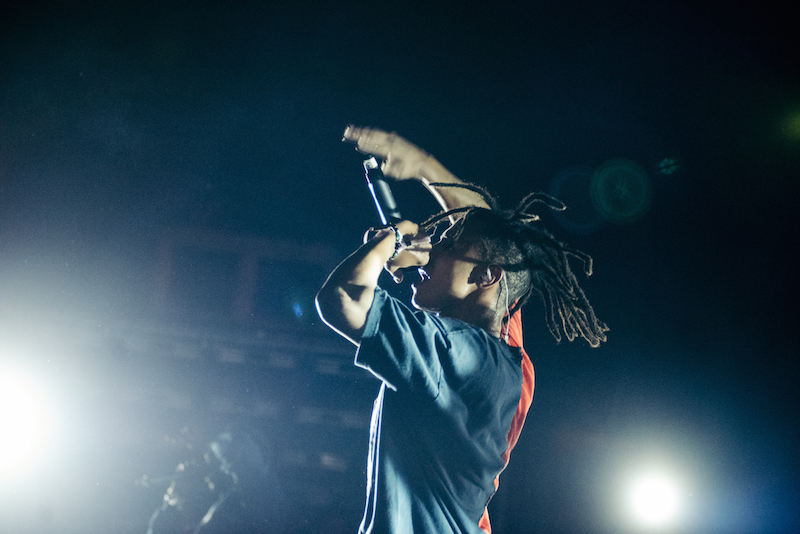 The Festival de musique émergente, which just completed its 16th edition on Sunday, is pretty fucking special. It is probably the best and most singular music festival experience I have ever had.

This, I think, largely has to do with its focus. FME means to be a music festival first and a regional tourism event second and that’s basically it; it isn’t trying to do too much or please too many. That the Missions and Goals section on its site is all of 71 words makes this overwhelmingly clear.

So too does its programming. This year’s FME’s line-up ran the gamut from Alexandra Stréliski, Basia Bulat and Cattle Decapitation to Yonatan Gat and Zach Zoya. Various sub-genres within pop and rock were represented, as per usual, but so were the hip hop, metal, folk, instrumental and electronic worlds. That Saturday night’s triumphant banger of a hip hop showcase (featuring Rouyn-Noranda’s very own Zach Zoya, who absolutely demolished his set) was on the main outdoor stage felt noteworthy; rap and its enthusiasts weren’t an afterthought — Zoya, FouKi and Loud played the same outdoor stage space as did the Brooks (Thursday) and Galaxie (Friday).

Similarly, the festival’s best venue, the Agora des Arts, played host to a bunch of wildly different acts, from Bulat to Hubert Lenoir to Milk & Bone to Karkwatson: the musical Voltron of Patrick Watson (and his band) and Karkwa. 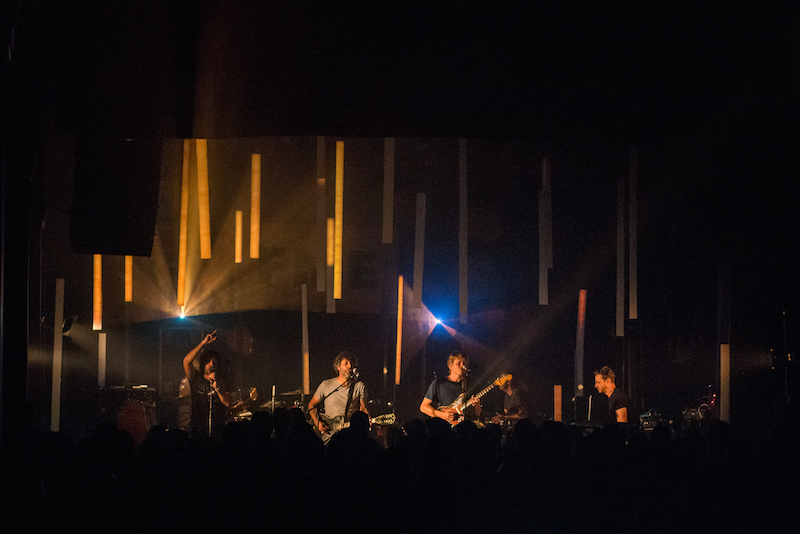 While I’m talking about Karkwatson, playing together again after originating their supergroup a decade prior, the only thing that feels correct to say about their two-hours-and-then-some set at Agora on Friday night is (and was) “wow.” It’s rare to see a nine-piece play at all, let alone play with balance and cohesion. And, while we as audience members were enthralled, the way each player didn’t (couldn’t?) hide their joy suggested they were having more fun than we were. The high point for me was the stripped down singalong version of Watson’s “Into Giants,” but TBH it was all pretty fantastic.

It wasn’t the only set of note. As mentioned, Zach Zoya ruled. Watching a young man born in Rouyn-Noranda play a big show in front of a crowd in Rouyn-Noranda largely comprised of people from Rouyn-Noranda was special. Watch out for Zoya if he’s not yet on your radar for some reason; the Drake comparisons are tired, but kind of apt — check out the one-two punch of “Who Dat” and “Superficial” if you want to know more.

Klaus, comprised of some of the best musicians from some of the best bands in Montreal, was another highlight. Their late-night set at the Cabaret de la Dernière Chance, a gem of a dive bar venue, essentially amounted to a slack-jawed audience basking in the glow of a bunch of geniuses skillfully and effortlessly connecting unconnectable styles and square peg song snippets fitting cleanly into round genre-melding holes. 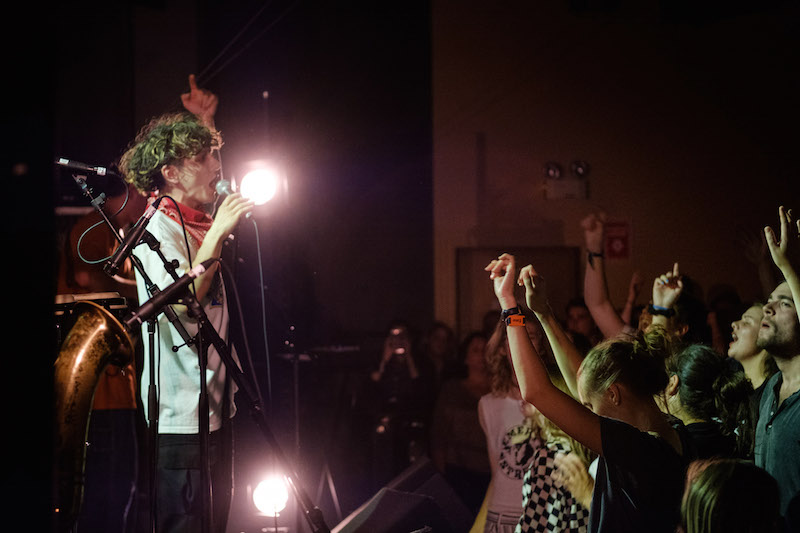 Hubert Lenoir has been among the buzziest names in the province for a while now, and, after seeing his live show on Thursday night, I get why. The kid is a whirling dervish of playful insouciance and wild-eyed desire, a punky Gen-Z glam-rock prince who owned the crowd five seconds into his first song. Towards the end of his statement of a set at Agora, he abandoned the stage, ran through the crowd and up to the balcony, dashed past the people sitting there and to the railing of the balcony as if he was going to shout “I am a golden god!” and jump. Instead, he stood there and assumed a Christ pose to the crowd’s immense satisfaction. Someone was holding him by his belt to ensure he didn’t fall during the pose, but he wriggled away from his guardian shortly after his Billy Crudup moment, jumped the rail and walked along the very narrow ledge gleefully tossing water and beer down at his fans, who seemed delighted by the antics. I can hardly blame them; I was, too.

Charisma isn’t taught, it’s innate. The reason most of the people you’ve ever met don’t have any is because whoever hands that shit out gave it all to Hubert Lenoir.

The best and most mesmerizing thing I saw at FME was Yonatan Gat’s set on Saturday night. Gat, the wildly brilliant avant-garde guitarist formerly of Monotonix, performed a set in two distinct parts. Part one: onstage with a bassist and a drummer; part two: in the middle of the floor alongside his bassist, drummer and the Eastern Medicine Singers, an Algonquin drum group from Providence, Rhode Island whose four members sat around a single drum.

The first part was great; the second part was a fucking fever dream.

The EMS supplied each song’s backbone both vocally and percussively. Gat and his players played around that backbone, and curiously, his prog-psych-punk riffage and endless variations and tangents meshed both peculiarly and perfectly with what the EMS were laying down. To suggest it was a “spiritual” experience would be trite but there was definitely something very curative about watching Gat’s chaotic genius intermingle with the haunting power of the EMS vocals and dramatic drumming. 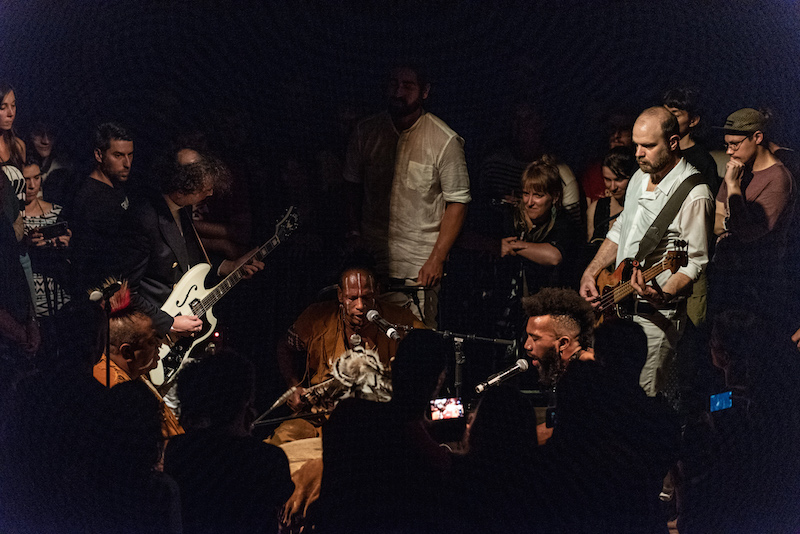 If you’ve never been to FME, part of its charm is located in its layout. Most of the show venues are clustered in and around the same area, near the festival’s two main venues: the Agora des Arts (familiarly known as “the church”) and the Scène Extérieure Desjardins, a short two-minute walk up the street. The largest distance between two venues? Miniscule. When I left the main festival site to walk to Obia le Chef’s set at Salle Paramount it took about 15 minutes. At many in-city festivals this simply isn’t the case, mostly because it can’t be.

Same deal with the costs. I was accredited media, but if I weren’t, I wouldn’t have been out a ton of cash: festival passports were just north of $100 — and that’s for four days. The drinks? Cheaper than any other festival I’ve ever been to in Canada, and everything was 50 cents cheaper if you bought a $3 festival mug, which pretty much everyone did.

How cheap? Sleeman (festival sponsor) cans were $4.50 ($4 with your mug); Aperol Spritzes were $6 ($5.50 with your mug); and Jameson/gingers: $6 ($5.50 with your mug). Bar rail? No sweat. Singles, doubles and triples (!) were $6, $8 and $10, respectively (the same mug discount applied). You could walk your mugs around the city, too, including into local bars (which featured festival-related specials) and pretty well everywhere else. No one cared. I don’t think I saw more than two cop cars all weekend — but I also didn’t see anyone horribly or violently inebriated.

Finally, a word about the people of Rouyn-Noranda.

Pretty much everyone involved with the festival — from the festival braintrust to its myriad volunteers to the town’s countless service workers to its inhabitants — was lovely, kind and accommodating. I can’t remember the last time I saw people en masse treat tourists with such openness and warmth; I also can’t remember the last time I saw crowds so simply and earnestly appreciative of music, either.

Sure, maybe that’s not all due to whatever’s in the water in Rouyn-Noranda, but maybe, just maybe, the town and its festival elicits this kind of decorum from those who would otherwise be boorish.

Maybe everyone read those 71 words and acted accordingly.

It is a truth universally acknowledged that if you bring up a music festival, somebody nearby will stop what they’re doing to inform you how much better that festival used to be. I’ve been on both sides of that conversation. I remember being in my 20s and naively thinking a given thing was good only to have some greybeard tell me that the thing I was actively in the process of physiologically and psychologically enjoying sucked, and lately as a greybeard who says shit like, “Oh, man, you would have loved [festival] back in [year] before it got [pick one of: corporate, popular or expensive].”

Older SXSW attendees are the worst for this.

People who attended the first few Osheagas (I include myself, here) aren’t that much better.

In the three-and-a-half days I spent in Rouyn-Noranda, not one person talked about any other iteration of FME. To do so wasn’t just unimportant, it was incompatible with what they were trying to create. It wasn’t that they didn’t care about the past as much as it was that they didn’t see the point in the comparison; to these people, this shit isn’t about being cool or squeezing every possible buck out of every possible pocket. It’s about making something amazing.

Which is probably exactly how they did it. ■ 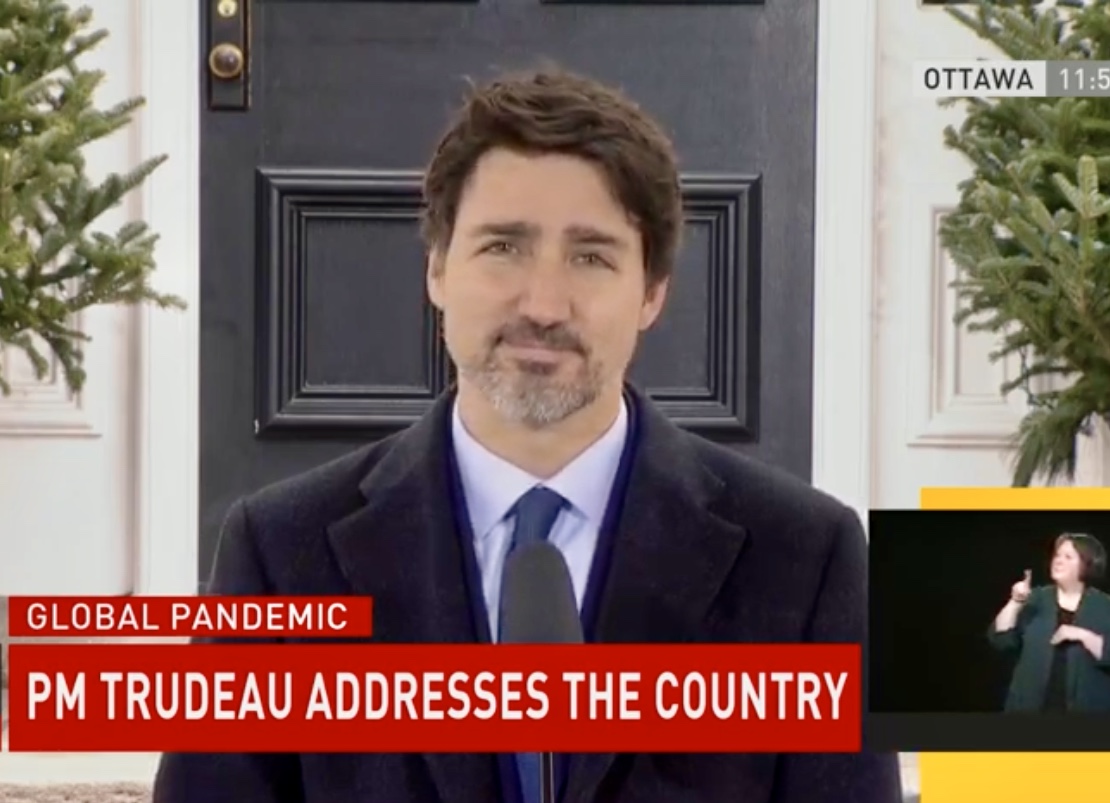