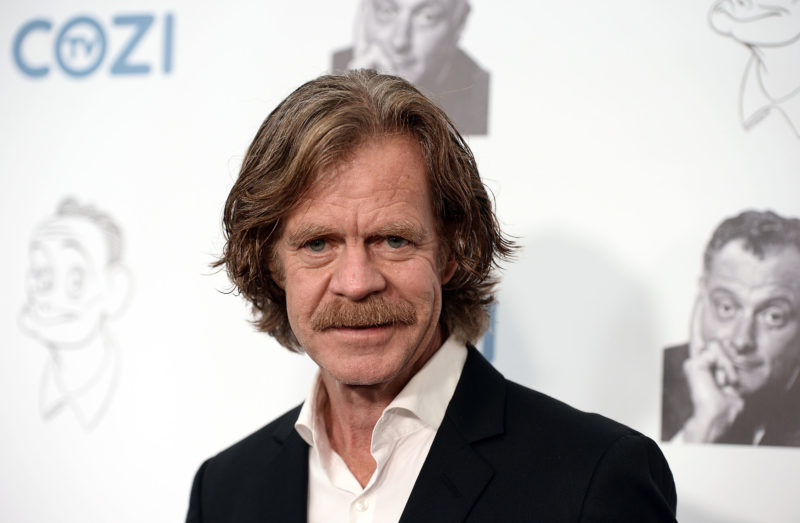 I don’t think I was the only one who browsed the JFL program this year and took pause when I saw that William H. Macy was hosting a gala featuring Piff the Magic Dragon, Josh Blue, Paul Chowdhry, Nile Séguin, Paula Poundstone, Lynne Koplitz, Nathan MacIntosh and Nour Hadidi. While Macy is certainly no stranger to funny parts, his name isn’t necessarily synonymous with stand-up comedy — as it turns out, Macy himself is just as surprised as we are.

“Man, I don’t know!” says Macy, when I asked how he got the job in the first place. “I’m in the deep end of the pool now! I wanted to try it. I love stand-up comedy — I love watching it and I love those men and women. They strike me as the bravest people I’ve ever met, and… I don’t know! I’m gonna have some good writers, and I’m just trusting that I won’t embarrass myself!

“My whole career, I’ve been to all these awards shows and seen the host, and they just strike me as magical, somehow,” he continues. “They seem so at ease — like they belong there! And yet they’re in a room of very nervous people who want to find out what’s going to happen. (laughs). They just seem like the rulers of the universe and I’m hoping I pull it off.”

Macy has been open in his admiration of comedians before. He’s even attended Just for Laughs in the past as he’s shot at least one film (The Wool Cap) in Montreal. “Comedians are a strange bunch, let’s face it,” he says. “I don’t know where they get the material, but I feel like they’re talking to the gods! I’ve always been struck by the fact that the most genius comedians carry around such a heavy burden of sadness. They’re tortured! It’s weird, that juxtaposition of their take on life being at once hysterically funny and yet so dark.”

Macy’s role as the host is purely a gig — he doesn’t write any of the jokes or choose any of the acts — and in fact, he’s only in town for the day of the show, as he’s currently in the midst of shooting the hit Showtime show Shameless. “I’m a hired gun!” he exclaims “There are writers toiling away at it as we speak, so they’ll pitch me some jokes and I’m sure I’ll chip in with whatever jokes I can come up with and, God willing, we’ll get a good script. If there’s a good script, I think that I can pull it off — but there’s always that 10 or 20 per cent ad-lib notion that I see all the great comics do, and that part scares the shit out of me. I won’t lie to you! Everybody has had the experience that you go to the restaurant with all your friends and you’re just on that night: every story you tell is just indelible and everything you think is just knee-slappingly funny. Maybe I’ll have one of those nights!”

In a way, this gig represents a form of exorcism for Macy. Despite being a seasoned actor with decades of experience, stand-up comedy still petrifies him. “I’d rather have the skin flayed from my body than do a stand-up comedy routine!” he laughs. “At the same time as it frightens me so much, it also fascinates me. This is my shot to give it a chance, and the worst thing that’ll happen is I’ll just have to write a bunch of people an apology letter.”

Throughout our conversation, Macy keeps going back to the idea that the show is scripted — that he’s not taking as much of a chance as a “real” comedian. I ask him if he’s considering the job to be just like an acting part in that respect. “What a great question — yes!” he says. “After a fashion, yes. The room is going to have a personality and I will, God willing, recognize the room and what’s going on and be able to adapt to it and get in the groove. I’m sure this ultimate script I will be presented will have a throughline and.. Yes, I will approach it as a role.”

Macy has also taken on a brand new role in recent years, that of director. Though he had directed a TV movie in the ’80s, Macy has become very prolific as a director of indies, making three features in the last four years.

“There’s nothing in an acting career that can prepare you for directing,” says Macy. “They’re apples and oranges. In all candor, one of them’s easy and the other one’s impossible. Acting is easy for me, and maybe that’s because I’ve been doing it for 35 or 40 years, and one of the reasons for that is that it’s very specific. Actors live in the moment, and our purview is about a three-minute period of time. That’s all we’re responsible for. A director, on the other hand, has to keep his or her shit together for the entire pre-production, production and post-production — and that can be a year. I’ve never done anything for a year! And you have to work not in three-minute segments, but work for 12 hours straight on your A-game. You have to be thinking all the time — thinking and planning and watching, and at the same time, you have to let your mind go and think, ‘Okay, it’s not working, how can I fix this?’

“In that sense, I’ve always marvelled at stand-up comedians because, at once, they’re writing, directing and performing. They’re doing all of that, the best of them, simultaneously. I’m in awe of them.” ■