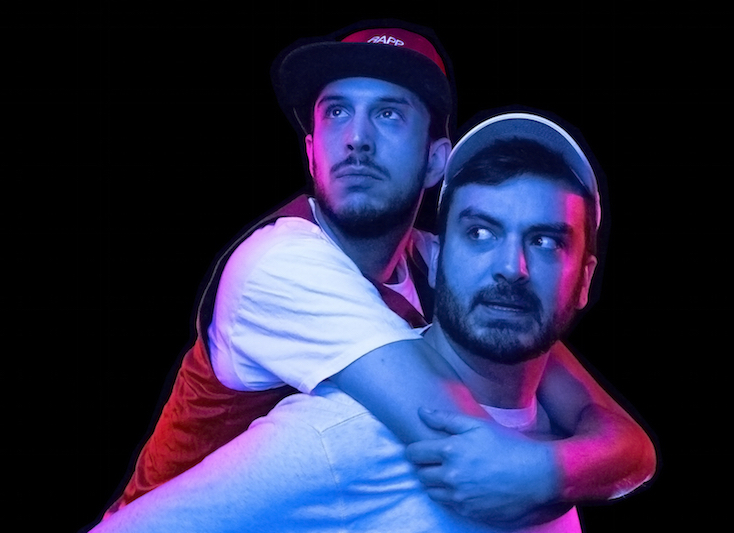 Born in the primordial ooze of the Festival of New Formats at Toronto’s Comedy Bar in 2010, Rapp Battlez bills itself as “the high-energy, strobe-lighting, confetti-tossing comedy party show that’s had audiences getting lit for eight years.”

Thing is, there’s ample evidence this copy is underselling the show.

An irresistible mix of sketch comedy and battle rap à la King of the Dot, Rapp Battlez promises to be a must-see for those who like their laughs with a side of cyphers.

Show co-creators Freddie and Miguel Rivas — whom you may recognize from The Beaverton‘s television adaptation — answered some questions in advance of Rapp Battlez‘ three-show run straddling both Just for Laughs and Off-JFL.

Dave Jaffer: How did this show come to be? Why did you bring this show to New Formats way back when?

Freddie Rivas: Miguel and I started doing sketch in a troupe called Frenzy when we were 17 and 18. A million years ago, in the early days of Comedy Bar in Toronto, we were always looking for new ways to present sketch comedy instead of focusing on actually writing jokes, so when the Festival of New Formats came along, it was kind of the perfect opportunity to try something weird. Miguel wanted to do sketch comedy in the round and that was literally the whole idea. We tried a bunch of stuff, including some character raps I wanted to do at the end.

Miguel Rivas: As soon as we finished that first show, it was like, “Oh, the whole show should just be rap battling.”

DJ: How about a little background on you two. You’re brothers, and you kind of work together in this non-traditional field. When and why did you both go into comedy?

FR: We come from a really funny, tight-knit family and we were poor as hell growing up. There’s actually four of us brothers altogether and we were all class clowns. Our mom raised us by herself and she was always hilarious, so making people laugh was always important to us.

MR: I went to theatre school, and very quickly realized comedy was more for me than theatre. It also hadn’t occurred to me until then that you could just do shows. So I started a sketch troupe with the funniest people I could find in theatre school and Freddie, [who was] still in high school. It was the best!

DJ: Miguel, what are the best and worst things about working with Freddie.

DJ: Freddie, what are the best and worst things about working with Miguel?

DJ: Your show is described as 8 Mile meets WWE meets confetti. If you had to use a different pop cultural way to describe your show, how would that go?

FR: GLOW is a fun comparison to our show. It has wrestling and big characters and all the pageantry that comes with it. You get to see the performances in and out of the ring, which is the type of silly and nuanced comedy we love to showcase.

MR: We’re also giving a nod to real rap battling league King of the Dot. A huge inspiration for us.

DJ: What were the best moments in the history of Rapp Battlez?

FR: Rapp Battlez 100 was a very special night for us. We built a marathon show and just had so much fun watching all of the performers crush it in a new space. Other moments include Marito Antonio Lopez and Aisha Brown lighting it up as Ketchup & Mustard, [which will] be reprised at our Katacombes show; Chris Robinson and Paul Thompson as Christian best friends hurling compliments instead of insults; and Daniel Beirne with Nicole Passmore as Jonathan Taylor Thomas vs. Jonathan Taylor Thomas’s tailor, Thomas Jonathan.

MR: Tom Green once stormed the stage at a show in Ottawa impromptu, and that was huge. We idolized Tom Green growing up.

DJ: My favourite Rapp Battlez rapper is Triple Crown, the rapper preoccupied with becoming a horse. Is he going to make an appearance at Just For Laughs or did you ban him again?

FR: We have banned Triple Crown forever. He only raps about being a horse and he lied to us about that.

MR: Actually, I booked Triple Crown and he has assured me he won’t be rapping about wanting to be a horse! Can’t wait for him to re-establish himself.

DJ: The guy just wants to be a horse, something I think we can all relate to. Can’t you let him live?

MR: I think he plans on doing our Loto-Québec outdoor stage shows, so yeah, I guess we can let him do his thing. But if he raps about horses one more time we have a big problem.

FR: We are not afraid to re-ban Triple Crown.

DJ: You’re likely to be doing the show in front of people who haven’t seen it — or anything like it — before. Any words of encouragement or caution for your crowds?

MR: This will be the most fun show you have ever seen in your life, please come!

DJ: The show was just signed by Don Ferguson Productions. Does this mean Rapp Battlez is going to be a show? A movie? A web-series? A breakfast cereal? An ephemeral social media entertainment product that’ll be the rap/sketch comedy answer to HQ Trivia?

FR: Yes! We are pumped to be with DFP. We hope a show opens, but honestly, we really like all these ideas. Cereal boxes and trivia here we come! Jokes aside, we feel like Rapp Battlez and the playful world we have created has huge appeal and would be gobbled up by audiences. ■