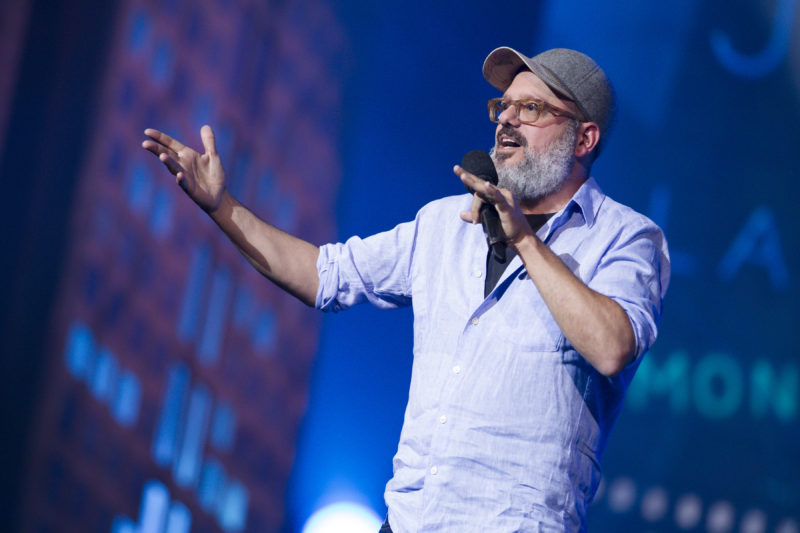 I’m sure David Cross gets it all the time, these days: the world is crazy, the world is a nightmare and I don’t really know where to start talking about any of it. The current political and cultural climate has done a lot for stand-up comedians, but it can also be constricting: what else is there to talk about, when things seem so insane? Cross has certainly never been one to mince words, and yet I’m so burnt out by the constant influx of stuff that I hesitate to even bring it up. I begin by asking him if his job as a stand-up comedian has really changed that much since November 2016.

“It’s not that different while I’m doing the show,” says Cross; he’s calling from Calgary, where he was performing his show Oh, Come On, which he’ll be bringing to Montreal on July 25 as part of Just for Laughs. “I don’t really get into any of the topical, political stuff until about two thirds of the way into the set — the beginning is all goofy stuff and anecdotal stuff — so perhaps there’s a catharsis, but it’s hard to translate into a feeling from the audience. I’ve only done nine or ten shows in the States so far, but I haven’t gotten any disgust or animosity or the outright anger that I experienced last time. Perhaps that’s a combination of the fact that those (angry) folks are staying away from this show, or perhaps it had something to do with the fact that two and a half years ago, it seemed like this big joke, and now it’s not a joke at all. Everything is coming to roost, as it were, and maybe it’s shifted their viewpoints. My show is way different than it was last time — each show is different. (…) Plus, you can’t be on your phone during the show, so that’s an hour and a half off social media, which will do anyone good!”

I bring up that I only really joined Twitter in the last year — a real Johnny Come Lately move that I sometimes regret as I’ve witnessed none of the good parts of the phenomenon and only the shit. “I came to it very late myself, and I didn’t want to get on social media and I did for the last tour, which was literally the only time I got on it,” says Cross. “I understand its value, but it’s just an awful, awful place and I will get off it as soon as this tour is over. It’s really depressing to think that’s how people… it’s just so anti-intellectual and basically antithetical to the way humans should communicate and conduct themselves… I can’t wait to get the fuck off there… and I want to keep my kid off it, too.”

Cross and his wife Amber Tamblyn recently had a daughter, but don’t expect Cross to become a ’90s-style dad comic any time soon. I bring up the fact that, with the nightmare of a year we’re having, I would feel extremely pessimistic about bringing a child into the world.

“I’ve been hearing that since I was a kid,” says Cross. “Granted, things are very different from anything I’ve experienced before, but I truly have heard that since I was a kid, going back to the Vietnam War and shit like that, before I even knew what it meant. Who knows where we’ll be in two, four or six years… but also, you’re in Canada! It’s a much better place to bring up a kid, so I wouldn’t sweat it that much. Have six kids — for Canada’s sake!”

I bring up that the previous week, Tamblyn appeared on Marc Maron’s podcast WTF to promote her book and Maron (who started in comedy with Cross in Boston in the ’80s) seemed incredulously delighted to imagine the caustic Cross as a father. “Yeah,” Cross laughs. “I think so many steps of the way in my life trajectory have seemed beyond comprehension for a number of people. But yes, I have some jokes about being a father. I try to tell people that I’m not going to do an hour of dad jokes — I wouldn’t do that you — but she’s been my focus since she was born. Of course, I’ve made some observations and have some jokes but at the appropriate time, I move on to other subject matter. (laughs) There are jokes that I keep because they’re dark and they make me laugh, but there’s nothing that I don’t do because it’s… oh, actually, there is one joke that I took out because the audience told me not to do it.”

Oh, Come On represents a new experience in Cross’s career in one way — it’s his first stand-up set to be written entirely from scratch. “I’ve never done it before, starting a set from scratch,” he explains. “I booked all these shows in basement rooms and clubs in Brooklyn, and I did that for months and months until I got to bigger places. Once I got past just bringing up a notebook with subject matter in it and riffing on those, once I got the material there and somewhat in shape, I would perform it and then I would ask the audience questions afterwards. ‘What do you think of this? More of this? Put that there? Do that?’ And they were extremely helpful, but there was one joke where everyone was adamant that I shouldn’t do that.”

Coincidentally (or perhaps not so much), Tamblyn will also be in town on the same day promoting her recent novel Any Man at Paragraphe. “This worked out purely coincidentally — for the second time in a row — that she has a book coming out while I’m touring,” says Cross. “She had a book come out just last week, and she’s been going to bookstores and doing readings and such, and that’s what we did on the last tour two years ago. It’s just worked out perfectly — we’re quite lucky, but now we’ve got the kid so it’s me and Amber and a nanny, a tour manager and a driver and we’re headed all over the world… well, America. Well, Canada and the States. Sorry, Mexico.” ■

David Cross performs Oh, Come On as part of Just for Laughs at Olympia (1004 Ste-Catherine E.) on Wednesday, July 25. For tickets, click here.