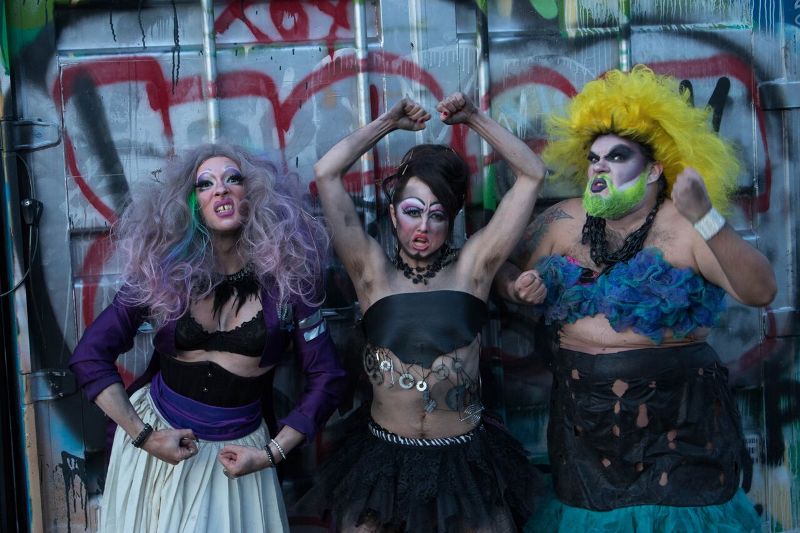 Until June 17, the Plateau will be teeming with independent, often edgy, sometimes experimental theatre, comedy, dance, music and other types of performance art at various venues. To see our Top 10 festival highlights, look here, and read on for our second batch of reviews (see the first batch here) of recurring shows that you can catch this week and next weekend:

I had no idea what to expect from Clickbait, a show chosen more for how conveniently it fit a hole in my schedule than anything else. Five minutes in, I was mentally apologizing to my friend for dragging her to such an awkwardly amateur production, but after another five we found ourselves laughing out loud as the players evidently weren’t taking themselves any more seriously than we were. “So bad, it’s good,” leapt to mind. But the audience laughter wasn’t derisory — we were enjoying the actors’ obvious love for their roles in a rather incomprehensible mish-mash of faux-techno jargon mixed with cheap special effects and rather hilarious physical comedy from two key characters. Refreshingly, unapologetically amateur, Clickbait is better value than a lot of the more earnest productions you’ll see this summer. Go Jerry! (Peter Wheeland) La Chapelle (3700 St-Dominique), June 13, 14, 16, 17, $3

Michael Burgos’s one-man, multiple-persona The Eulogy has been winning Fringe awards from Atlanta to Adelaide and you’ll quickly see why if you get your butt down to Montreal Improv Theatre this week, where the rubber-faced Burgos can send the audience into convulsions with the twitch of an eyebrow. He has a solid set here, but adds a bit of whimsy by riffing with the audience throughout with the quick wit of a stand-up comic that makes every show unique.  Presiding over the funeral for a not-much lamented friend, Burgos morphs into several characters whose tributes to the dearly departed include openly courting his widow while torching the casket. Eminently likeable, Burgos’s comedy style has been compared by several critics to Chaplin, but he has his own inimitable and irreverent style that had the audience laughing even before the house lights came down. (PW) Montreal Improv Theatre A (3697 St-Laurent), June 13, 15, 16, $10/$8 students

This charming all-ages production is billed as French but throws in Spanish and Italian for good measure. No matter, the story is clear in any language as expressed through music, dance and comedy in this engaging tale of an unusual love triangle. Only 30 minutes long, Le Cri is a refreshing break to add to your Fringe binge. (PW) Studio Jean-Valcourt du Conservatoire (4750 Henri-Julien), June 14, 15, 16, $10/$5 students/seniors/LGBTQ+/polyamorous

Dance Side of the Moon

Combining what is “often regarded as one of the greatest albums of all time” — 900 weeks on the Billboard chart — with the physical genius of Montreal dancer Maxine Segalowitz and the imagination of prize-winning choreographer Hélène Simard (No Fun and Idiot), Dance Side of the Moon is already one of the hottest  tickets of the 2018 Fringe. From the moment the A-side begins to spin (yes, actual vinyl!), Segalowitz whirls and crawls and slams and contorts her way across and around the intimate Freestanding Room venue. Acid rock meets twisting sister, Segalowitz/Simard avoid cliché and fill even the quietest moments with subtle seduction. Grab your tickets now to avoid disappointment. (PW) Freestanding Room (4324 St-Laurent), June 13, 14, 15, 16, 17, $10

Stories of Love, Death & a Rabbit

Charles Adrian greets you at the door as Samantha Mann; a polite, middle-aged woman with a prim Oxford accent and staggering eye-contact. Taking the stage, she begins with terrible jokes that are delivered with immeasurable charm and jests that the audience may “tut” latecomers, all the while assuring us that the show will start presently. The show only “begins” halfway through the running time, but it doesn’t really matter as the performance feels more like an intimate conversation. As promised, we are brought through stories of love, death and a close friend’s rabbit currently in her care, each revealing new depths to the woman onstage. The stories of love reveal regrets, the stories of death reveal potent familial love and her discomfort with the rabbit in her home seems to mirror her discomfort with her own timid and fear-filled attributes that have governed her life. It is only when Samantha shares her poetry, a hidden love, that we begin to travel through her revelations with her at an increasing rate. She graciously allows her gentle, morose retrospect to remind us to never let fear deny us of the joys in life, and that it is never too late to find your courage. (Maurena Taylor) At Montreal Improv Theatre A (3697 St-Laurent) on June 14, 15, 16, 17, $10

Apocalipsync: Humanity Is a Drag

House of Laureen presents a speculative fiction of what is to come if the unrelenting left took over the world. Our show opens on a bankrupt, barren nation after the queer community conquered, ballooned and then divided itself. A “divine” narrative goddess, played by the magnetic Peaches Lepage, guides the story as we follow surviving queens Uma Gahd, Dot Dot Dot and Anaconda struggling to find meaning in a world devoid of rules, admirers and plumbing. These three come to represent different pillars of social thought; Uma portrays a self-indulgent social media queen, pining for social divide to affirm their uniqueness. Dot represents a more diplomatic, environmentally conscientious but socially controlling thought group and Ana embodies the complete rejection of social structure, embodying “Ana-archy,” if you will. With strong environmentalist themes and a simple yet effective set, the queens paint the sterile scene that a split left vote could leave us in, peppered with delicious lip syncs. Though all the performances were strong, Peaches definitely steals the show with an otherworldly stage presence and a look complete with hilariously small mechanical arms. Don’t miss your chance to vote on humanity’s next “Brave New Girl.” (MT) Théâtre Sainte Catherine (264 Ste-Catherine E.) on June 14, 15, 16, 17, $10

Glitter Confetti’s $elf Made $lut might be best described as theatrical naturalism for the information age. We join “Janie” — a mother, a single woman and an online sex worker in her bedroom — as a fly on the wall during her evening of work. This time she is joined by an unseen journalist who she guides through her process and who prompts her with unvoiced questions about the field. With light humour, the emergence of a sex-positive support group and some exploration of certain perverse sexual fantasies, this one-woman performance is funny and informative. Unfortunately, it relies heavily on the sounds of automated messaging and voiceover to move the narrative of the play forward. Though these do well to depict a realistic portrait of the nature of this work, it creates a challenge for the performer to keep the audience visually engaged while someone is frequently reading and writing texts onstage. When Janie’s everyday world and her online career collide, the play becomes a fascinating exploration of the double standards placed on professionals in this rapidly changing industry, but only in the last leg of the show.  (MT) Montreal Improv Theatre B (3713 St-Laurent #202) on June 12, 13, 15, 16, $10

If your initial thought is that this is a strange premise for a Fringe show, you would be correct, but it was also what made Tarot Live! so refreshing. Our intuitive interpreter, Jesse Strong, is a soothing presence guiding us through the cosmos in a glittering dinner jacket. Self-aware and gently self-effacing, Jesse is apprehensive about the unconventional nature of their production but desired to experiment with a live group setting. For all the brave souls who volunteered to explore their hopes, fears and dreams onstage, Jesse requested that the audience apply these questions to their lives, using our theme card of Courage to consider where we may be allowing fear to govern our actions. What resulted was a show that not only educated the audience about Jesse’s craft but also reminded us of the fascinating, complex and loving network of human beings that surround us every day. As this is one of the overarching aims of live performance, I certainly hope this is a continued venture for the producers, as 45 minutes almost didn’t seem like enough! (MT) MainLine Theatre (3997 St-Laurent), June 13, 15, 16, $10

Portland, Oregon sketch comedian DK Reinemer’s one-man Fringe show Becoming Magic Mike is an uproariously funny, fast-paced and action-packed piece of rock-solid gold entertainment that is definitely not about dick. Borrowing the premise of a young, well-built man introduced to the world of stripping from the titular 2012 Channing Tatum film, Reinemer flips the script enough to change the protagonist into a cop chasing a case (because making fun of cops makes everything better) and switching between several different characters with a flip of his hat (or pants) straight into the very enthusiastic crowd.

Reinemer keeps the laughs coming hard and fast through playing up character tropes, musical interludes, daring acrobatics, improvised audience participation and, of course, plenty of strip numbers, all of which are joyfully dived into from a springboard of silly film references. If you’re looking for an incredibly fun way to spend an hour, go laugh your ass off while DK Reinemer takes his pants off!  (Lisa Sproull) Petit Campus (57 Prince-Arthur E.), June 13, 16, 17, $10

Red Bastard: Lie With Me

An interactive unpacking of the rules of love, lies and jealousy, performed by one of the most consistently funny and engaging performers on the Fringe circuit, Red Bastard: Lie With Me is well worth your time (especially if you think you’re not a liar). Sit as close to the front as you can, and be assured that while the piece depends entirely on audience interaction, most of it is low-grade, and is done with things like consent and respect in mind. To the best of my recollection, it’s been at least five years since Red Bastard, a self-described comedy monster and bouffon clown, has been at the Montreal Fringe, and he only has four shows left before moving on to Ottawa, so get your tickets early — speaking as a Fringe lifer, any Red Bastard show is the kind of thing that you’ll still remember years later, and that will inspire serious FOMO whenever you see his name listed in a program. (Kristi Kouchakji) La Chapelle (3700 St-Dominique), June 12, 13, 14, 15, 16, $10 (NB: This venue is accessed by one short flight of stairs)