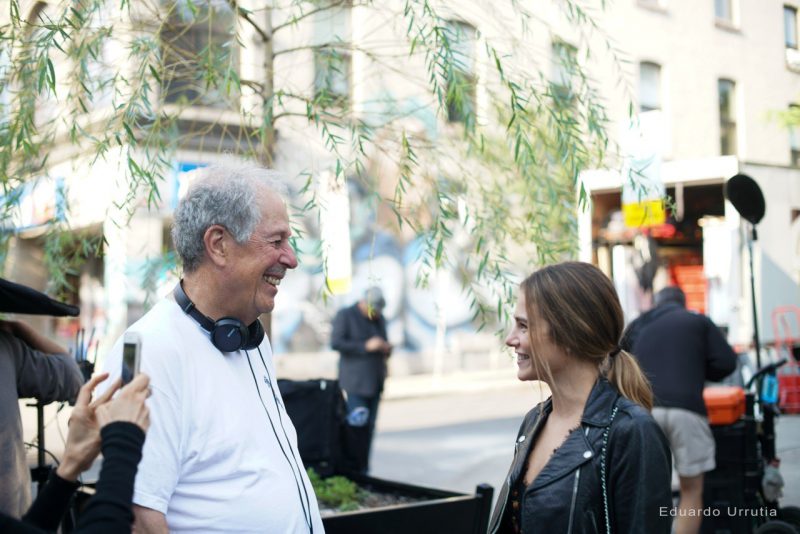 For those of us who have grown accustomed to Denys Arcand the celebrated director of prestigious films like Les invasions barbares, his new movie may seem like a departure. La chute de l’empire américain is a genre film, a heist film with the patsy, the femme fatale, the fence, the dogged cops — the whole shebang. But Arcand’s no stranger to genre films – he just hasn’t made one in a while. Like his early works La maudite galette, Réjeanne Padovani and Gina, La chute… combines Arcand’s penchant for scathing, all-encompassing takedowns of modern culture with prurient, genre-based cinematic obsessions. As it turns out, it was a long time coming.

“It was a great pleasure to get back to that,” says Arcand. “I wanted to make that kind of movie, especially a movie that wasn’t a co-production with France. It was very freeing to… well, to be able to write in joual, for example. (And) having characters like Remy’s, which I couldn’t have in my previous films because the French producers didn’t understand what he was saying. They’d ask for subtitles or cast a certain number of actors from France — it’s a real constraint when working in co-production. This time, I went back to making a fully Québécois film, with Québécois money, about a Québécois subject that the Québécois understand. When I have a character in the film who’s a radiologist hiding $5-million in an account in Liechtenstein, everyone knows who I’m talking about! (laughs) Co-production doesn’t allow us to do that.

“And it’s good to have the cops-and-robbers stuff in a movie because it means the viewer always has something to cling to,” he continues. “You have to follow the money. You have to know where the cops are, what the cops know, how close they are to getting caught… in editing, it makes the structure easier to follow. (…) It’s like tragedy — following the rules of tragedy sometimes frees you up more than not having any rules at all. We can complain about rules, but they impose a sort of rigour that I find very enjoyable.”

Pierre-Paul (Alexandre Landry) is a 30-something intellectual who, despite a phD in philosophy, finds himself working as a delivery truck driver. His intelligence and ethical goodness, in his mind, have prevented him from finding true success — the kind of success that can only be achieved by the amoral, venal and stupid. While completing a delivery one day, Pierre-Paul walks in on a botched robbery attempt that has left several dead and no witnesses. Pierre-Paul loads two hockey bags full of money into his truck, gives the cops (Louis Morissette and Maxim Roy) his statement and drives home, suddenly a multi-millionaire. He enlists the help of a recently paroled biker accountant (Rémy Girard) to help him with the money and soon finds himself flanked by Montreal’s most expensive escort, Aspasie (Maripier Morin) — but the money is wanted by both the West End Gang and the Haitian ganglord (stand-up comedian Eddy King) from whom it was stolen.

Despite that pulpy set-up, La chute… actually has pretty heavy ideas on its mind – from the role of money and its venal influences on all aspects of society to tax havens, homelessness and the ethics of sex work. In typical Arcand fashion, one scene could contain characters quoting Greek philosophers and getting shot in the head, right next to each other. Arcand is adamant, however: La chute… is not a message movie.

“There’s an old Hollywood proverb that says ‘If you have a message, call Western Union’,” Arcand laughs. “Cinema isn’t for conveying messages. Messages are for letters, they’re for public speaking. Cinema is storytelling above all. You can hope that the story you’re telling means something to the people watching them — make them think, make them laugh — but we make movies for… well, I don’t know if pleasure is the right word. I can’t really do anything else. I made my first movie at 21 and I’m 77 now — this is all I’ve ever done! That’s what I do with my life — how I paid my house, how I raised my daughter — and how I live it. What I want to do is make interesting films that people want to see. It could be for all kinds of reasons, but I often make the kinds of movies I want to see.

“I wanted to see a movie where the robber was unarguably the good guy,” he continues. “And I wanted him to win. I had never seen that — a movie where the police come in second. They’re always a step behind the money. It was a real pleasure for me to make that kind of film. Of course, during the movie, I explore my opinions, my tastes, my beliefs… For example, I’ve had enough of hearing that prostitution is just poor, broken-down women in Hochelaga who are pimped out by guys in Montréal-Nord and shoot up heroin every day. Fine. That exists.

“But it’s also the easiest aspect to grasp and the easiest aspect to access when you’re a journalist, because they’re around. They’re on the street — you can go up to them and talk to them. Escorts who work out of the Four Seasons — you don’t see them, they don’t see you and they’re certainly not going to talk about their job with you. But they exist. They’re there, and they make hundreds of thousands of dollars a year, and they don’t want you to know. The only way around that is to create a character like Maripier’s and show the world: she doesn’t shoot up, she doesn’t have a pimp… and that’s something that you don’t often seen in the media.” 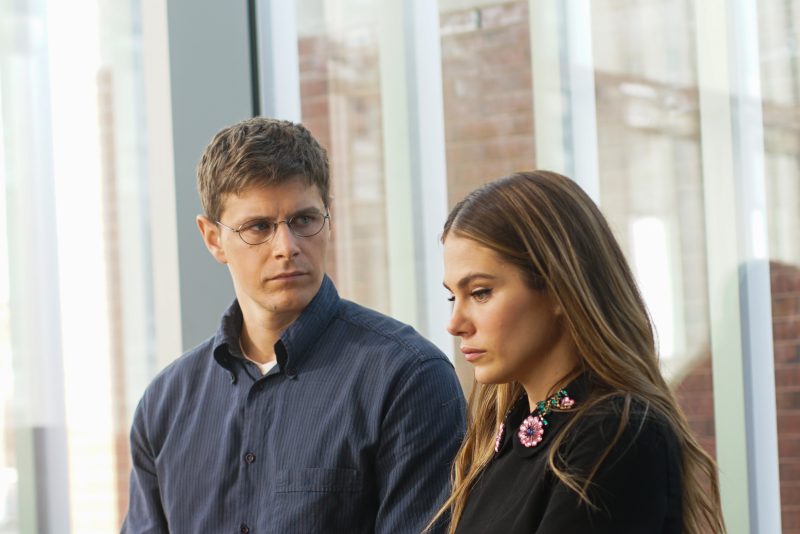 “When I read the script, I found it honestly a little bit inaccessible,” says Vincent Leclerc, who plays a pious homeless man that Pierre-Paul befriends on his way back from work every day. “Maybe that’s just me. But the movie I saw on-screen wasn’t the movie I read. It’s a much funnier film than I expected. I also originally read it as a movie about tax havens and about aggressive, savage capitalism. The movie that I saw was about the class struggle, which was a great surprise for me.”

One of the themes that develops throughout the film is homelessness, a topic that Arcand had already explored once in his 1996 film Joyeux Calvaire. (Gaston Lepage and Benoît Brière, that film’s leads, reprise their roles here.) Though the themes were there from the start, Arcand explained in a press conference that the shoot revealed more than he anticipated. The film even integrates documentary footage that was shot as they filmed in downtown Montreal.

“When I was a kid, I was extremely thrifty,” says Morin. “I would get an allowance from chores and I’d just save up all the money. The only thing I’d use my money for was to buy presents at Christmas and for birthdays. Every summer we’d come to Montreal for a week and I’d bring — I was maybe seven or eight — I would have $150, $200. Lots of cash! I would get in the metro and give all my money to homeless people and buskers. My mom would say, ‘Why don’t you keep a little? You wanted to buy some clothes!’ and I would say, ‘Oh, I don’t need it! I have what I need!’ In Rivière-du-Loup, we didn’t have any homeless people or street musicians, and it really affected me.”

Arcand is also adamant that it’s one of his least cynical films, something that not everyone in the cast agrees on.

“I still see a lot of Denys’s cynicism in the film,” says Morissette. “The main character does exist within the system.”

“It is more or less about profiting from a crime,” says Pierre Curzi, who plays a fatcat banker that gets roped into the money laundering proceedings by Aspasie. “But the difference is that they didn’t screw the little guy to get the money. They found it. And that’s the fictional part of it: that doesn’t happen in life. No one finds two bags full of money. The reality is that people are accumulating bags of money and placing it in foreign countries and selling pharmacies or who knows what else in order to get that dirty money. The film doesn’t cast a moral judgment on money, but in my personal experience… I hate money. I hate it. I hate possessing things. In a way, it’s his first Marxist movie! That’s the cynicism: he’s saying no one gets away from capital.”

Money, of course, is a central theme in the film: how it corrupts those who have it and those who want it, but also the ripple effect large amounts of money have on your immediate surroundings.

“I was talking to someone who’s in the criminal world, and he was talking about some problem he had,” says King. “And in the space of a couple of sentences, he presented himself as an economist, as a chemist, as a pharmacist, as a lawyer… you know what I’m saying? Why so much trouble when you could just get a business degree or become a lawyer and do the same thing legally? All it does is confirm to me that if you take shortcuts, then your life will probably be cut short, too.”

“I’ve never been that preoccupied by money,” says Florence Longpré, who plays Pierre-Paul’s bank-teller ex in the film. “Of course, I’m an actor, so I’ve spent three quarters of my adult life poor! (laughs) You never think about it unless you have enough. You never think of what you’ll do with it or what you’ll invest it in if you don’t have any. It only really becomes morally complex when there’s a lot of money involved.”

“Money’s nothing,” says Patrick Emmanuel Abellard, who plays one of the two criminals pulling the initial hold-up and ends up surviving the shoot-out. “It’s like wood. It’s produce. You put a value on it. As human beings, we complicate everything. We create it. Money has nothing to do with anything. It’s who you are and what you want to be that matters. Human beings create situations. Money and guns don’t create situations.”

“My mother used to say “No, money doesn’t buy happiness — but it makes misery much more comfortable!” says Girard. ■

The Fall of the American Empire opens in theatres on Thursday, June 28. Watch the trailer here: