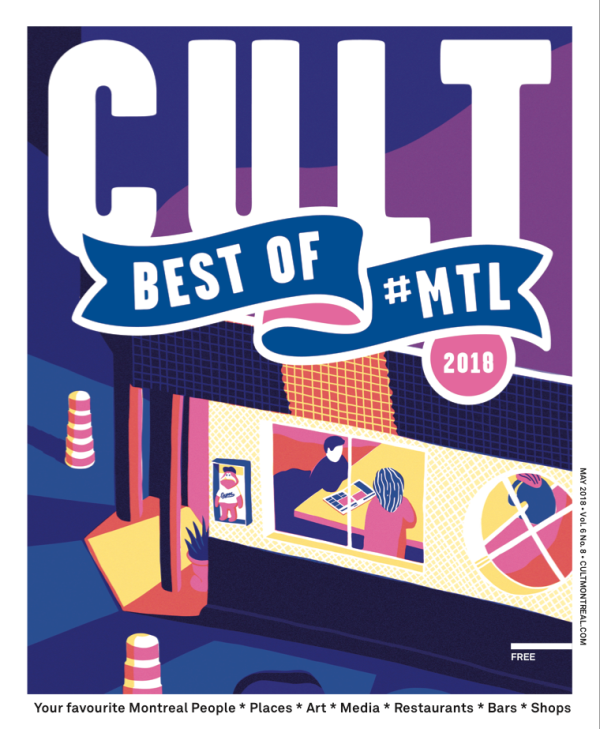 And the city has spoken.

From mid-February to mid-April, Cult MTL readers and other Montrealers of all stripes voted for their favourite local things in the sixth annual edition of the Best of MTL. Our survey follows in the decades-old tradition established by the city’s defunct but fondly remembered alt-weekly newspaper the Mirror. Respect.

Between the scourge of strip-mall living and the permanent construction-site state of our city streets — not to mention the online-living and general bubble-dwelling that keeps us apart — it’s imperative to salute the artists, promoters, organizers, reporters, restaurateurs and retailers who keep Montreal’s heart beating.

The poll is open and democratic, with no editorial influence or interference. We are always glad to see so many people make an event of voting via social media campaigns, and while we can’t resist sharing the occasional third-party get-out-the-vote tweet, we otherwise remain neutral during the polling period.

Ballot-stuffing is automatically weeded out by our survey software, but we must admit that we appreciate joke votes — it’s nice to get a few laughs in during the painstaking tabulation process. This year there were votes for musician/chef Beaver Sheppard, comedian John St-Godard and our columnist Jonathan Cummins in way too many categories, along with less funny social commentary that feels particularly timely — cracks like “Whoever’s not a sexual predator, amirite?” (that one appeared in the Best Club DJ) reveal our readers’ preoccupations.

There were fewer complaints from the politically correct set this year, perhaps because we chose to consolidate some categories (Hottest Montreal Man and Hottest Montreal Woman as well as Best Actor and Best Actress) in the interest of gender neutrality.

We thank everyone who voted and promoted the poll. Participation continues to grow every year, making the 2018 results more representative of the city than ever.

To all the winners in the following 150+ categories: congratulations.

The Mayor also confirmed that the Hate Crimes unit of the SPVM are investigating the incident.

Pre-sale tickets are already available for the Just for Laughs event at Olympia.