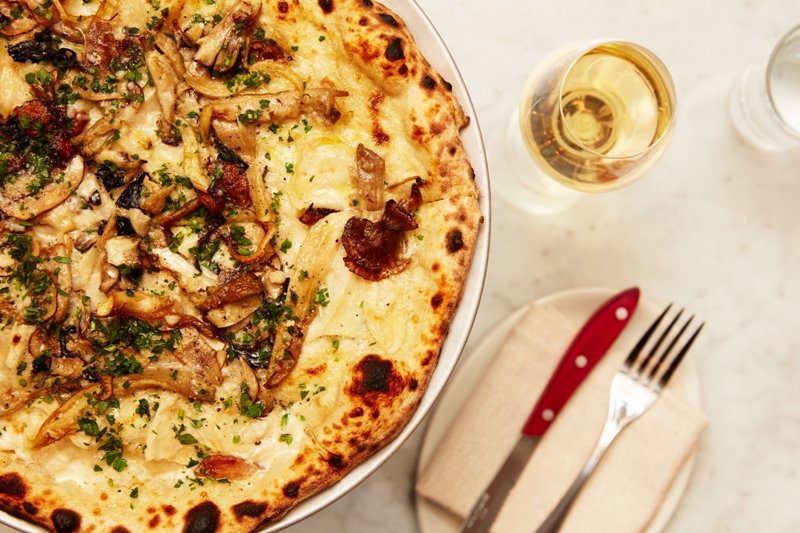 Carved from a space that used to house an old bar, it’d been empty for 15 years. Even post-reno, with blinds drawn on this squat brick building, you wouldn’t know it was there. It’s sort of a psst, party’s in here vibe that’s carried over from its owners’ previous ventures: Emma Cardarelli and Ryan Gray’s Nora Gray and Marley Sniatowsky’s Loïc. There’s that continuity, as well as being a conflux of the former’s highly lauded Italian fare and the latter’s penchant for wine lists as long as your arm. The time-honoured traditions of booze and gluten are hard to break.

My friends and I were well taken care of when showing up for a late meal. While waiting half an hour past our reservation, we made hungry faces at diners who opted for extra courses. I wasn’t by any means frustrated, as many just-opened eateries can be victims of the public’s hype, and those diners’ extra orders could only mean the wait was worth it. Clearly, no one was in a rush to leave.

The front and back of the house were kind enough to send us drinks and snacks for the trouble. Glasses of spumante and the supplì al telefono ($9), rice croquettes with parm shavings on a ladleful of marinara, made for a playful precursor to the rest of the night. It’s a roman street food that takes its name from how, when pulled apart, a string of cheese that resembles an old telephone emerges. 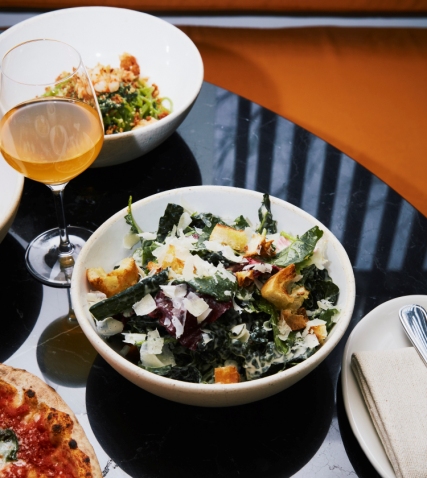 The wait had given my group and I enough time to look over the menu and admire the work of designer Kyle Adams Goforth. The callback to pizza comes through in the design of this 70-ish-seater styled after Italian Modernism, from the large woven disc of deep blue yawn on the wall to the globular lights and curvaceous bar.

We started by tucking into a few more snacks: the gnocco fritto ($13), clams oregonata ($16) and verde salad ($9). The gnocco, a thin bread that puffs when fried, was served with buttery salumi and pickled eggplant that proved to be the most underwhelming dish of the night; good sides with the bread, but the praise stops there. The salad was a crisp mix that fared better, but the clams stole the first act. Baked open faced with breadcrumbs, these buttery bites were quickly sucked back.

These were followed by the spaghetti verde ($18) and margherita pizza ($14), both of which easily topped everything that came before. The spaghetti was silken and flavourful, with the salt of its guanciale and shrimp balancing out the mineral spinach. As for the pizza, Elena’s employed a wood-fired oven that gives their Neapolitan pizza the signature airy crust, with a dough that was none too heavy. Purists would be pleased, and I’ll certainly try their other variations on future visits. And for the bombastic finale, the wood-fired half-rabbit ($37) was a dish of caramelized meat with a hint of smoke laid on top of creamy polenta and white and wood mushrooms. Wonderfully finger-licking good.

Even with all these dishes, a group of four made quick work of them. There’s a word in Italian — abbiocco — for the food coma that follows a big meal. To achieve that at Elena with a similarly sized group, expect to order the whole gamut. But who ever said that would be the worst thing to do on a night out? Mangia, mangia! ■