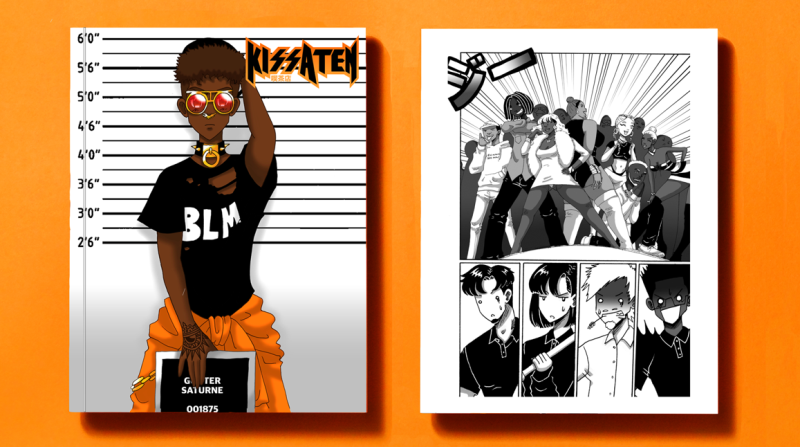 Imagine this: you are in a mundane, minimum-wage job dealing day in, day out with consuming boredom. You have two choices: you either cry or quit. However, Gandhi Delsoin, an emerging Haitian comic book artist living in Montreal, found a third alternative: he created a dark, satirical graphic novel called Kissaten (Japanese for “tea shop”) from richly ludicrous anecdotes extracted out of his workdays at a corporate coffee shop.

Demsley Simon: What is Kissaten about?

Gandhi Delsoin: Kissaten is about a 20-something artist named Günter Julius Saturne, who goes to Bridge City to pursue his dreams. The story follows him through weird, dangerous, fucked-up situations like raves, deadly competitions, a lot of life-and-death stuff. It ridicules the bureaucracies of a corporation and the shady things entertainment people do and say, that doesn’t get talked about much.

GD: It kinda started from boredom (laughs). It really was gonna be nothing more than a short story about Günter participating in some sort of deadly Starbucks-alike reality show competition. But as days passed by, my mind was so full of ideas and I was just getting more and more inspired by everything happening to me.

DS: What is the relationship between the main character and yourself?

GD: I wanted to create a protagonist that was a young black man who isn’t a cliché of masculinity — someone relatable to people like me. I always connected to female characters ‘cause of the way they feel and react to things. I think it’s refreshing to have a male lead who is not afraid to appear emotional. I’m actually quite attached to Günter, not only because he’s inspired from myself, but he’s basically a more upfront, daring, cockier version of me.

DS: Why have you chosen to tackle racism in the series?

GD: How can I not?! As a black man, it’s honestly impossible to live one day without being reminded that you’re black, so it would be weird not to highlight such an important aspect of the black identity. Racism is often talked about, but internalized racism is not — which is basically an offshoot of systemic racism that instigates racism towards one’s own identity and ethnicity. It’s pretty complicated and I would need more time to explain the intricacies of how colonial oppressors’ racist behaviours have traumatized and molded internalized racism not just for my ancestors, but also my own generation and likely future generations to come. I have encountered situations of internal and external racism on multiple occasions and it’s a toxic behaviour that needs to be eliminated.

DS: Why use comedy to address racism?

GD: As someone who jokes a lot, I believe humour is the best way I can present such a touchy subject. Making it laughable is a better way to digest taboo subjects and confront the realities of racism without being overtly aggressive.

DS: What are your sources of inspiration for Kissaten?

GD: Definitely my life! I like to twist or reinvent situations I lived or hear from other people and make them even more exaggerated to the point of ridiculousness. I’m influenced by shows like The Simpsons for the iconic references they always make, Archer for the hilarious sarcasm and punchlines and Bojack Horseman for the dark depth-side of the show.

DS: How did you cultivate your art style?

DS: Why did you decide to self-publish?

GS: I got rejected for a different project back in 2012 and it got me very bitter about publishing houses. I discovered that publishing houses were extremely controlling of their artists’ work to the point that the art itself didn’t even belong to the artist anymore. The work only follows the publishing house’s vision. Self-publishing is hard, but to me it’s worth doing it to have 100 per cent creative control over my projects. ■

You can find Gandhi Delsoin’s Kissaten here. A new installment, Chapter 3: Nakamas N the Hood will be released on Feb. 7.