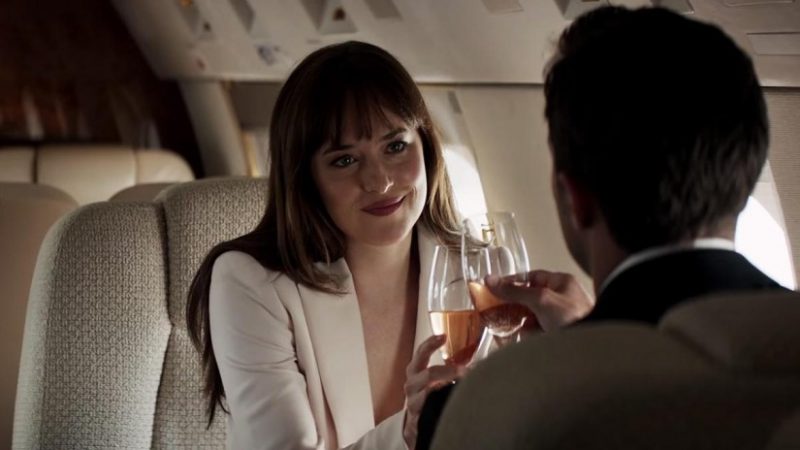 If you are not all caught up in the Fifty Shades of Grey universe, Anastasia Steele (Dakota Johnson) met and fell in love with aloof billionaire Christian Grey (Jamie Dornan), who has unconventional desires — he has a red pleasure room, where he indulges in his S&M wet dreams with willing submissives. He doesn’t believe in romantic love, but virgin-turned-sexual-enthusiast Ana melts his heart and wins him over. In Fifty Shades Darker, he finally proposes and they are set to be married. There are fireworks, everyone is happy, except Ana’s old boss (Eric Johnson), a guy who is into legit sexual assault and sexual blackmail. He is very upset and pretty devious; you just know that this isn’t the last time we’re going to be hearing from him.

Fifty Shades Freed jumps right into marriage. As the credits roll, we get a lot of close-ups of Ana’s beautiful lace wedding dress hanging delicately off her shoulders. From the beginning, we are plunged into a sensual sartorial experience. Clothing serves more than just supporting the film’s hashtag lifestyle brand of the rich and famous; it also consistently serves character and story. Over the course of the whole franchise, Ana’s clothing choices have reflected both her changing taste but also her political power. What she wears, when and why, have also been a reflection of the control she has over her sexual autonomy.

From wedding bells to the beach, Ana and Christian go on a glamorous vacation in Europe. At one topless beach, Ana wants to join the other women without tops, but Christian won’t allow it. In one of my favourite lines of the whole film, delivered with awkward confidence by national erotic treasure Dakota Johnson, she gestures towards the beach saying, it’s just more “boobs in boobland.” He doesn’t acquiesce, but as soon as he’s out of sight, she slips off her yellow bikini and frees the nipple. She is of course playfully and consensually punished after (they now have safe words!), before they are dragged back to Seattle because the bad boss set off a bomb in Grey Headquarters. Oh no!

The rest of the film balances an absurd thriller involving kidnapping, bombs and police with the pains of early marriage. In spite of Christian being, like, totally better but still seriously in need of therapy, he is not so good at empathizing with his new wife who, like, wants to have power over her choices and workplace. Yet, in his defense, he has become enamoured rather than threatened by Ana’s increased ability to seize control of a room or a conversation. Their romance has shifted from awkward experiences where power was guessed at rather than spoken about, into something light and silly. While Christian still has moments where he tries to use sex as a weapon, he has come to realize that having a sexual partner who is really into the same things as you is a whole lot more fun than a submissive who is mostly just interested in the fact that he is a billionaire with a pretty, symmetrical face.

This film has by far the best sex scenes in the franchise, but they still suffer from the same mishaps as the previous ones. With each sexual encounter edited to a steamy pop song, they often come off more like a music video tie-in than a real movie scene. The wildly successful franchise, banking successfully on the fact that women are starved for representation of their own sexual fantasies, ultimately fails at portraying real intimacy. Perhaps intimacy does not really have a place in mainstream cinema. How often do blockbusters achieve that sense of realness in terms of sex, or even any interpersonal relationships, that foregoes illusion? Rarely, if ever. The truth is, the franchise succeeds by keeping us at a comfortable distance, allowing us to fill in the gaps and to revel in the clean beauty of soft-focused bodies gyrating to some AM radio hit. Real sex would make us uncomfortable and doesn’t necessarily translate to a blockbuster hit.

The final act, focused on a big argument between Ana and Christian, with some kidnapping drama thrown in, drags down some of the better moments of the rest of the film. While the first half has Jamie Dornan singing Elton John softly out of key, the second half has stalled non-conversations over cell phones. Of course, this franchise thrives on drama as much as it does on sex fantasies, but in terms of quality writing, they are not on the same playing field. Also, like the montage-heavy sex scenes, the film’s final minutes end with a really bizarre montage of the previous films that just feels wrong in the context of a real movie.

While it likely goes without saying that Fifty Shades of Grey is not for everyone, even at their most frustrating, the films are fun, indulgent and sensual. Dakota Johnson is one of the most watchable actors in Hollywood today, hitting many of the same beats that end up leading Kristen Stewart down the path of arthouse star. The movies themselves reveal the potential for more female-centric sex fantasies, perhaps ones rooted in better writing and fewer conventional tropes. While in many ways Fifty Shades Freed is an Instagram lifestyle brand come to life, it has moments of poetry and tension that set it apart from your regular blockbuster fare. ■