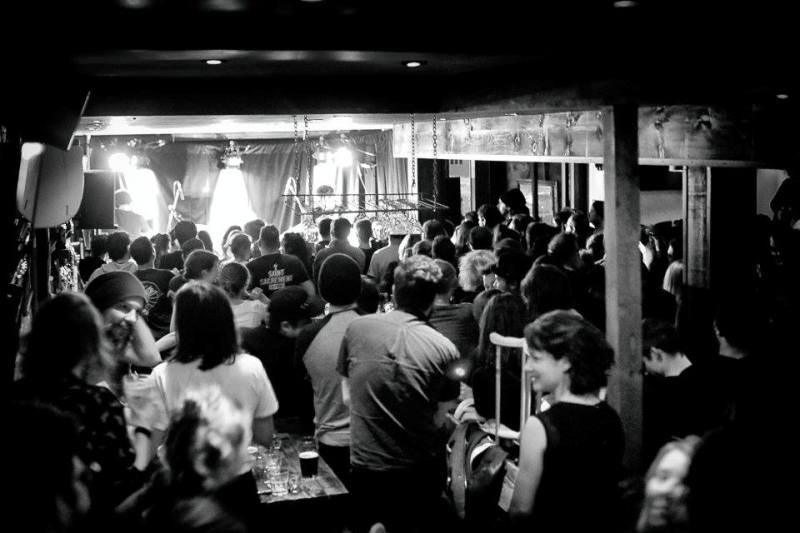 Having worked as a promoter for 12 years, Marilyne Lacombe is a master of the craft. Besides her eclectic network of bands and artists, Lacombe offers a multifaceted experience every time she books a new event. Whether it be throwing down a noise show in a church with her Distorsion Psych fest, or building her own stage in a bar that doesn’t typically see bands, Lacombe sees opportunity where others don’t, making each event a night to remember.

This month’s Taverne Tour, which she co-founded, is no exception, offering unique combinations of artists in small neighbourhood bars.

“The relationship between the artists and the public is very important,” Lacombe emphasizes. “As opposed to a really big, impersonal festival, we take bands that are used to playing in front of a lot more people and put them in smaller venues in a bit of a weird set-up and that creates the spirit of the event.”

Also tied to the community spirit is the lack of ego. The poster for the event is entirely non-hierarchical and even the big cats from New York are down for the chance to play a smaller stage.

“A Place to Bury Strangers is going to play l’Escogriffe,” Lacombe mentions. “When I announced that everybody was like, ‘Are you out of you mind?!’ You know, keeping to the idea of doing smaller shows, keeping contact with your public.  The thing that a small venue does is give a chance for smaller, less mentioned bands to have a voice, but also we send them bigger bands that we know they can receive and it kind of gets those bands to go back to their roots where everything started.”

Although non-venues seem to be Lacombe’s favourite, citing the closing of Divan Orange and the tough competition of the summer festival months, she notes how important it is to offer support to dedicated small spaces. “From just doing shows in weird spaces, we came to including those small venues because for me they’re part of the scene.”

Being familiar with the networks within the Montreal scene, Lacombe also knows how to combine locals in new ways.  Saturday sees a sensible bill of franco-dance from Xarah Dion and Paupière, but similar genres don’t always yield similar networks.

“Each artist has their little network and you see them playing with the same bands pretty often so we try to break those roles and come up with line-ups that were not necessarily natural but make sense.  Xarah Dion is doing really well on the anglo side and Paupière on the franco side and I think putting them together is going to mix the crowd a bit.”

The fest promises to be warm, rowdy and one of a kind. I’ll leave you to Lacombe’s top suggestions:

“We Have Space Face coming from Memphis in a van.  [They’re] the project from Jake Ingalls from the Flaming Lips so he brings that whole theatrical show set-up but on a smaller scale.”

“A Place to Bury Strangers, probably the show of the year for me.”

The Taverne Tour runs from Jan. 31 to Feb. 3. See the festival’s website for the program.