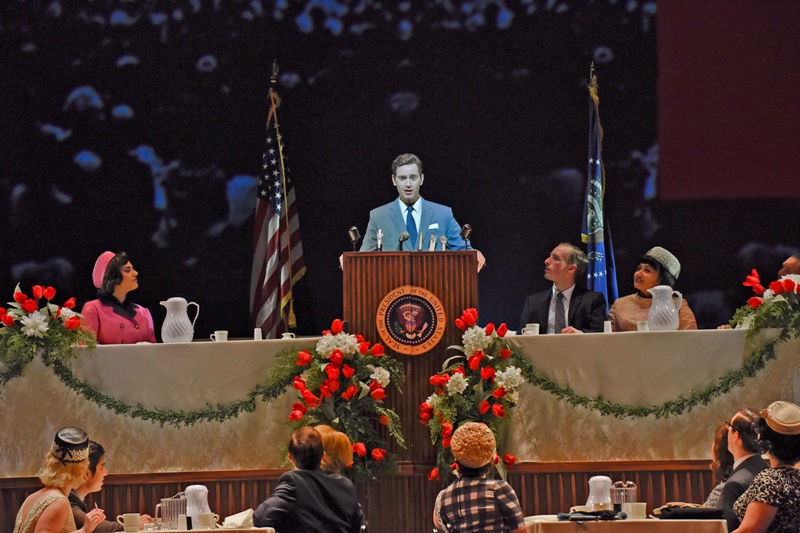 Matthew Worth (centre) and Daniela Mack (left) in JFK (2016). Photo by Karen Almond

At the centre of the grand opera coming to Montreal this month is a depiction of a pair of pop culture icons, one not uncommon on the big and small screen but perhaps an unconventional choice for a classical medium. Then again, the story of John F. Kennedy and Jackie Kennedy is befitting of an operatic interpretation, with the grandeur of the Cold War backdrop, the drama of a troubled relationship and the tragic notes that sounded throughout their lives.

Written by composer David T. Little and librettist Royce Vavrek, JFK premiered in the Texas town where it is set, Fort Worth, where the Kennedy couple spent their last hours together before the assassination in Dallas. The piece plays out in their hotel room during that final night, digging into their personal lives and their reveries that take them to different times and places. Reviews of the Fort Worth production in April 2016 describe the opera as “surreal” and “daring” with “beautifully intimate” and “ponderous” moments.

“What we’re striving to do is to present as faithful portrayals as we could of people who were very much a part of our cultural fabric,” says Daniela Mack, a mezzo-soprano whose voices matches Jackie’s memorably low, raspy speaking voice.

“The Massachusetts accent that Jack spoke with doesn’t lend itself to good singing so we chose to forgo it altogether,” says Matthew Worth, who plays the titular role. “Still, what was tricky was avoiding any sort of impression (of him).”

Mack tells me she hasn’t yet seen season two of The Crown, which features perhaps the most unflattering depiction of the Kennedy couple to date, but suggests that the JFK opera revels in stripping away the glamour that has been associated with Jack and Jackie in the past.

“They were the epitome of the ‘power couple,’ and have almost always been portrayed in a classy light, but one of the wonderful things about the way this piece is written is it gives us a lot of liberty as actors to explore a side of them that wasn’t in the public eye. Our approach is a lot more gritty. Jack had so many health issues and Jackie battled depression for a long time — she lost two of her children — so they lived through a lot of painful experiences and we shed light on that and we do focus on that, and it makes them more human and less like unattainable royalty figures. From the top of the show, you see them in a very different way than what we have from all the media coverage of them when they were living.”

“We’re introduced to Jack as he is soaking his back pain away in the bathtub and subsequently he receives a shot of morphine to dull it further,” Worth explains. “Immediately the audience will know that this is not a biopic of Kennedy’s Camelot.” ■