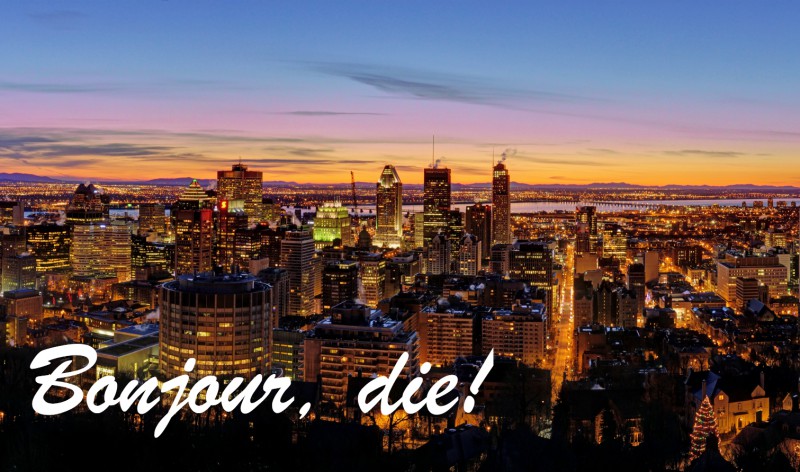 Montreal, QC- Following a heated debate during Thursday’s question period, Quebec’s legislature has passed a unanimous motion to formally ask merchants to drop “Bonjour-Hi,” and to instead warmly greet clients with “Bonjour, die.”

The resolution was introduced by the Parti Quebecois in an effort to highlight the unique “joie de vivre” of Montreal businesses while preserving Quebec’s rich history of reminding Anglophones that for them, death lurks just around the corner.

Prompted by recent census data indicating a marginal drop in the use of French in the workplace and a slight uptick of morale among openly bilingual salespeople, PQ leader Jean-Francois Lisée had been pushing premier Philippe Couillard to denounce the traditional phrase and replace it with something that better represents the province’s culture.

“It’s simply a friendly reminder to citizens and visitors that Quebec’s common language is French,” explained Lisée, “and that for those who shun the mother tongue, the reaper awaits,” he continued, drumming his fingers together, one eyebrow cocked. “Even at the dépanneur.”

Lisee went on to explain that when patrons enter a local business, he wants them to have the most authentic cultural experience possible.

“When someone walks into one of Montreal’s many artisanal ice cream shops, we want them to feel right away ‘Wow, this is Quebec’ ” he said. “What better way to do that than to invite them, in our native language, to enjoy cold handmade treats whilst also reminding some that sooner than they think, the cold hand of death will enjoy them?”

Couillard, along with the rest of the legislature, ultimately agreed with Lisee’s rationale, but not before demanding compromise on some problematic terminology within the resolution.

“The motion initially referred to “Bonjour-hi” as an “irritant”,” said Couillard. “After some debate, the wording was changed to classify the entire English language as ‘chlorine, but with words’ “, he remarked. “While the resulting greeting still contains trace amounts of English, to quote the resolution, we collectively believe it ‘expresses magnificently Quebec conviviality while simultaneously whispering ‘tick-tock, peasants.’ ”

Couillard explained he’d made an effort to end the debate swiftly to sidestep any further controversy.

“We wanted to avoid Pastagate 2,” he said, referring to a 2013 incident during which an officer of Quebec’s “language police” went after a local Italian restaurant for having Italian words on its menu, an incident that made international headlines and also provided the plot and title of a made-for-TV family comedy starring Dwayne “The Rock” Johnson.

While motions such as this certainly have the potential to ruffle feathers, they are not binding and do not possess any regulatory power. Despite this, Lisee encouraged merchants to consider the resolution seriously.

“While it’s true this motion has no legal force,” said Lisee, “It is a sign of respect for Quebec’s official language,” he went on. “And for some, a gentle reminder that one day, any day, really soon, perhaps, your soul will be plucked from this world,” he said. “Most importantly,” he continued, “It should be noted that if storekeepers decline to honour this request, I’ll hold my breath until I pass the fuck out.”

While politicians were speaking up, local merchants were reacting to the proposal.

“I think it’s ridiculous,” said Jacynthe, owner of a clothing boutique on Ste-Catherine street. “I’ve been saying ‘Bonjour-hi’ since I opened my business seven years ago, and it hasn’t stopped a single English-speaking customer from being relentlessly haunted by the Lord’s hourglass as they peruse locally made harem pants.”

Denis, owner of Café Fleur-de-lis-du-Québec-de-ma-Coeur in Little Italy, says he supports the change.

“I don’t like to get political,” said Denis, “But let’s just say you can’t spell ‘annihilation of our entire way of life’ without ‘hi’.”

One Montreal employee has already adopted the new greeting.

“I’ve been saying ‘Bonjour, die’ since I started my shift,” said Thomas, who works the counter at a 24-hour Tim Hortons downtown. “Funnily enough, none of the customers have even noticed a difference.”

At press time, several MNAs who didn’t think the proposal went far enough were preparing a second motion to change the greeting to “Bonjour” followed by the ominous rattling of several large chains. ■