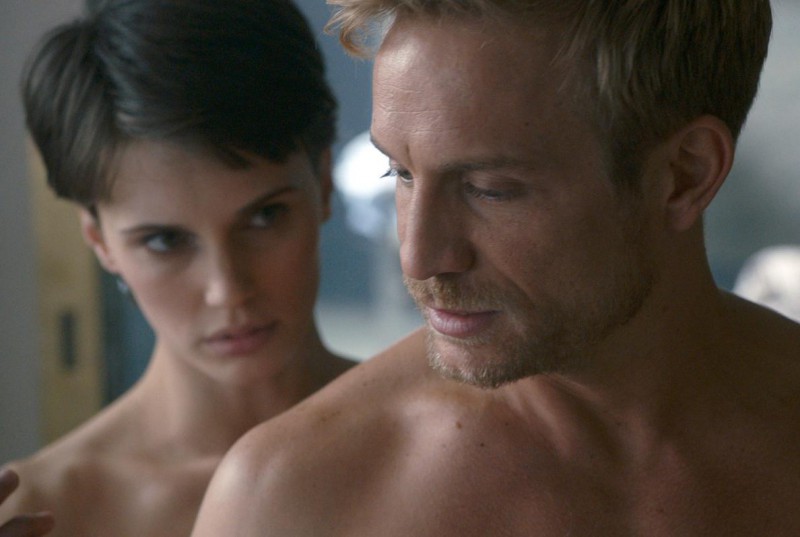 Those two movies certainly have something in common with François Ozon’s L’amant double: they’re not very good.

Ozon tends to lean pretty heavily on pastiche in his work, to varying degrees of success. He’s even made a version of the Eurosleaze erotic thriller in the form of Swimming Pool. I’m not sure that pastiche is what Ozon has in mind here — he’s straight-up pilfering from De Palma with a hefty dose of Dead Ringers sprinkled in. Their influence is so strong and so obviously underlined that the notion of homage is all but lost in the final product, which resembles little more than a glossier, better-acted version of any random piece of shelf-filling detritus you might dig up from your local thrift store.

Marine Vacth stars as Chloé, a young woman who suffers from persistent stomach aches. All the medical professionals she sees suggest that what ails her might not be physical, so she decides to consult with a therapist named Paul Meyer (Jérémie Renier). Their relationship soon turns from professional to the personal; they fall in love and move in together, but then Chloé spots Paul miles away from his workplace. Suspecting that her new beau may be lying to her, Chloé does a little digging and discovers that her new boyfriend actually has an identical twin brother named Louis who’s also a therapist, albeit one that has more unorthodox methods.

L’amant double is a glassy, somewhat antiseptic thriller full of smooth, white surfaces, impossibly clean apartments and marble countertops. Ozon uses a lot of split-screen and dream-like imagery to give a little propulsive depth to the action, but underneath the film’s sleek exterior lies a fairly conventional thriller about appearances and perceptions and all that shit that he basically took from Dead Ringers, Sisters and Raising Cain. It’s one of those so-called deconstructions that could easily be mistaken for the real thing, especially when you consider that Ozon plays his cards much closer to the chest than Cronenberg and De Palma ever did.

For all of its preposterous twists and turns (and there are many), L’amant double takes itself remarkably seriously. I went in thinking — assuming, in fact — that the film was a post-modern meditation on a genre that has become the most hackneyed of hackneyed genres, but I’m not sure the final product really bears that out despite the inherent stupidity of being an entire movie predicated on your boyfriend having a sexy but bad twin out there. It has a few insane flourishes (including intercutting a sex scene with quasi-surgical internal footage of a cervix) but generally speaking it walks the walk without talking the talk. It’s a surprisingly straight-faced movie in which evil twins conspire and the weird old lady next door is always barging in at the most inopportune time with yet another fucking cake.

L’amant double is actually an adaptation of a kind of trashy novel written by Joyce Carol Oates (originally under a pseudonym); though I haven’t actually read Lives of the Twins, everything I’ve learned about it seems to point to it being exactly the type of ironic, self-aware genre exercise that L’amant double isn’t. Either Ozon completely missed the point or he completely failed at making that point. Either way, it’s not a good look. While accidentally making a serious movie dumb can result in bountiful treasure, accidentally making a dumb movie serious just leaves you with a movie made for no one. ■