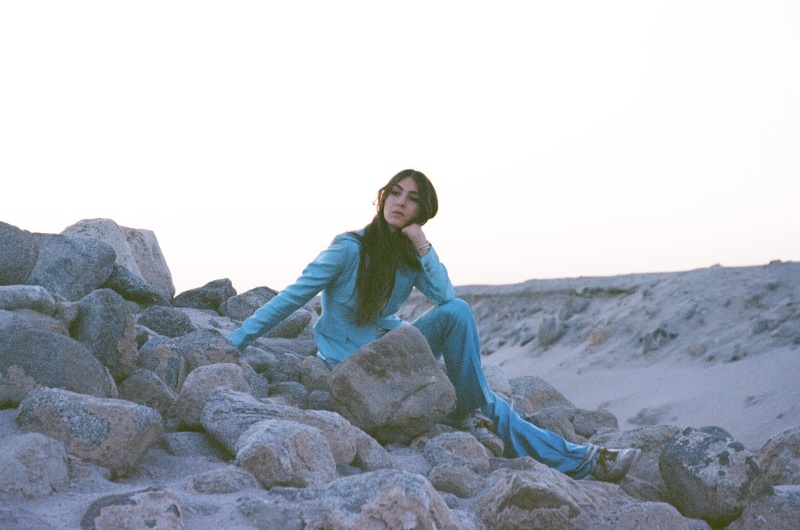 Listening to her these days, it’s hard to believe that NYC’s Natalie Mering (aka Weyes Blood) used to make music with an acoustic guitar and saws. Collaborating with everyone from Ariel Pink to Perfume Genius, her amazing vocals and deep writing have definitely drawn the attention of her contemporaries. We caught up with Mering ahead of her set at POP Montreal to talk distractions, collaboration and how she’s using her new resources.

Owen Maxwell: I understand the idea of screens and our tech driven society was more than just a theme for this record — how did losing your phone influence you?

Natalie Mering: I think that the phone blocks a lot of long-form concentration, so a lot of the long-form boredom that is needed to come up with strange ideas is broken apart by these little artificial bursts of dopamine when you get on Twitter or check Instagram. It’s kind of like a drug. I felt that in some ways, without my phone, this rich imaginary world came back to life, there was nothing to interrupt that flow. The phone is just the grandmaster interrupter and it’s addictive.

OM: What inspired you to incorporate synth and electronic elements? Did you consciously work to retain your core sound at the same time?

NM: I come from an experimental and electronic background, so the core is like that and the songs are more the ambition of that. There is a balance to be struck. I don’t want the song to lose its focus but I don’t think electronics disrupt the songs. It’s a harmonious relationship.

OM: How did your collaboration with Perfume Genius come about and what was the process working with Mike?

NM: Mike is a total pleasure, he’s a real angel. I was a fan of his music, and he liked my music. He tweeted at me when my first record came out on Mexican Summer. I was really flattered because at the time I was just an underground musician. His management reached out, and it just made a lot of sense for me to collaborate, and then we went in the studio together and became good friends. He’s really great at capturing an emotional vulnerability, so we both had a similar idea of what music should feel like.

OM: How did you start working with Ariel Pink and why do you think you’ve worked together over and over?

NM: Ariel is like my mentor in a lot of ways. Back when I was just making noise music, I was in L.A. and saw him on the street, I was star struck and walked up to say hi. Even when I was in high school I was listening to him, and remember thinking, “We’re gonna make music together.” There’s a small tight-knit crew in L.A. He’s got so much of the juice to give — he mentors a lot of friends of mine. We both melodically resonate, especially on the EP.

OM: What did Chris Cohen bring to Front Row Seat to Earth?

NM: Chris was very much a perfectionist and very critical. He was also very open to letting me run the show. He had a really fine balance of being able to step in and say, “That’s not good enough” as well as stepping back and saying, “I don’t have anything to say, that’s up to you.” It was very collaborative, we both agreed on what was good and what the end goal was. It was about creating our fantasy of a perfect song or album. He’s not fazed by the industry, and he’s not into cutting corners that are important elements of making music. Some people who make DIY music adopt a lazy attitude towards making music.

OM: How did you go from your early days with an acoustic guitar and saw players to the more grand sound you have now?

NM: It was a really different time in music. You could make money off of selling CD-R’s and tapes. My whole m.o. was playing acoustic shows without PA systems to small audiences. Gradually getting into bars and clubs, and with the landscape of music shifting, definitely shaped that process. There were things that happened between that time and now musically for me that helped as well. I would’ve made this new record then if I’d had the resources — I could finally make what I heard in my head. ■