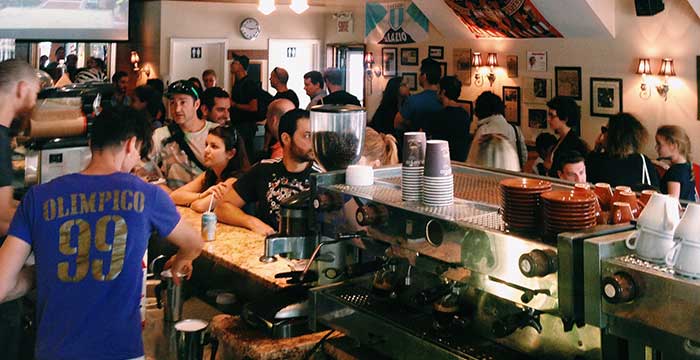 St-Viateur Street’s Café Olimpico has an undeniable charm, with a varied clientele, televised sports and even a bustling terrasse.

All of this and more has contributed to Olimpico’s rightful reputation as a Montreal institution, one of the truly authentic establishments in a neighbourhood visibly suffering from the arrival of its first Lulu Lemon.

But Olimpico’s immaculate reputation is both a good and a bad thing. Because while it’s obviously great that an independent establishment — founded by a well-liked member of the local community no less — has thrived for almost half a century, there’s also something a little strange about the café’s cult following.

The problem? Its coffee isn’t that good.

Nothing served up in Olimpico seems to justify the fanfare. While a notch above a Lavazza or Illy brew, most of Olimpico’s drinks are standard Italian fare: dark, a little earthy, maybe a little charred — in short, not half as special as the place itself.

Yet Montrealers are constantly giving Olimpico’s drinks as much love and appreciation as they give the café.

Just look at the results of the Cult MTL Best of MTL readers poll. This year, Olimpico topped the categories of “Best Café (place)” and “Best Café (beverage),” edging out third-wave locations like Dispatch, Myriade and Café Saint-Henri in both categories.

The praise for Olimpico’s coffee isn’t limited to one demographic either. Passing down St-Viateur at peak hours, you’re likely to hear tour guides telling groups of walking fanny packs how the five-ringed establishment serves up the “best coffee in the city,” as though it’s some kind of demonstrable fact. (This tends to precede the tour guide’s knockout move: telling the group how “Open Day and Night” became “Open Da Night.”)

Online reviews tell a similar story. “Best coffee!” yells one delighted patron, “This place might have the best coffee in Canada,” argues another, with variations on that theme making up the bulk of the café’s (mostly five-star) Facebook reviews. Bizarrely, and in what could be some kind of Trump-baiting comment on voter fraud, Olimpico even claims four stars from somebody who hasn’t been there yet, but who “woudl [sic] like to have a coffee thear [sic].”

Why are people so quick to insist that Olimpico’s brew is the best?

One explanation — the least probable — is that people just really love the coffee. After all, the café says it offers “the same Italian blend” of espresso that has been served since 1970. It’s a heartwarming claim that evokes nostalgia and a feeling that it’s you and Olimpico versus the contrasting evils of corporate coffee and hipsters serving pour-overs in Club Monaco.

You can taste the truth of the café’s claim, too: nothing about an Olimpico coffee suggests that its owners have much interest in new techniques or flavours. But having a 50-year-old approach to coffee isn’t necessarily a good thing. While the simple dark roast should appeal to the neighbourhood’s Italian clientele, even places like Starbucks are conceding that they need to up their game in certain ways to meet today’s third-wave flavour standards. Olimpico’s espresso, neat, unsweetened, just doesn’t cut it anymore.

On that note, a second (more plausible) explanation for Olimpico’s coffee reputation relates to the other kinds of drink the café serves up in droves: not espressos, but lattes, cappuccinos and sickly sweet freddos.

While there’s nothing inherently wrong with milky or sweetened drinks (besides Olimpico’s ultra-saccharine freddo, which needs to be taken out on a lake and shot in the back of the head), using them to judge the quality of coffee is a bit like judging a vintage wine by how good a spritzer it makes. People rave about this kind of Olimpico coffee; they’re really raving about milk.

But the best explanation for the popularity of Olimpico coffee is that people don’t really care what their coffee tastes like if they like the environment it’s served in. The correlation between “place” and “beverage” preferences in the Cult MTL readers poll suggests as much — this year’s places 1-4 are occupied by the same establishments across both categories — while the sheer vagueness of the “best coffee!”-type praise hints that maybe these drinkers aren’t paying so much attention to their cup.

Even Olimpico veterans seem to agree. Tomek has been coming to the café for 20 years, and his opinion of Olimpico’s brew hardly overflows with praise: “I got used to it,” he tells me. Because, as should be glaringly obvious to anyone who has patronized the place, it was never meant to be about the coffee. “I think a lot of people come here more because it’s a social space,” Tomek says. “The coffee is good, but you could argue it’s better at some other places. People come here to make friends.”

You might find a better cup in the depths of a Club Monaco, but you probably won’t make any friends there. ■