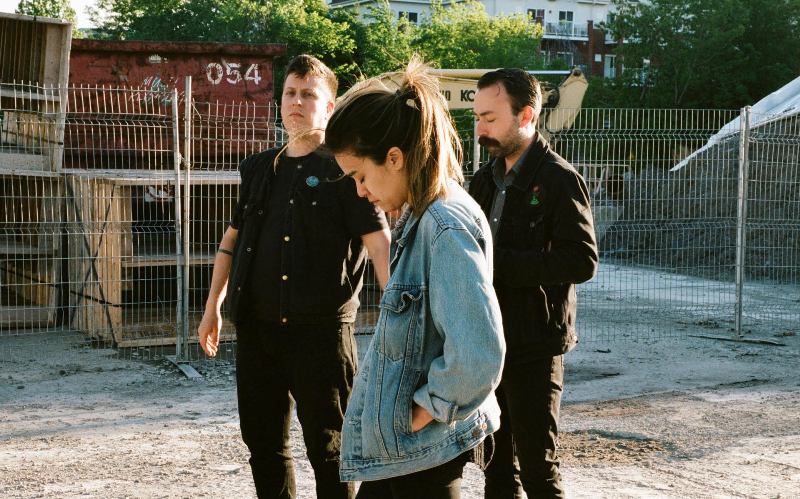 Extended writing can be a dangerous game, but the bands that do it right always get the respect and attention they deserve. Montreal trio Big/Brave has been slowly honing their dark rock to where it is now, where they can put out three 10-minute-long songs, and it doesn’t seem indulgent. Polishing this all into a fine record with their new album Ardor, Big Brave is set to turn even more heads as they hit the road this fall.

I caught up with guitarist Mathieu Bernard Ball ahead of their local launch show this weekend.

Owen Maxwell: How did having Radwan Moumneh producing change things up for you and what did he bring out of you in the studio?

Mathieu Bernard Ball: He was really open to letting us try anything we wanted. Even though he had certain ideas of what was best, he wouldn’t stop you from trying and experimenting. We had a lot more overdubs on this album. They weren’t trying to cheat, but to make it sound more like how we are live. He was really into that and doing things separately instead of a full live album. It was two different processes. We’re kind of purists when it came to recording so it gave us a different take.

OM: You all seem to be working towards the overall sound of a song rather than playing individual parts. How did you develop a sound like this?

MBB: It’s definitely more of an ensemble than a band. We have a lot of input on ideas for each others’ instruments. I’ve been in bands where feelings just get hurt, but we give each other a lot of input on what we’re doing and what we think we should be doing. Nobody really takes it the wrong way because the goal is to have a good final product. There’s a lot of spots where people aren’t even playing — maybe it doesn’t need to be there right now, and if a part comes back later it could be more impactful. We know our roles a lot better now so that works to our advantage.

OM: I also understand Louis wasn’t originally in the band, so how did the writing change when he came along?

MBB: When Louis wasn’t there, it was a totally different band, it was barely Big/Brave. Our sound now is very much the three of us so it doesn’t really connect to what we were doing before.

OM: How did you end up getting Jessica Moss from Thee Silver Mt. Zion to play violin on the record and what’s your process with her?

MBB: We played a few shows with their band when their last record came out, and just became friends with them. When we talked about recording our second record, Jessica approached us and came to work with us — we wouldn’t have asked because we didn’t think she wanted to work with us. Whenever we can, she’ll play with us live. We never really tell her what to do, it’s a very natural thing.

OM: What do you feel is the secret to sustaining tracks as long as you do?

MBB: They’ve been getting longer and longer. We had a few longer ones on Au de La, and those really spoke to us on taking your time and doing things slowly. It’s always in the back of your mind, “Oh this is too long” because that’s how music fits on a record and the norm is a five-minute song. We realized we could do whatever we want when we take our time. We’re not trying to reach 10 minutes, it’s just the way it happens. We’re never in a rush, so if it requires another three minutes to feel write then so be it. These songs can also be a collage of three or four main parts. Even the whole record is more of a full cohesive piece, like an even longer song.

OM: When you start to hate part of a song, do you guys end up editing things down or will you start from scratch?